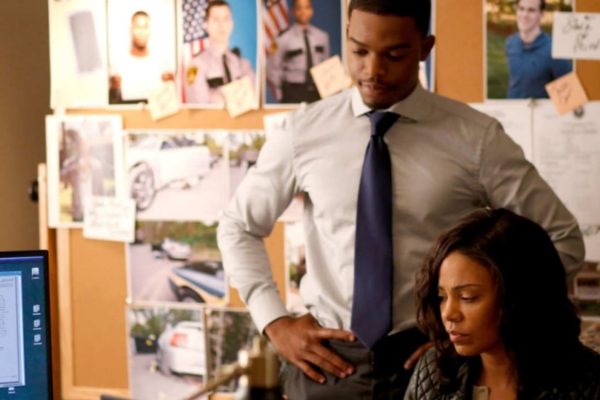 About as current and topical as you can get, Shots Fired is a remarkably powerful 10-part miniseries that takes on police shootings, political corruption, racism and small-town religion in a North Carolina community. And to be honest, it surely ranks as one of the most ambitious projects that the FOX network has taken on for scripted prime time television. I admit I resisted watching the series myself initially because the alarming rise in police shootings nationwide is so painful to re-experience even in fictionalized form. (RIP Michael Brown, Alton Sterling, Philando Castile and countless others.)

From the get-go, the script flips expectations by having a black cop, Officer Beck (Mack Wilds), shoot a young, white man during a routine police stop. The Governor (Helen Hunt), who is under intense political pressure, calls the Justice Department to send an investigation team: the young, cocky prosecutor Preston Terry (Stephan James) and a deeply-damaged colleague Ashe Akino (Sanaa Lathan). Preston and Ashe quickly realize that they have been brought in simply because they are African American. Yet while Ashe resents being used as a pawn, Preston sees this as a career-making turn, which leads to some serious sparks as they bump heads about how they should investigate.

Within the first hour, you’ll realize that the accidental killing is just the tip of the iceberg. There’s also another case that the community doesn’t want to be forgotten — a young, black man whose death has been largely ignored by the local Sheriff’s department. Shots Fired has shady characters at every turn. Can you trust the local law enforcement whose ranks are filled with good old boys led by enigmatic Sheriff Platt (Will Patton) and conflicted family-man Lieutenant Breeland (Stephen Moyer)? What’s up with wealthy businessman Arlen Cox (Richard Dreyfuss) who seems to pull strings in multiple branches of the government? What’s up with that camera-loving Pastor Jane James (Aisha Hinds) whose crew of young male congregationalists is ready to dispense justice vigilante style? In short, everyone seems suspect on some level.

Yet this isn’t your conventional whodunit. Indeed, one of the nicest surprises is how much we see parenthood in almost every hour of Shots Fired. Ashe is battling her ex-husband for custody while struggling with PTSD. The two grieving mothers (Dewanda Wise and Jill Hennessy) strike up an unlikely friendship over losing their sons in violent shootings. Even the governor and local lieutenant are given onscreen moments revealing vulnerability through interactions with their own children. You see, the kids are watching and responding to the actions in the adult world and by allowing us to see these intergenerational interactions, we’re reminded how our actions are our legacies.

How do racism, corruption and politics all play a hand in making police shootings nearly impossible to prosecute in this country? Shots Fired definitely zeroes in on those complexities. Though this isn’t a documentary, you’ll definitely be thinking of the tragedies in Ferguson, Missouri and Tulsa, Oklahoma. This show should be commended for shining a bright light on how the media is guilty of covering police shootings and victims differently based on racial biases. Yet somehow the program doesn’t boil it down to good guy vs. bad guy. The show constantly elicits empathy for all the players at different times. That’s something we sorely need during such a troubled time in our country. So don’t turn away from the screen. You can be enlightened while being entertained.