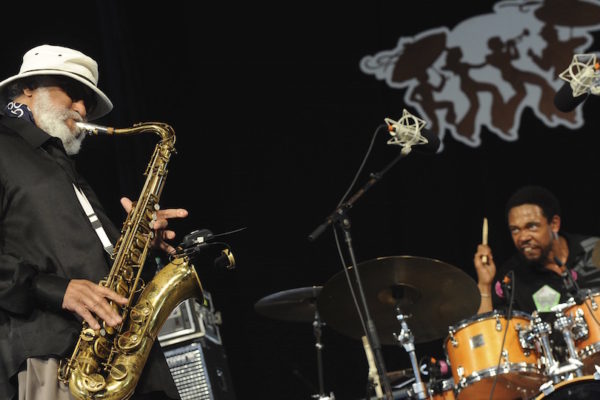 Sonny Rollins emerged on the jazz scene in the late 1940s, making his first recordings just one year after graduating high school. His early professional years would see the saxophonist working under the tutelage of some of the form’s finest innovators, including Bud Powell, Charlie Parker, and Thelonious Monk.

Rollins would ultimately incorporate the approaches and techniques of such would-be icons into his own music, which would evolve to become a melting pot of sorts of prominent forms throughout jazz history.

Rollins’ arrival on the scene just following the height of the bebop era would greatly benefit his musical and artistic development in subsequent years. This early period could be considered one of assimilation for the musician, as he internalized the complex harmonic structures and technical virtuosity which characterized the works of pioneers like Parker and Monk.

But the substantial influence of bebop – which was felt to a much greater extent by the musicians themselves than by the record-buying public – was quickly being leveraged in the development of new forms of musical expression.

At the forefront of these new developments was a musician who collaborated not only with Sonny Rollins early in Rollins’ career but also with bebop pioneers Charlie Parker and Dizzy Gillespie. That musician was Miles Davis, and in subsequent years, he would apply the musical interest of bebop to a more accessible melodic approach, eventually giving birth to the cool jazz subgenre.

This attention to melodicism would become yet another arrow in the quiver of Rollins, whose development would be disrupted in the mid-1950s by a worsening drug habit. During this time he relocated to Chicago in what would be a successful effort to get clean.

Soon after returning to music and recording with the Clifford Brown-Max Roach quintet, Rollins released perhaps his most highly acclaimed work, 1956’s Saxophone Colossus. The album, which also featured Roach on drums, is considered a jazz milestone. Shortly after the album’s release, one critic noted Rollins’ meticulous development of his solos “with great architectural logic.”

The album is a striking example of Rollins’ significance as a musician, demonstrative not only of the articulation, precision, and speed he had developed during his time studying bebop, but also of the commitment to expression and melodicism in the music. One might call Saxophone Colossus the halfway point between Bird and Diz and Kind of Blue, which would change music altogether in 1959.

All this was accomplished while maintaining the palpable sense of swing which had characterized Rollins’ playing from the beginning. These musical elements, indicative of the approaches of fellow heavyweights like Parker and Davis, were compounded by an almost spiritual search of the music from the inside.

This musical restlessness, in many ways, echoed the process of another emerging musical innovator; a young man who would collaborate with many of the same names as Rollins, but with whom Rollins would only ever make a single known recording, which can be found on 1956’s Tenor Madness by the Sonny Rollins Quartet.

The musician in question is one John Coltrane, an unrelenting musical innovator who, throughout the course of his 40 short years on this earth, changed the parameters by which music is created and perceived.

Coltrane’s quest for progress took his music to extreme territory, which some considered to be detached entirely from any of the preconceived musical structures and ideals defined by jazz in any era. 1967’s Interstellar Space and other recordings made near the time of his passing best demonstrate the gravity of the man’s frantic musical quest to attain something beyond the realm of human understanding.

Rollins’ work, similarly, was characterized by a seemingly perpetual search for something beyond the status quo. But unlike Coltrane, Rollins’ music remained grounded in the sense that it sought to push these boundaries within the confines of existing musical structures. This endowed the work, even at its most defiant, with a conceivability that opened it up to the less sophisticated listener without sacrificing the rhythmic and harmonic integrity of the music.

The coalescence of these aforementioned elements, along with a number of others, endow the work of Rollins with a unique dimension that echoes many of the most significant musical innovations of jazz from some of the most progressive and accomplished periods of the genre’s storied history.

These ideals are implemented with sincerity and artistic authenticity, however, which deflect the materialization of anything approaching contrivance. Rollins was a musician willing to walk through the open flame. In times during which the muse was elusive, Rollins would unashamedly meander melodically, dutifully search for the next turn of phrase which would liberate the floodgates of creativity and allow the music to ascend to its purest form.

The overarching influence of Rollins in comparison to contemporaries such as Miles Davis, John Coltrane, Charlie Parker, and others is a matter of debate. But the skillfully executed and artistically legitimate representation of all these innovations and more through the singular work of one musician is, by modest estimation, a staggering accomplishment.

This – compounded by the sheer listenability, accessibility even, of Rollins’ output at its highest level – should more than secure the man’s place in the jazz pantheon as one the greatest all-arounders and advocates for the advancement of the form in its expansive history.

Historically averse to studio recordings altogether, Rollins’ sprawling discography features a number of unapologetic duds – a testament to the musician’s commitment to artistic transparency and to the embrace of the moment, even at times when the moment in question is less than ideal.

Whether exploring the glistening sonic expanse of Saxophone Colossus, the improvisatory prowess of A Night At The Village Vanguard, or even the more divisive output from the 1970s, what one hears in the rich, inquisitive tone of Sonny Rollins’ sax playing is unmistakably the history of jazz itself.

0 comments on “Sonny Rollins: The Voice of Jazz History”