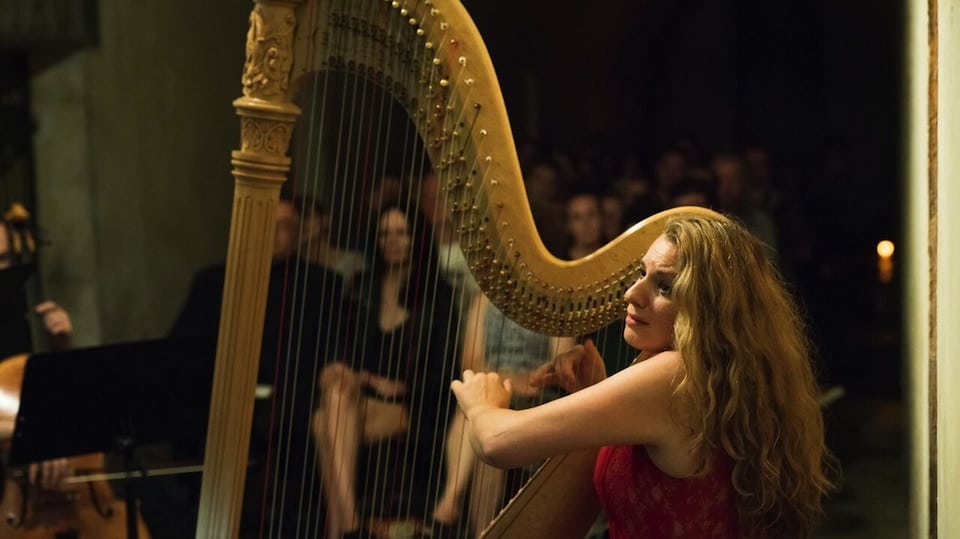 Editor’s Note: Much like Crypt Sessions, the enormously popular classical music series hosted at Manhattan’s Church of the Intercession, the Angel’s Share concert series take chamber orchestras, classical musicians, and opera singers into the bowels of the earth — in this case, the catacombs at Brooklyn’s Green-Wood Cemetery. This summer’s inaugural program includes the premiere of David Hertzberg’s new opera The Rose Elf, harpist Bridget Kibbey, the JACK Quartet, the piano-playing twins Christina and Michelle Naughton, and Gregg Kallor’s “Sketches from Frankenstein,” and a season finale entitled “Nightfall.” Writer Isa Freeling attended a recent performance in this new concert series. Her report follows below.

It was quite a night at historic Green-Wood Cemetery when the sky went dark and then darker still, as the wind howled and blew my finely coifed curls out of their sophisticated chignon into a “Bride of Frankenstein” frenzy as if I’d somehow unintentionally stuck my finger into an electrical socket. I had that kind of a wild mess of hair. But along with 80 others, I was not to be deterred by such a fashion faux pas. I was there to see Bridget Kibbey play the harp in the catacombs and it was, in some ways the perfect night, for such an affair. The sky was ablaze with lightning while the booming sound of thunder shook the air. Even my bus driver, who resembled Lurch, seemed to be in on the ghoulish program.

Entitled “The Sacred and The Profane,” Thursday night’s concert featured not just Kibbey (who was decked out in a lace gown of raspberry) but also her friends Chad Hoopes and Grace Park both on violin, Matthew Lipman on viola, and Mihai Marica on cello. And all were calling upon the ghosts of superlative musicians. And why not? West Side Story composer Leonard Bernstein, the 19th century “King of Pianists” Leon Moreau Gottschalk, and one-time A.M.E. Church choir leader Susan McKinney-Steward are all buried nearby. It appears Kibbey and company’s calls were answered, too, as the music produced was indeed superb. In the eerily narrow catacombs (which date back to the 1850s), souls interred for over one hundred years were suddenly awakened from their slumber to the strains of Saint-Saens’ “Fantaisie,” Debussy’s “Danses Sacrée et Profane,” Bach’s “Toccata and Fugue” in D Minor, and Britten’s “Lachrymae.” All that was missing was the ominous sound of spectral organ music.

Additionally, Kibbey regaled the audience with a retelling of Edgar Allen Poe’s “The Mask of the Red Death,” a classic short story in which everyone falls dead at the end of a ball. It was a creepy interlude that came just before her last piece by Caplet: “Conte Fantastique.” If Thursday night’s program — entitled The Sacred and the Profane — is any indication, then Andrew Ousley and company are curating some uniquely fabulous classical music experiences not far from Park Slope. In fact, the buzz is such that nearly all the shows have already sold out. Click here to find out which concerts in “Angel’s Share” still have tickets available. You’ll be heavenly glad you did.

0 comments on “Soul-Stirring Music in the Green-Wood Cemetery”