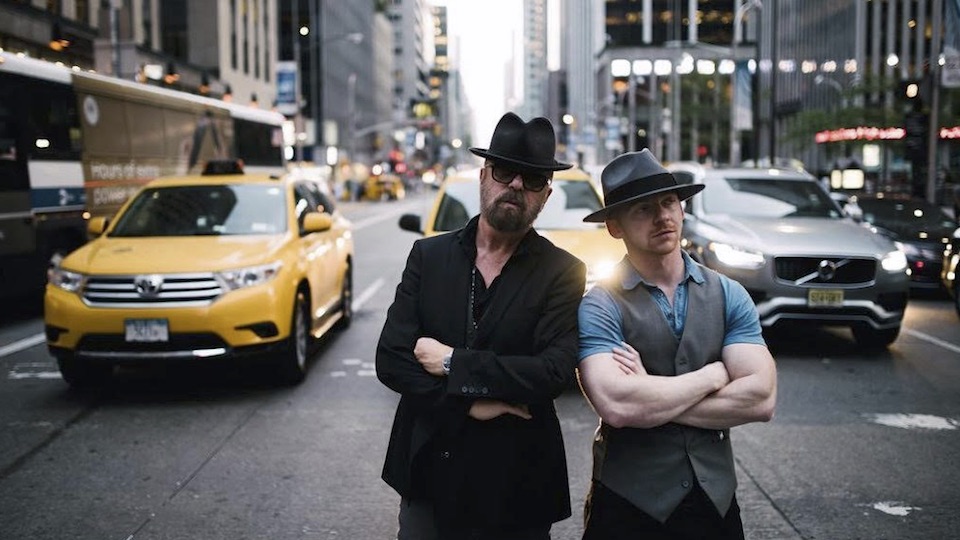 Dave Stewart is many things to many people. For seventies punk fans, his was the mercurial guitar that soared through The Tourists blistering “I Only Want To Be With You.” During the 80s, he and Annie Lennox created some of the edgiest hits of the era with Eurythmics. For Tom Petty admirers, it was Stewart’s idiosyncratic ear that turned “Don’t Come Around Here No More” into the trans-generational hit that it is. And then there are the legion of Beatle fans who would like to personally congratulate Stewart for his work with singing drummer, and venerable knight, Ringo Starr.

Collaborators seem to prop up from everywhere – even Twitter. “Someone in the studio found it,” Stewart says. “I can’t quite remember what it said. It was something like, ‘Would love to work with Dave Stewart, love The Eurythmics.’ It seemed to come from someone who was shy.”

And then he listened to the recording. “I thought it was the sound of an African American, and then I see this ginger, skinny white kid singing! I don’t know how best to describe it. I think it’s like… Nina Simone. Thomas has that quality.”

Thomas Lindsey, a shrill, sharp vocalist with gusto to match, was one hell of a find. Lindsey had the chutzpah to approach Stewart; the talent to sing with Stewart; not to mention the encyclopedic knowledge he had for a style of music close to the guitarist’s heart. Travelling, however, was a drawback.

“This was six, seven years ago,” Stewart says. “I sometimes play at The Troubadour in Los Angeles. We call it Dave Stewart and Friends. I invited him to sing, so he sang three numbers. Everyone was blown away! But he told me it was his first time on a plane – first time outside of Louisiana! So, I said I could send him some ideas, so he wouldn’t have to leave his mum’s house. We made an album a couple of years ago called Spitballin.’ We’d kind of done the lock-down thing before ‘The Lockdown Thing.'”

In an age where a single Tweet came to bring two songwriters together, there’ s no shortage of avenues for listeners to discover new artists. And Lindsey, pure, prescient and powerful as he is, is worth discovering. “He’s admitted to all the vocalists that have inspired him,” Stewart chuckles.”Annie [Lennox] is right up there in the top. It’s like black, spiritual gospel with him. He’s got an impressive knowledge for someone his age. I’m talking about the new Dylan album, and then I’ll talk about one from the seventies. He’ll know that one, the new Dylan, and then he’ll talk about some bootleg of another artist. He’s not a normal person, let’s just say [laughs].”

Normality, familiarity, and dependability rarely breeds good art. Stewart, discussing the dangers of conformity, takes comfort from doing things the odd way round. “’Lord Save Us Today’ was written before the current situation. Thomas was experimenting with these voice notes, which I had to work out on guitar. I had to chop them up. I think he wrote all the lyrics to this album [Amitié], and we’d send each other ideas. Other times, I’d send him something fully formed for him to work on. It was me playing dobro in different hotels: Paris and Madrid, London too.”

The album, a nuanced portrait of long friendships, was born from the conversations, incompatibilities, and phone calls that drew these two unlikely collaborators together. Lindsey, who isn’t a born traveler, compensates by transporting listeners from the “Modern Age” to the “Soul Age.” “We call it blues, but it’s weird blues,” Stewart admits. “But for iTunes, and that sort of thing, the album is under blues. I come from the North, just outside Scotland. There’s Newcastle and I’m from outside Newcastle, Sunderland. I was interested in playing slide guitar and dobro. Similarly, in Ireland, it’s interesting that there’s uilleann pipes. The chords and inversions are strongly connected to Indian music, African music, and even, early blues. So, when people say North England and Ireland are into blues and they say that it’s the cold weather, that’s not true. It’s boiling hot in Mississippi! I think it’s because these places have been poor. Places like Berlin, Liverpool, Havana, Dublin, Memphis. Channeling through historic angst.”

Much like the album we’re here to discuss, friendship, collaboration, and passion are essential core elements needed to produce great music. Amitié – dependent as it is on Stewart’s piercing, picking parts and Lindsey’s aching vocal harmonies – is drawn from the comfort of friendship. It’s much more than a professional project; this is a deeply personal one.”It’s a French word, but ‘amitié’ also means ‘friendship’ in Creole. I got married twenty years ago, I think it was. It was a small, private gathering of people. Interesting group: Dennis Hopper, Bono and The Edge. Liam from Oasis was there! Then Bono talks about Brendan Behan – ‘Friendship Is Higher Than Love’. And then everyone starts playing that, singing ‘Friendship is higher than love’ for forty-five minutes. Thomas discussed all the people who have been with him at times. I don’t know if the album is a concept album, we didn’t go into it writing every song about friendship, but it’s definitely a theme of the album. Songs like ‘Brothers In Arms’ are about that theme. We also discussed that you can’t be someone’s best friend if you’re not best friends with yourself. It’s an old cliché, cause it’s true. Just like you can’t love someone if you don’t love yourself, you have to be best friends with yourself. And how do you become best friends with yourself?”

Stewart’s enthusiasm for music, not least this excellent project, is undiminished. Highlights of the album include the scorching “Storm Came”, the hypnotic “Liberation” and the genuinely affecting “Finding Freedom.”

It’s the sound of two men latching onto a genre they so dearly love, channeling both their truths and ours. “I produced a film in the nineties called Deep Blues. It was great getting to speak to some of the original blues players. A lot of it came from the mystical, spiritual, voodoo kind of way. A lot of stones in their pockets. We will be re-releasing in 2021 for the thirtieth anniversary. I remember when George Harrison’s All Things Must Pass came out, and thinking it was outstanding. He managed to bring out a pure tone, with a thick glass slide. Beautiful tone. There are slide players out there who can play, but you can’t always make them out. But you can always make out George. It’s like that with singers. I’ve stood six inches away from Aretha Franklin. I’ve worked with singers like Sinead O’ Connor and Nina Hagen. It’s like John Lennon, that character in the voice. It makes them more real. And bringing it back to Thomas, he’s got that. And in this sea of Flotsam bombarded towards people, I would like to wave a flag on this record because it’s two people exchanging friendship memos. It’s like listening to friendship letters, if you know what I mean?”

Stewart Lindsey’s Amitié will be released on digital and streaming platforms on Friday, July 17, 2020.