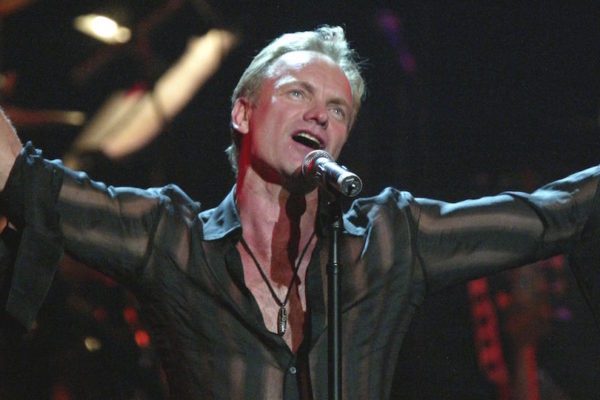 No one can deny that Sting is in a class by himself: he’s the ultimate pop star who has seamlessly incorporated the language of jazz into the pop lexicon. It’s easy to forget that Sting’s earliest gigs were jazz-oriented, including the Newcastle Big Band (where his yellow-and-black striped sweater earned him his stage name) and the fusion-flavored group Last Exit. After the monumental pop success of The Police, their charismatic frontman-songwriter stepped out on his own. But Sting’s first move as a solo artist was — unexpectedly for some — a slight return to his roots. For his 1985 debut LP The Dream of the Blue Turtles (and its accompanying tour), he surrounded himself with the top jazz and fusion musicians of the day. The “Blue Turtles” band not only redefined Sting’s sound and image for the future, but also expanded the limits of pop music in the process.

With the help of then-Musician magazine editor Vic Garbarini, Sting chose young musicians who were steeped in the tradition of jazz but also fully assimilated to the contemporary sounds of rock, funk and R&B. Pianist Kenny Kirkland was a rising jazz star as both a soloist and sideman with such notables as violinist Michael Urbaniak and trumpeter Wynton Marsalis. Drummer Omar Hakim had been with Weather Report since 1982, but was also a top session player recording with the likes of David Bowie and Madonna. Veteran NYC vocalists Dolette McDonald and Janice Pendarvis surrounded Sting’s powerful tenor with soaring harmonies. Sting also relinquished the bass chair to Daryl Jones, who was fresh from Miles Davis’ group. (Miles was initially irritated but ultimately supportive of his young protege’s move into the pop arena.)

Sting’s recruitment of saxophonist Branford Marsalis was a bold statement in itself. Branford had previously served in Art Blakey’s Jazz Messengers alongside his brother Wynton, who courted controversy in the ‘80s with his “jazz purist” rhetoric that openly criticized pop (and the jazzers who dabbled in it). Branford’s — and pianist Kirkland’s — appearance in the “Blue Turtles” band may have made for a tense Thanksgiving at the Marsalis home in 1985, but there’s no doubt that his signature voice on both tenor and soprano sax was essential to adding vibrant colors to Sting’s new, richer musical palette.

The seemingly random title of the album came from an actual dream that Sting had while recording in Barbados, in which he saw giant blue turtles crashing through the walls of his English garden and gleefully destroying everything in sight. The dream proved a perfect metaphor for the effect that Jones, Hakim, Kirkland, and Marsalis were having on Sting and his creative endeavors. Having unmoored himself from the constraints of The Police, he was forced to adapt to a foreign musical environment while finding his new artistic voice. The new band inspired Sting to boldly explore new territory as a songwriter, and in turn, elevated his music with their own unique sensibilities.

“Fortress Around Your Heart,” the third single from the album, is a prime example of Sting’s expert blend of jazz and pop. Subtle harmonic shifts are held together with a smooth melody and deeply personal lyrics as the band attacks the song with power and finesse. Over a foundation of Jones’ rock-solid bass and Hakim’s killer backbeat, Branford punctuates the choruses with gorgeous staccato fills in between vocal phrases. Branford’s masterful call-and-response improvisation off of Sting’s voice and lyrics signifies a musical relationship that has continued to this day. Elsewhere, the band swings its ass off on “Consider Me Gone,” and the Police deep cut “Shadows in the Rain” (the latter featuring an especially fiery keyboard solo from Kirkland). They throw down an irresistible island groove on “Love Is the Seventh Wave,” but evoke drama and tension for the dark social commentary of “Children’s Crusade” and “We Work The Black Seam.”

The band’s strong personality is also on display in the 1985 documentary Bring on the Night (and the double-live album of the same name). The film shows Sting and the band rehearsing for their debut performances in Paris, as they cross barriers that are musical, social, and cultural. It’s fascinating to watch the mighty pop star and his seasoned ensemble gradually come together with cautious optimism. The electricity is palpable whenever the band hits its groove, especially onstage. The live album in particular features some Weather Report-style, high-energy jamming in which everyone gets a chance to shine: Hakim’s drum solo in the film version of “I Burn For You” absolutely burns the house down.

Some critics of the day might have been skeptical of Sting’s new direction. But the fact remains that The Dream of the Blue Turtles is a nuanced marriage of pop and jazz, one of the best on record. Case in point: The album was nominated for four Grammys in 1986, including both Best Male Pop Vocal Performance and Best Jazz Instrumental Performance. The Bring on The Night film also won the 1987 Grammy for Best Music Video, Long Form. Although Sting’s band lineups have changed over the years, his commitment to the language and improvisational spirit of jazz has never left him; in later years he would collaborate with the likes of the Gil Evans Orchestra, Herbie Hancock, and David Sanborn.  In my humble opinion, he also delivers one of the definitive renditions of the Gershwin classic “Someone To Watch Over Me.” Sting might not have “filled the chasm” between pop and jazz, but he has certainly built an effective bridge.

1 comment on “Sting’s “The Dream of the Blue Turtles”: A Bridge Between Pop and Jazz”