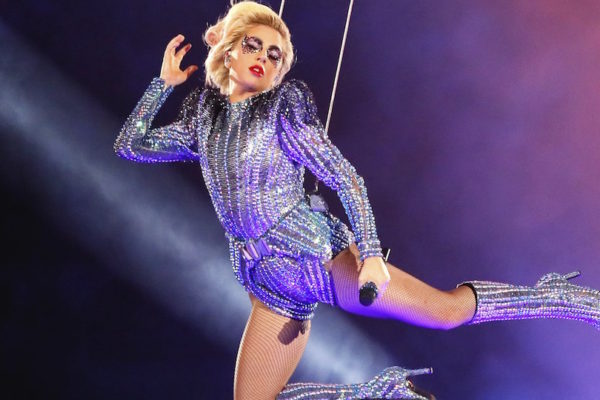 It’s the morning of Tony Bennett’s 90th birthday party, and a bare-faced Stefani Germanotta is lying on the couch in her New York City apartment, bawling because she’s having a painful muscle spasm. “Do I look pathetic?” she asks, covering her face while a massage therapist works on her. “I’m so embarrassed.” Moments later in Chris Moukarbel’s surprisingly intimate documentary Gaga: Five Foot Two, we see her simply going about the rest of her day: working with a trainer, getting briefed by her manager Bobby, and having her hair and makeup done for the party. By the time she arrives and starts performing a flawless, stripped-down jazz arrangement of “Bad Romance” for Bennett and a room full of industry heavy-hitters, she has become Lady Gaga, the superstar known around the world. The transformation is jarring; no one would suspect she was in excruciating pain and barely able to move just hours earlier.

This juxtaposition of hidden pain versus the expectations of fame is not exactly new territory for a documentary about a public figure. Yet, Gaga: Five Foot Two still somehow makes the subject-matter feel fresh; perhaps because its central subject willingly allowed director Moukarbel to film her in some of her most vulnerable moments free of the avant-garde artistic personas she’s crafted for herself over the years. In plumbing the depths of Gaga’s physical and emotional pain, Five Foot Two succeeds in creating an engaging, raw portrait of a woman for whom “the show must go on,” both personally and professionally.

But as the film shows, the line between those two things is often blurred, especially when it comes to Gaga’s music. “You have to go to that broken place in your heart to write songs,” she says during a break from working on latest album Joanne, “it’s like open heart surgery, making music. It’s invasive.” Her fifth studio album is her most personal, with much of the subject matter culled from her own broken engagement and the death of her aunt Joanne, for whom the album is named. In one of the film’s most emotional scenes, Gaga plays the title track for her grandmother while her father, Joe, fights back tears and ultimately leaves the room. After the song ends, she asks, “Did I get it right?” Her grandmother responds, “You did.” Shot cinema vérité-style, Moukarbel’s camera captures the pop star at perhaps her most human: a young woman simply trying her best to make her family proud.

And while her blood family is of the utmost importance to Gaga, she also feels familial obligations to her fans and the public. The self-dubbed “Mother Monster” is frequently shown being mobbed whether leaving Electric Lady Studios in New York or in the aisles of a suburban Wal-Mart she visits with her team to “check on how the album is doing.” One brilliant sequence intercuts old footage of a more outrageously costumed Gaga dealing with paparazzi and screaming fans with current footage of her in dark jeans and a grungy white tee obligingly taking selfies as she makes her way to her car. Once inside the deafening silence of the vehicle, she slumps down into her seat and puts her legs up on the dashboard, as though the 20 foot walk has completely depleted her. It’s a sentiment she echoes later in a heartbreaking, sobbing confession Moukarbel uses as a voiceover while Gaga is seen doing a glamorous late night photoshoot, “All these people will leave, and I’ll be alone. I go from everyone touching me all day and talking at me all day to total silence.”

Though Gaga clearly adores her fans, Five Foot Two suggests her relationship to fame is complicated at best. Early on in the film, she speaks of trying to control her own public image rather than doing what the record company or press wanted, “I always put some absurd spin on it, so if I’m gonna be sexy on the VMAs and sing about the paparazzi, I’m gonna do it while I’m bleeding to death and reminding you of what fame did to Marilyn Monroe and to Anna Nicole Smith…and what it did to…” She trails off but it’s clear she’s referring to herself. In an interview she mentions struggling with drugs, alcohol, anxiety, men, and of course, her physical pain over the last five years, but she doesn’t elaborate much, and Moukarbel’s camera unfortunately never presses her for answers (perhaps because Gaga also serves as a producer on the film).

Bookended by gorgeous shots of the singer being lifted high into the air on wires just before her killer 2017 Super Bowl Half-Time performance, the revealing documentary is ultimately one that keeps its famous subject firmly on the ground; whether hard at work in the studio or dutifully attending the baptism of one of her bandmate’s children. Lady Gaga’s name may be in the title, but the film belongs just as much to Stefani Germanotta. “I don’t think the world was ready to see who I am,” she tells the camera, “because I wasn’t ready to be myself.” Gaga: Five Foot Two proves she’s more than ready now.

0 comments on ““Gaga: Five Foot Two” – The Pain Behind the Fame”