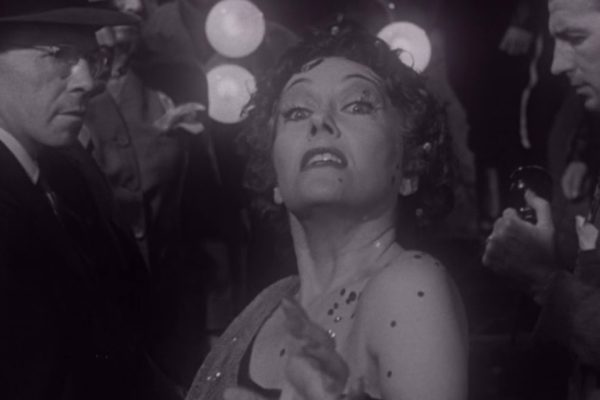 It’s official! On August 21, 2017, a total solar eclipse will be visible within a band across the entire contiguous United States for the first time in almost a century. This event is causing mad news coverage and a nationwide rush of preparation for safe viewing of this heliocentric magnificence. We at CultureSonar want to honor this golden moment in silver screen form and as such have whittled the large selection of “sun”-titled flicks down to six stellar entries. So whip out your smoked glasses to keep the dangerous rays at bay while getting the best possible visibility…indoors.

1. Sunset Boulevard (1950)
An undisputed masterpiece, directed and written by Billy Wilder and among the first batch of films to be preserved in perpetuity by the Library of Congress for its cultural significance, Sunset Boulevard is a creepy, cautionary tale of the cruelty of deranged stardom and the casualties it leaves in its wake. William Holden plays the doomed “kept man” of aging, obsolescent movie icon Gloria Swanson, who plays her tragic character Norma Desmond with dementia-riddled zeal. Swanson was 50 at the time but this ended up her signature. It is dark, funny, self-referential to Hollywood and utterly unique.

2. The Sun Also Rises (1957)
Adapted from an Ernest Hemingway’s novel. Still, The Sun Also Rises should be obligatory viewing for all those interested in the grand sweep of Cinemascope. The production values are spectacular and the cast is memorable (Tyrone Power, Errol Flynn, Mel Ferrer, Robert Evans, and the most gorgeously world-weary Ava Gardner). Many will be enthralled by the famous “running of the bulls” scene; others will be rightly horrified. Regardless of which side you fall on, this one remains a landmark in cinema.

3. A Raisin in the Sun (1961)
A poignant, even wrenching adaptation of Lorraine Hansberry’s classic 1959 play, this historic movie follows the plight of the Younger family, who wish to better themselves via a $10,000 life insurance windfall. That ten grand should make it possible to purchase a small home in a safer neighborhood but the brave, upstanding Youngers are up against the rot of racial prejudice as they look to make the move. The mere notion of a black family moving into suburban Clybourne Park throws its insidious residents into a tailspin of self-serving self-mindedness and bigotry. Sidney Poitier and Ruby Dee helm this memorable, humane classic that packs a powerful punch and sadly has not lost its relevancy.

4. Empire of the Sun (1987)
This is a worthy pic from Steven Spielberg’s canon of exquisite, sweeping, family-themed movies. It is the coming-of-age tale of a wealthy British schoolboy Jamie Graham (Christian Bale) living the soft life in Shanghai until he gets wrenched from his parents and placed in an internment camp by the Japanese in World War II. He gets friendship and support from fellow prisoner Basie (John Malkovich), but mainly shows his own unaided adaptability and spirit as he navigates this separation from his parents. Only 13 at the time, Bale’s fine acting chops are already on full display and the backdrop of war-torn Shanghai is picturesque and powerful.

5. Under the Tuscan Sun (2003)
Diane Lane is an endlessly enchanting actress and Under the Tuscan Sun is a likable confection with colorful characters, a lightweight love story, and lyrical views of Tuscany. As beautiful author Frances Mayes, Lane makes her way to Italy in search of a re-set button after her husband leaves her for a younger, pregnant woman. Restoring some dilapidated digs with the help of her vibrant neighbors, Mayes also weathers a (literal) storm and restores happiness to one divided family. Relaxed escapism? Sure, but Lane received a Golden Globe Award for this performance, too.

6. Eternal Sunshine of the Spotless Mind (2004)
Quirky romcom meets sci-fi mind-bender when both members of a broken-up couple patronize a sketchy company that completely erases memories from their brains. Kate Winslet and Jim Carrey are adorable as the estranged couple as Winslet kicks into her wild, free-spirited soul mode and Carrey tamps down his usual schtick for something more genuine. Told in a deliciously twisty, convoluted way, Eternal Sunshine of the Spotless Mind is an amusingly touching affair with an edge, a wink, and a heartfelt sob.

PS. Before summer ends, you may also want to check out the movies in our post Five Films: Surf Films Are in Season.

0 comments on “A Nod to the Solar Eclipse: 6 Movies With Sun in the Title”