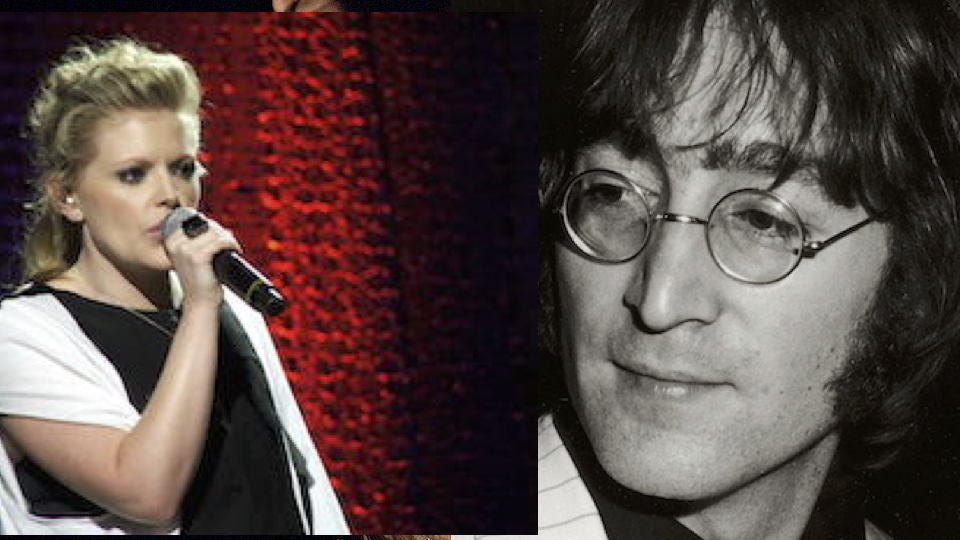 It’s been said that those born under the sign of Libra  (September 23 – October 22) are seekers of security and harmony.  Then there are Libras like John Lennon (October 9th) and the Dixie Chicks’ Natalie Maines (October 14th) who required extra security because of comments they made that struck their fans as inharmonious—and insulting.

In 1966, the after-effect of John proclaiming that the Beatles were “more popular than Jesus” was that the group stopped being a live band and retreated to the less-crazy atmosphere of the studio.  In the Dixie Chicks’ case, their career took an immediate nosedive in 2003.  Right before the Iraq was about to commence, Natalie uttered onstage at a London concert, “I’m ashamed the President of the United States is from Texas.  We do not want this war, this violence.”

And for some fans of each band, they did not want to hear or see their once favorite groups anymore.

The seed of the Beatles’ controversy can be found in an interview John gave to London Evening Standard’s Maureen Cleve. He cited her as his inspiration for “Norwegian Wood,”  a song that hinted at one of John’s many affairs.

Lennon let loose: “Christianity will go.  It will vanish and shrink.  I needn’t argue about that.  I’m right and I will be proved right.  We’re more popular than Jesus now.  I don’t know which will go first–rock ‘n’ roll or Christianity.  Jesus was all right but his disciples were thick and ordinary.  It’s them twisting it that ruins it for me.”

However, in the same interview, Paul told Cleve that America is “a lousy country where anyone black is a dirty n—-r. ”  And Ringo not only compared the Beatles to “Siamese quads eating out of the same bowl,” but said about his wife Maureen (whom he met when he was 22 and she was sixteen), “I own her, of course.”

Nevertheless, two DJs in Birmingham, Alabama, Doug Layton, and Tommy Charles, latched onto Lennon’s “more popular than Jesus” out-of-context quote that appeared in the teen magazine Datebook and kick-started a cancel campaign against the Beatles.

George Harrison recalled: “The repercussions were big, especially in the Bible Belt.  In the South, they were having a field day.”

Indeed, some fields became filled with Beatle records and paraphernalia which were used as bonfire fodder such as the one organized in Longview, Texas by KLUE radio.  No word if John heard that the station’s transmission tower was zapped by lightning the next day, ruining broadcasting equipment and knocking out the news director.

A Kentucky-based radio station, WAKY, decided they’d punish the Beatles by playing ten seconds of silence each hour for prayer in lieu of their music.

The bonfires and controversy gradually died down after John offered a weak apology.  The two Alabama DJs stopped imploring listeners to send Beatles records to the station to be pulverized with a tree-grinding machine.

Boycotts change with the times as the Dixie Chicks discovered from their own career-shattering moment.  Instead of a 20th-century tree grinder, a CD-crushing, 21st-century bulldozer was used for fans to voice their disapproval of Natalie’s Iraqi war comments.  In the space of two weeks, their single “Landslide” went from #10 on the Billboard charts to sliding off of the charts.

Radio stations that dared to play a Chicks song were bombarded with angry emails and phone calls.  Their career took such a hurt that not even the Red Cross could  help the band; the organization turned down a million-dollar endorsement from the suddenly flailing “Chicks.”

John Lennon would have knowingly nodded his head had he heard Natalie on her 2020 appearance on the Ellen DeGeneres Show: “I think we were one of the first people to experience that cancel culture, and I think what I said back then would not even be a thing today because it was really mild compared to what people say today.  On one hand, everyone has this platform where they can say whatever they want to say, but on the other hand, this platform can move really quickly and, yeah, ruin people’s lives.”

After 2003, the three musicians took stock of their lives and their growing families, releasing Taking the Long Way (which won the 2007 Grammy Awards for Album of the Year) and 2020’s slyly named LP Gaslighter.

But now in these anything-goes times, it appears that the days of mass boycotting a group or musician are over.  Not one eye is batted when Kanye West named an album and clothing line Yeezus but perhaps he was forgiven for naming a LP Jesus is King.

But as late as 1978, record companies sometimes were wary of rockers mentioning Jesus in a way that some could take as pointed criticism.  In England, Nick Lowe named his stellar 1978 debut album Jesus of Cool, only for Columbia Records to sell it in the States as Pure Pop for Now People.

It begs the question: Could Nick’s ex-father-in-law, Johnny Cash, have still recorded Depeche Mode’s “Personal Jesus” while he was signed to Columbia Records?