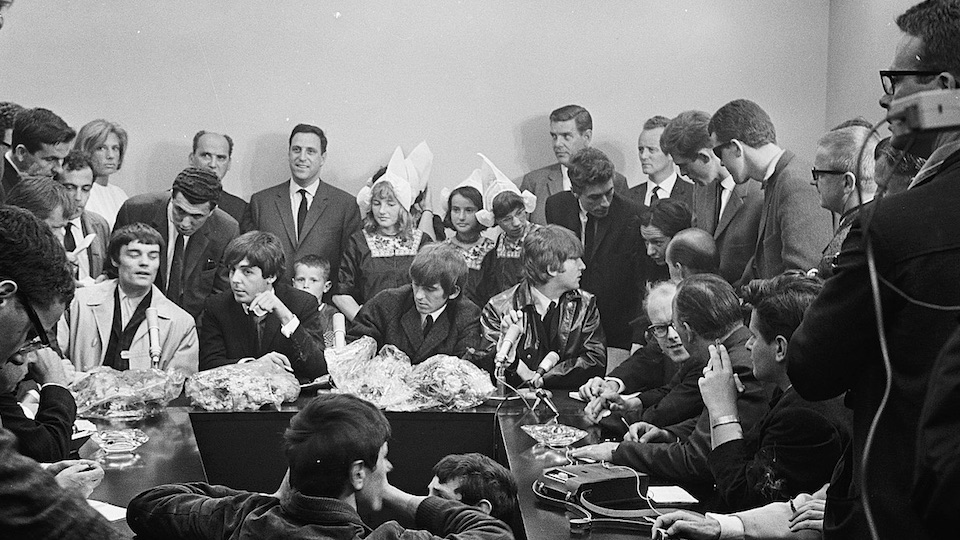 It wasn’t enough that Jim Berkenstadt, the Rock and Roll Detective®, had a best-selling book on The Beatles. No, like the boys themselves, he wanted more…the “toppermost of the poppermost,” as John Lennon once put it. So recently, Berkenstadt secured a movie contract for his extremely popular book on the lads and Jimmie Nicol, The Beatle Who Vanished. Currently in the works, this film will be the blockbuster YOU heard about here first! Enjoy the scoop in this insider’s interview.

Jude Southerland Kessler: Jim…or should I say Mr. Rock and Roll Detective®…thanks for taking time out from your hectic writing and film schedule to be with CultureSonar readers today. You know I’m a huge fan of your work, and I’m thrilled to be able to chat with you and let others know about your upcoming projects.

Berkenstadt: Thanks, Jude. It’s an honor to be speaking with John Lennon’s preeminent biographer. I always enjoy our chats. I can’t wait for your incisive questions.

Kessler: Well, Jim, thanks to your extremely thorough scholarship and detective work, Beatles fans who read The Beatle Who Vanished, now “know all” about Jimmie Nicol, the talented drummer who substituted for Ringo during the first 13 days of the 1964 World Tour. For those who haven’t yet read the book, give us a glimpse of why Nicol was called upon to “sit in” for Starr…and why Jimmie was chosen.

Berkenstadt: Back in the middle Sixties, a World Tour was completely unheard of in the pop music world. The legal and insurance industries had yet to anticipate issues related to tour cancellations. Beatles’ manager Brian Epstein had spent a year corresponding with promoters to arrange deals for multiple concerts across the globe. It was all done via mail correspondence. All the merchandise was on the shelves; new Beatles 45 RPM singles were ready for release in each country of the tour. Scores of plane flights, hotels, equipment rentals, and warm-up bands were set to go in each city. There were no “out” clauses in legal concert agreements. If The Beatles had canceled their World Tour, due to Ringo’s sudden illness, they would have been sued by promoters worldwide who had already pre-sold tickets for hundreds of thousands of dollars. They would have likely lost thousands more in canceled hotel and airplane bookings. Most significantly, their reputation would have been ruined, before they’d even had a chance to conquer the world as the greatest pop band ever! Thus the phrase, “The show must go on.”

Jimmie Nicol was not the first drummer asked to sub in for Ringo. And he wasn’t even the second! I will leave the details of that frantic search (with less than 24-hours until the tour) to readers of the book. However, Bobby Graham, a session drummer, suggested Nicol to Beatles manager Epstein. Brian Epstein had been to a Decca session a few months earlier and had seen Jimmie Nicol’s professionalism in the studio. Epstein called George Martin and asked him to call Jimmie. Why Jimmie was chosen was more luck than anything. However, what The Beatles, Epstein, and Martin did not realize, was how lucky they were to choose Jimmie. As readers will discover, Nicol already knew Ringo Starr’s drum parts for all of the songs in The Beatles’ concert set. He was ready to go on tour. How? It’s all detailed in the book!

Kessler: Jimmie and John Lennon really struck up a great friendship during the time that Jimmie traveled with The Beatles. In fact, John made sure that Jimmie could “find” the beat on stage each night. Tell us a little about their time together.

Berkenstadt: I believe that John was fascinated with the idea of a temporary drummer joining the band that he had formed, albeit for a brief time. He took the time to get to know Jimmie on all of the flights from Amsterdam to Denmark, back to London, on to Hong Kong, Sydney, Adelaide, and Melbourne. From the very first live concert they performed in Denmark, you can see footage of John (the rhythm player) turning his back to the audience to show Jimmie the beat with his strumming. It was Lennon who also gave Jimmie the hand-written setlist each night. I think that the real epiphany for John Lennon, which increased his respect for Jimmie and engaged them in conversation, was finding out that Nicol had been a part of the first wave of British rock, including many of Lennon’s favorite artists. On the flight over to Hong Kong, The Beatles were surprised to find that Tony Sheridan, their Hamburg friend and mentor, was on the flight as well. When they brought him forward to First Class, Lennon was equally surprised that Sheridan had engaged Jimmie Nicol as the drummer in one of his old London bands in the early Sixties. I think these facts led John to engage more with Jimmie. Lennon was also impressed with Nicol’s drumming on tour. However, the enthusiasm and encouragement may also have given Jimmie the false impression that he might have a chance to permanently replace Ringo Starr. But, alas, that was not in the cards.

Kessler: So, despite remarkable days with The Beatles in The Netherlands, Hong Kong, and Australia, Ringo did return to the tour to relieve Jimmie and to resume his rightful place in the band. What happened to Jimmie Nicol at that point, Jim?

Berkenstadt: When Ringo returned to the band, it was like the group of “brothers” quickly closed ranks, and Jimmie felt like he was now on the outside looking in. Jimmie promptly realized that his dreams of joining the band were crushed.

Nicol returned to London highly confident. He had a record deal to record and release songs under his group Jimmy Nicol and the Shubdubs. (Note: Nicol spelled his name “Jimmie.” However, record labels and the media incorrectly spelled it “Jimmy.”) He paid his session buddies to join his band on tour. Their first gig was an extended top-of-the-bill show series replacing the Dave Clark Five, as Dave had also gone into the hospital. In 1965, he formed another band called, The Sound of Jimmy Nicol. By the middle of 1965, however, Nicol had no label deal, was bankrupt, unemployed, and getting a divorce. It was at this point that he vanished… but not for the last time.

Kessler: And unfortunately, Jimmie’s relationship with Brian Epstein didn’t end happily either, did it?

Berkenstadt: No, it did not. However, Nicol was not blameless. During his last Beatles’ press conference with five “Beatles” (as Ringo had come back to Melbourne), Nicol started taking side conversations with journalists, detailing what he planned to do after leaving The Beatles. Unfortunately, with a live microphone, Jimmie’s talking was interrupting the comments of the other Beatles. This caused Derek Taylor and Brian Epstein to get very upset.

After the presser, Epstein ripped into Nicol and told him to pack his bag for the flight home the next day. Nicol had wanted to fly to Sydney first and jam with Frances Faye, a singer on Capitol Records in America. Epstein forbid this and said, “You have a one-way ticket back to London.” Nicol rebelled that night and went out to a bar, where Epstein’s staff had to go retrieve him.

Jimmie didn’t like being treated like a child. He was older than The Beatles and was not used to Epstein’s strict treatment. He felt it was disrespectful after all he had endured by sitting in to “save” the group. Nicol’s anger with Epstein continued after his return to London. Nicol alleged that his solo career fizzled because he believed Epstein had blacklisted him. Their relationship and further information on this issue is all detailed in the book.

Kessler: Well, as great as the book, The Beatle Who Vanished, is (and it is excellent!!!), they say a picture is worth a thousand words, and we’re getting ready to be treated to “the picture” because your book is currently being made into a film. Give us the inside scoop on that exciting event!

Berkenstadt: Yes! The Beatle Who Vanished is currently in development with Ecosse Films in England. The film option rights were purchased by Alex Orbison (son of Roy Orbison, aka Lefty Wilbury) and Ashley Hamilton (son of George Hamilton and the ex-step-son of Rod Stewart). Many Beatles fans may remember that this studio produced a John Lennon film called, Nowhere Boy. Ecosse specializes in UK historical bio pictures. I am serving as a Co-Executive Producer and script consultant. Currently, the story is being outlined, and a script is being written. When completed, the film will be released worldwide and will also appear on one of the streaming services.

Kessler: Now, we know that the Rock and Roll Detective® isn’t resting on his laurels as the movie is being made. We know you have a brand-new book on rock’n’roll mysteries in the works. Could you share a couple of those mysteries…including the name of the new work and a possible release date?

Berkenstadt: Absolutely, no resting! My new book is titled, Mysteries in the Music: Case Closed.

Mysteries in the Music: Case Closed examines the secrets, myths, legends, hoaxes, and wildly inexplicable events that are such an intriguing part of rock and roll history. As the Rock And Roll Detective®, I have spent decades researching the mysteries hidden within the music and the people who made the music. This anthology of popular music’s most intriguing stories investigates original evidence and primary source materials in order to challenge some of rock’s most enduring legends. In many cases, original stories were hastily prepared or even fabricated by the media; and just as often these legends became frozen in time, mired in hasty or flawed conclusions. This book solves the mysteries once and for all.

After many decades, the back-stories of pop and rock music lore are finally unearthed, and the truth is revealed. If classic rock was the soundtrack of your youth, or if you wish you had lived through these moments in time, or if you are just plain curious about rumored events you have heard about over the years…then this book is for you! “Let me take you down, ‘cause we’re going to”… Mysteries in the Music: Case Closed.

Once this pandemic subsides, I will be shopping the book to traditional publishers and to studios, to create a TV docu-series. My producing partner in the TV show is Paul Barrosse (VH1 Behind the Music & SNL).

Kessler: Jim, so that our readers can keep up with the release of the film and the new book as well, how can they follow you on social media?

Berkenstadt: Thanks, Jude, for the opportunity to touch base with the CultureSonar readers. I myself read the stories at CultureSonar each week! So, I am honored to be interviewed here.

Here are some of the places I can be found and contacted:

Readers who want to be placed on my email newsletter can just send me an email with their full name, and I will add them to the list.

Well, a huge CultureSonar round of applause for the tireless and meticulous Jim Berkenstadt! Thanks for taking time out from your research to chat with us today, and congrats to you on the film, your new book, and your best-seller status. As my father used to say, “keep on keepin’ on.” Shine on, Jim!

2 comments on “The Beatle Who Vanished…Then Reappeared”