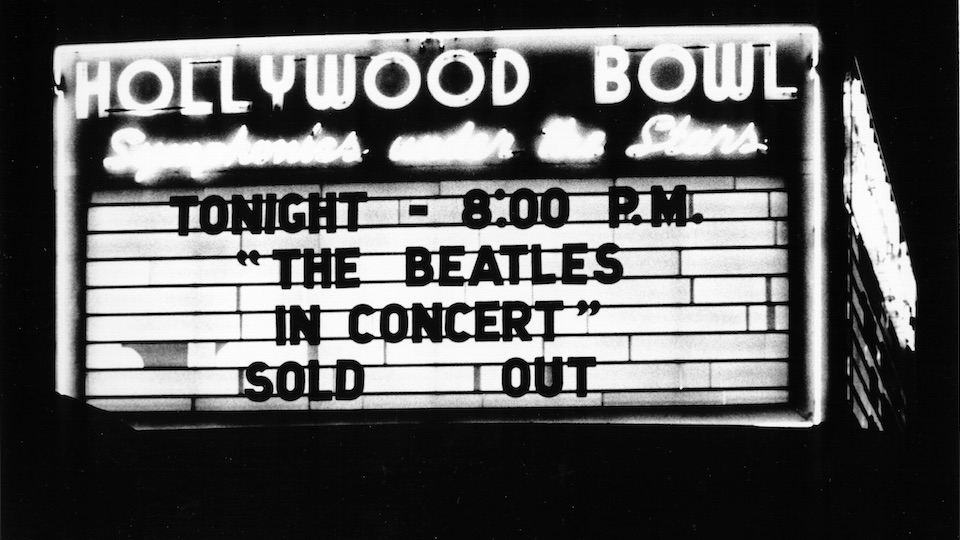 To say I love this record would be an understatement but I’ll say it: I love this record! I Love This Record!! I LOVE THIS RECORD!!! I was 12-years-old when The Beatles at the Hollywood Bowl was released in 1977. I found it accidentally on a Saturday afternoon while wandering around on Junction Boulevard in Corona, Queens, specifically at some weird little record store specializing in Latin music. It was only six bucks, which wasn’t as cheap then as it sounds now, but it totally shook my world. As investments go, it was a brilliant one.

Back then, I knew almost nothing about who or what The Beatles were but after listening to this record I found out real quick what all the fuss was about. Based on their live concert banter alone, they struck me as the four coolest, funniest guys that ever lived and boy, did they rock. Even listening to the album again two days ago, I still wondered how Ringo’s drum kit didn’t completely fall apart during the fierce beating he gave it during the opening number (“Twist and Shout”). That ferocity though is part of what’s so great about this album and why it’s my personal fave. It’s the level of energy being put out both onstage by The Fab Four and out in the audience by 17,000 crazed kids who would not — or more correctly, could not — stop screaming and shouting at maximum volume for even one single second as evidenced from the moment you put the needle on the record and the announcer comes forth with the greatest words in the English language: “And now here they are: The Beatles!”

Related: “We All Live In A Yellow Submarine”

That excitement continues right up to the end of Side A (“Roll Over Beethoven”) and after the final notes of Side B (“Long Tall Sally”). Even just thinking about it, I can feel my heartbeat and my breathing change. The whole record is really a non-stop adrenaline rush. Right before that last number, Paul informs everyone that this next song is going to have to be the last number and the kids can’t take it. They are pushed even further over the top as they scream even louder because clearly, clearly, they never want it to end, the same way as I never wanted it to end as I lay there on my grandmother’s couch listening to it hundreds and hundreds of times (which was pretty easy to do seeing as the whole record is only 29 minutes long).

Though separated by over a decade from the actual concert on vinyl (which were recorded in 1964 and 1965), I was one of those 17,000 kids, and for one brief half-hour, it didn’t matter if the world were flat or round because it was perfect and safe and fun. It was the way life was supposed to be. The Beatles were precisely what Timothy Leary had proclaimed them to be: mutants or prototypes of evolutionary agents sent by God and endowed with a mysterious power to create a new human species — a young race of laughing freemen. After hearing The Beatles at the Hollywood Bowl, I wanted to be part of that evolution, that revolution. They were my instant heroes from that point forward. It was because of this record, which went to Number One in several countries and sold at platinum-levels in the U.S., that I had to hear Sgt. Pepper’s Lonely Hearts Club Band and The White Album and Let it Be. It was why  I had to see movies like Yellow Submarine and Help! and A Hard Day’s Night,  and that I had to read everything ever written about John and Paul and George and Ringo, and why to this day I still can’t walk past The Dakota or through Strawberry Fields in Central Park and not feel the pain of John Lennon’s death. The Beatles at the Hollywood Bowl was my introduction to a guy who seemed so cool and so funny — like the greatest pal you could ever imagine.

A compilation of three concerts (one in August 1964; two in August 1965), this album features a nice mix of hits (“She Loves You,” “All My Loving,” and “Can’t Buy Me Love” among them) — all  meticulously produced and engineered by George Martin and Geoff Emerick into one incredibly perfect performance which now serves as a triumphant document of a time in history forever known as “Beatlemania.” For some of us, that’s an era as important as the Industrial Revolution or the Ming Dynasty.

Photo Credit: Marquee of the Hollywood Bowl when the rock and roll band ‘The Beatles’ performed there on August 23, 1964, in Los Angeles, California. (Photo by Michael Ochs Archives/Getty Images)