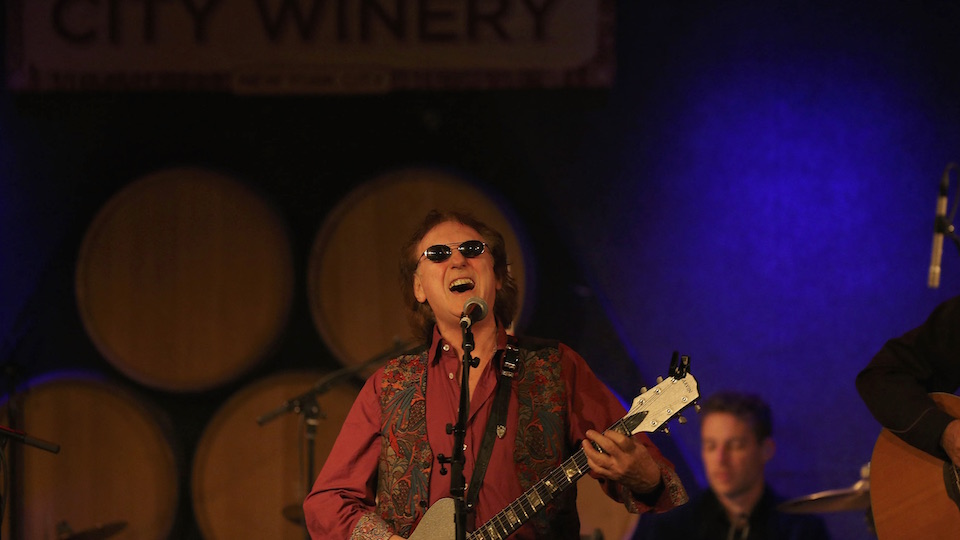 Every Moody Blues fan knows who Denny Laine is but his career extends way beyond the Birmingham-born musician’s U.K. hit with the band, “Go Now,” circa 1964. Following his departure from The Moody Blues, Laine worked with The Move’s Trevor Burton on The Electric String Band, Balls, and Ginger Baker’s Airforce. In 1971, he accepted an invitation from Paul McCartney to join Wings as a guitarist. (He not only played on every Wings album but co-wrote “No Words”, “London Town” and “Mull of Kintyre” with the former Beatle). Somehow, he also managed to simultaneously release a series of solo albums (Ahhh…Laine, Holly Days and Japanese Tears) so it’s no surprise that his solo career is still active today. So what else is going on?

Congratulations on your Rock and Roll Hall of Fame induction. How do you feel your contribution added to The Moody Blues growing legacy?

A: That was fantastic. You have to understand in England we don’t have the Rock and Roll Hall of Fame. We see it as an American thing. But it was good fun. You meet a lot of people. Graeme Edge said that we don’t do it for the awards, but… I went because I’m incredibly proud of how the band continued. Justin was a great writer-singer, part of the style, Ray and I brought the harmonica and flute sound. We started very R&B… I do the Band on the Run and Moody Blues shows back to back at the moment. Days of Future Passed continued the band after me, and I’m very proud of the fact that I left on a good note. It wasn’t that successful, the album I did, and now it’s a bit of a cult album [but] “Go Now” was a hit and it was like the beginning of my musical career.

Related: “John Lodge of the Moody Blues on ‘Days of Future Passed'”

Q: You worked with the idiosyncratic The Electric String Band. How did that come about?

A: I’d been doing my own thing as a writer, I was influenced by songwriters like Tim Hardin, [and] Paul Simon. Donovan — who did liner notes for The Moodies — called us a progressive blues band. There were elements of that. So, I went with that direction. I wrote the song “Say You Don’t Mind” which Colin Blunstone turned into a hit later. John Paul Jones, who was doing a lot of session work, wrote out the string part. He played a bit of bass on it. That was what started the String Band. By the end of the year, I played at a Jimi Hendrix gig in London. That was where Paul and John and Peter Asher saw me. They went to the gig. Paul McCartney invited me into Wings because of that gig. We were doing the symphonic stuff, using strings. This was before ELO. The Moodies started doing stuff like that with Justin.

Q: Before joining Paul McCartney’s Wings, you worked with Ginger Baker’s Airforce. How was it working with a musician of his prowess and temperament?

A: On The Moody Blues first tour, Graham Bond had Ginger Baker and Jack Bruce playing with him. That’s where I got to know Ginger. I was hanging out with Trevor Burton — we were in Balls — and Ginger was playing Blind Faith. I already knew Steve Winwood, you see, so I got to know Blind Faith. Then Ginger wanted to put a big band together and told me of his plan. I knew some people. Alan White was the drummer for Balls, Trevor Burton from The Move, and I knew Jim Capaldi. Ginger went off the rails a bit, he had health issues, so I only did the one album in the end. A lot of people say he’s a maniac, but I like him. He’s an honest guy. I’m still in touch with him to this day.

Q: Red Rose Speedway was initially proposed as a double album. Recordings included the wonderfully kitsch and bombastic “Live and Let Die.” What did you think of the songs that were not used?

A: I don’t know what I think. That wasn’t really my decision. There was a bit of a fallout with Glyn Johns so I think some of the songs were unfinished. Paul used to produce everything beforehand and had a fight with Glyn. I got the new package the other day, haven’t listened to it yet, but it turns out one of my songs “I Would Only Smile” is on the new release but I don’t know what other songs are there. [I] loved Henry McCullouch’s guitar playing, I put him in the band. He was in the Joe Cocker Band. I knew him from living in Mayfair so I suggested him. Denny Seiwell was the drummer of the time and Steve Holley was a mate of mine, so he later played in Wings. Kenney Jones might have been involved in some of the later auditions. You probably know the story better than I do. He joined The Who, so he did very well for himself. [Laughs]

Q: You co-wrote five of the songs on the excellent London Town album, including the title track. Where were the areas you and McCartney developed in one another?

A: I knew Paul from the Moody Blues, We did their second tour. He was always a friend. I would knock around with Paul in London… Writing with him wasn’t a chore. Nothing negative. He’d come up with an idea and so would I. I wasn’t as prolific, but that’s beside the point. I wasn’t thinking at the time. I had bits. But he was always encouraging me to put bits together, so we did. And that became “No Words,” my song on the Band On The Run album. By London Town, things were different. We sat down and played. “Deliver Your Children” was one of mine. I lived in Spain for a while, took some flamenco guitar from there, so that gave it a bit of a different feel. Very me that song and people like it. Paul and I were very into folk music… I was into bluegrass… I like Django Reinhardt. “Mull of Kintyre” came about [when] we were in Scotland. I went round to Paul’s one day and he had the chorus. That’s the song, I think. The chorus. We were inspired by Scotland, so I helped with the lyrics. The Campbeltown Pipe Band made it the song it is. Billy Connolly liked it, a nice endorsement, otherwise he would have slagged us off onstage. [Laughs] We would never have wanted a Scottish song that they didn’t like. And a lot of that is from the pipe band [which] transposed keys [and] added to the arrangement… The pipe band was recorded outdoors with the echo. Magical. Where we were, you could see where Scotland ends and Ireland begins.

Q: Your Japanese Tears album expresses muscular vitality and vulnerability. Did it represent where you stood as both an artist and a musician in 1980?

A: Obviously, it was expired with Paul’s bust in Japan. We were getting the experience from the fans who didn’t get to see the tour. The upset. They weren’t angry but upset. They couldn’t get to see the band. I just wrote that as a single song and then it turned into an album. It was the start of me being in the studio of myself, start of a whole new era. It wasn’t my first album, I had Ahh… Laine. But it was me starting a new era. Again, we had to come to do the strings as overdubs. Steve Holley would play things, but I played most of the things myself… Paul and Linda weren’t on the album. Maybe they were on the songs I did with Wings. “Send Me The Heart” I recorded with Paul in Nashville. “Weep for Love” was another song. These were tracks that I can’t remember if they were on this one or another one. These were songs I had from Wings which weren’t used but I had permission to use them which is neither here nor there. But the album started off as a song from the feeling from the fans and turned into an album.

Q: Would you care to tell Culture Sonar about any upcoming projects?

A: I’ve had a musical [Arctic Song] lying around for twenty years so… It’s an environmental piece. Only done it twice. We performed it in a University near Buffalo. Hoping to work more on that. Working with Wings members Denny Seiwell and Laurence Juber on a Wings review, which Paul McCartney is very happy for us to do might I add. It wouldn’t be a tribute band. It would be our own thing… I don’t like living in the past and I like to have new material and songs. I have an album that hasn’t been released yet that’s in the pipeline — contractual reasons and all that slowing it down. And I have a Denny Laine Official Page, so you can check with me there.

Photo Credit: Denny Laine performs the ‘Band On The Run’ album in its entirety and other songs at City Winery on January 28, 2017 in New York City. (Photo by Al Pereira/Getty Images)

7 comments on “The Moody Blues’ Denny Laine Still Has Wings”