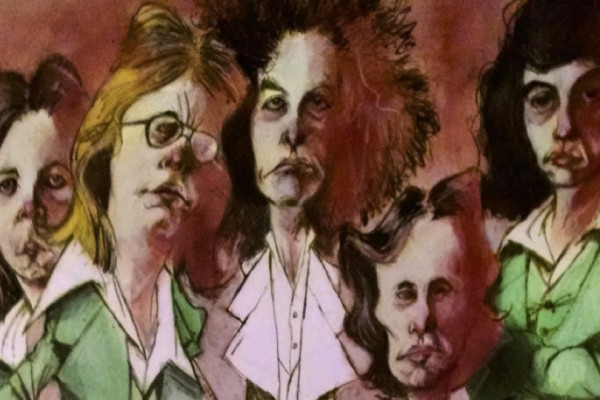 Growing up in Baltimore in the ’70s, I would tune in to WKTK or 98 Rock to hear my favorite performers. Bowie. Queen. Elton. Zeppelin. And Crack The Sky. When I left Maryland, I found my college buddies loved all the same music with one glaring exception — no one had heard of Crack The Sky. The story of Crack the Sky is one of potential success frustrated by missed opportunities. The band, founded by guitarist and songwriter John Palumbo, came together in the early 1970s in a small town in West Virginia, about 30 miles west of Pittsburgh. Palumbo had formed a cover band with guitarist Rick Witkowski after the two met at a local music store. Witkowski was amazed by Palumbo’s prolific songwriting (according to Witkowski, Palumbo had “notebooks full of songs”), and they soon decided to start performing Palumbo’s original compositions. By 1975, the band was a five-piece, and they released their first album.

Crack the Sky’s debut album, Crack The Sky, was magnificent. Their music was like a mixture of Steely Dan, Yes, and the Beatles. David Sanborn and the Brecker brothers added a jazz flavor to some of Palumbo’s songs. A string section turned “Ice” into a worthy successor to the Beatles’ “I Am The Walrus.” Crack’s lyrics ranged from sci-fi epics to twisted love songs to social commentary. Rolling Stone named Crack The Sky the “debut album of the year.” Even today, the magazine ranks it as one of the top fifty prog rock albums of all time.

So then, why has no one heard of Crack the Sky? The trouble began with Lifesong Records, the newly-formed record label that signed Crack the Sky and released their first album. The founders of Lifesong had no clue about how to promote and distribute an album. Despite the raves from critics, Crack the Sky’s album could not be found in record stores and received only limited airplay. To make matters worse, the band had signed a typically one-sided record contract that allowed Lifesong to keep all revenue until the label’s costs were paid off. The band didn’t receive a dime. (Witkowski claims he received a single royalty check of $2.43. He never cashed it.)

There was one place where Lifesong’s limited marketing effort paid off — Baltimore.   There was some airplay in Pittsburgh, Philadelphia, Atlanta, and a few other cities across the U.S. But only in Baltimore was the album played in constant rotation. Baltimoreans knew every word to “Ice” and “She’s A Dancer” — and they could play air guitar to “Hold On” and “Surf City.”

Crack The Sky tried to build an audience through live performances, which showcased the band’s high caliber musicianship. They opened for ELO, Kansas, Styx, Supertramp, and others, but these stints proved to be only temporary. (Palumbo claimed that they were kicked off tours for showing up the headliners.)   Still, they filled venues in Baltimore with enthusiastic audiences who sang along with every song.

Crack The Sky’s problems would continue despite releasing the highly praised albums Animal Notes (1976) and Safety In Numbers. (1978). The band members argued about their direction among themselves and with the record company. Friction between Palumbo and Witkowski increased as did their perilous financial situation. Finally, Palumbo quit the band to pursue a solo career.

In 1980, the label convinced Palumbo to reform Crack The Sky. Palumbo brought his demos to Witkowski and keyboardist Vince DePaul. The three-piece band’s resulting album, White Music, incorporated elements of new wave and punk and was more pop-oriented than their previous releases. Every song was a potential single, and every track was played on the radio — but only in Baltimore.

Crack the Sky has continued to release albums in different combinations, often with Palumbo as the only common thread. Their recent releases (including 2015’s The Beauty of Nothing) have reclaimed some of the feel of their earlier recordings, receiving great reviews from the few critics who have heard the recordings. And you can still see the band’s great live show with a sold out audience — but only in Baltimore!

The epic that started it all. A structurally complex musical journey made for headphones. Crack’s signature syncopated bass and drums. A great Palumbo vocal delivering a mysterious lyric (“are you afraid of the ice?). Dramatic strings (like Paul Buckmaster’s early work with Elton John) are the icing on the cake.

The story of a dancer. But, since this is a Crack the Sky song, the “she” is really a “he.”

“We don’t want your money – We want MINE!” Let’s just say that Lifesong was not amused! A favorite on Sirius/XM’s Deep Tracks channel.

The first five notes of the intro are perfect Crack.  It starts and stops, drawing you right into the song.  One of a handful of songs not written by Palumbo after he left the band during the recording of Safety In Numbers.

Another epic song in multiple sections. “Something’s wrong from the moon.” Nuclear war as contemplated by Palumbo.

Crack’s biggest hit, even though Palumbo thought it was a throwaway. Listen as the lush intro disappears, revealing Palumbo’s raw vocal sang to the woman who spurned him. And then the band kicks in. Should have been a hit outside Baltimore.

Tell me this is not a hit single! An unusually “normal” pop song for the band with some nice Crack touches (including Beatlesque harmonies in a slowed-down outro).

Palumbo’s ode to excess. The funky horn section (especially in the instrumental break) made this song a highlight of their live shows.

Crack the Sky updates their sound without losing their unique style. A horn-filled highlight from their 2012 release, Ostrich.

While we’re at it, you might enjoy other CultureSonar articles about great musicians: These Guys Were REALLY Behind the Music profiles some of the greatest-ever studio players; When a Beatle Wrote with Elvis should be relatively self-explanatory; as are Why Doesn’t Anyone Record Squeeze’s Songs? and That’s My Jam. If you’re looking for an awesome new band, check out our piece on Lake Street Dive.