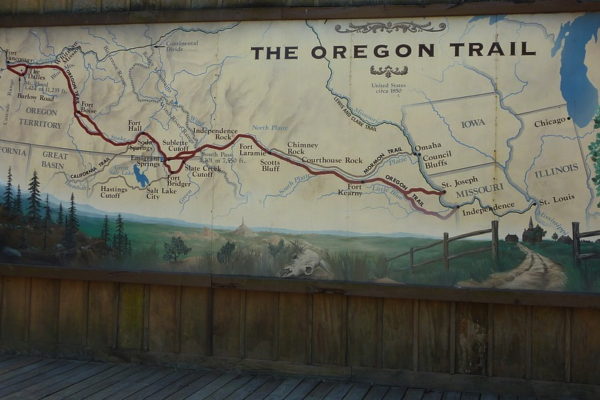 A chance encounter with a historical marker identifying a Pony Express depot in Kansas inspired what author Rinker Buck characterized as a “crazyass” idea: buy some mules, hitch up a covered wagon, and traverse 2,100 rough miles of the original Oregon Trail from Missouri to the Pacific Northwest. A crazyass idea for sure – but also one that drove more than 600,000 traders, trappers, immigrants, thieves, scam artists, cowboys, drunks and religious zealots to do the same from 1840 to 1880. For more than four months in 2011, Buck and brother Nick journeyed through farmland, deserts, desolate hill country and steep mountain passes following the still-evident ruts of 19th-century wagon trains, the first men in more than 100 years to complete an authentic covered wagon trek from the junction country of northeastern Kansas to the Willamette Valley.

Much more than a picaresque travelogue, The Oregon Trail immerses the reader in the physical, mental and spiritual character that propelled America westward on foot in the 1840s before the advent of coast-to-coast railroads. Character that is clearly evident as much in the modern-day cowboys, farmers and Saints met along the Trail as it was in the diaries and missives of mid-19th century pioneers struggling to a new life in the west.

Covering 25 miles per day in a wagon pulled by three mules provides the author with plenty of time to find joy and beauty in the essential details of animal husbandry as much as in majestic landscapes of desert and mountain. The reader becomes unexpectedly fascinated with the personalities of individual mules, the mechanics of braking a 6,000 pound covered wagon on a steep downhill slide and the ingenuity of master-of-all trades Nick as he copes with broken wheels, broken axles and the natural disasters that regularly threaten the trip.

Sixty years old when he made the trip, The Oregon Trail is hardly Buck’s coming-of-age effort. It’s more accurately thought of as his “coming-to-terms” exploration of an uncertain relationship with his father, the successful but complicated man whose spirit infused the Oregon trip. This psychological resolution is eloquently captured in a late-book passage:

The pleasant night sounds of our wagon camps in Idaho… made me feel dreamy, contemplative, more willing to accept my motivations for making this trip. I was reminded of the same kind of overnight stops I had made as a boy with my father. In the orange embers of our charcoal grill I could see the flames of my father’s fires at Valley Forge or along the Delaware Canal. That was a half century ago, thousands of miles away, but the joyful vagabonding I had shared with him that summer felt here, now, joined, shared across elastic time…. Night after night in camp, when the sun fell as an orange disc against the distant Sawtooths, I was filled with acceptance, a soothing accommodation with aging and the passage of time.

The reader inevitably gets caught up in the trip’s challenges and triumphs, great and small. A quick 300 pages later, we’ve learned a lot about pioneer courage, drive and gumption – and perhaps a whole lot more about facing life full-on and the importance of creating a little discomfort in our quotidian lives.

PS. While we’re on the subject of good reads, check out Back From The Dead And Onto Bookshelves Everywhere, A Time of REALLY Big Projects, and Would You Give This Guy a Ride? for other books worth your while.

0 comments on “The Oregon Trail: Much More Than a Picturesque Travelogue”