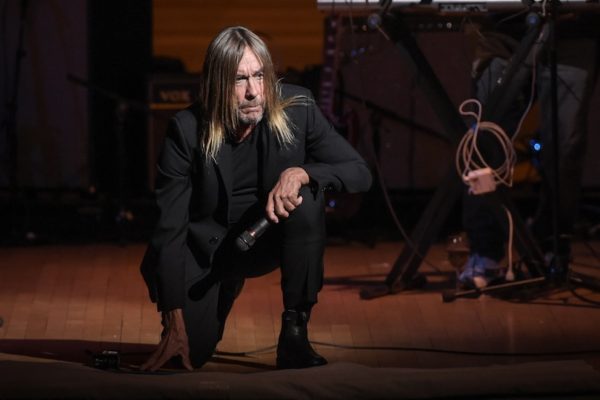 He invented the stage dive. He rolled around — bare-chested — on broken glass. He routinely ended his shows bloodied and bruised. This, ladies and gentleman, is how Iggy Pop rolls. And now the godfather of punk is back, with a surprising collaboration. Iggy is set to release a new album, Post Pop Depression, on March 18, with a U.S. & European tour to follow. The record, recorded in secret, is a labor of love between Iggy and Josh Homme from Queens of the Stone Age. Homme was born the same year The Stooges released their cult album, Raw Power (1973), and wanted to recapture some of the vibe that followed when Iggy went to Berlin to shake heroin. Collaborating with his close friend, David Bowie, that’s where the iconic 1977 album, Lust for Life, was created. Post Pop Depression recalls that style, but with a distinctly stripped-down garage band edge provided by Homme, his “Queens” band-mate Dean Fertita on guitar and keyboards and drummer Matt Helders from the Arctic Monkeys.

At 68, Iggy is taking a look back at life and his place in culture. Homme, who also plays with the Eagles of Death Metal, found working on the album helpful in dealing with the aftermath of the November 2015 terrorist attack at the Bataclan in Paris (he skipped that gig, but his band-mates were targets of the terrorists – luckily, they survived). The sound — and the lyrics — on Post Pop Depression are introspective, yet retain a muscular quality (courtesy of Iggy’s distinctive deep growl). You can check out two songs ahead of the official release date, “Break Into Your Heart” (go to iggypop.com) and “Gardenia,” which he just performed on The Late Show with Stephen Colbert (see below). He may not roll around on shards of glass, but Iggy is still willing to cut deep and share it with the world.

PS. While we’re on the subject of new albums, you might be interested in What Would Bowie Do? and David Bowie: Sometimes Three Years Are Better Than Five which look at David Bowie’s final work, Blackstar. And if you want a look at another badass, check out our post Chrissie vs. Miley.