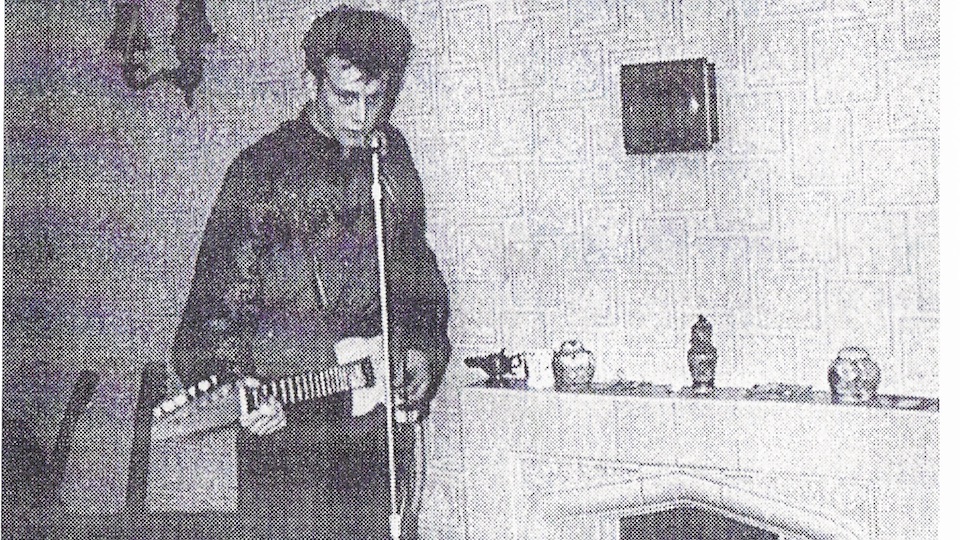 We are all captivated by pivotal moments in history from whence things are never quite the same again: the defeat of the Spanish Armada, Neil Armstrong’s moon walk, the invention of the internet. For rock’n’roll historians, no moment in the early Sixties “age of innocence” was more world-changing than 27 December 1960: the birth of Beatlemania! Recently, Lanea Stagg of the Recipe Records Series and Jude Southerland Kessler of The John Lennon Series talked with bass player, Chas Newby, about that legendary night that he spent with The Beatles! Here is his “fab” story…

Jude Southerland Kessler: On a Tuesday evening, 27 December 1960, The Beatles unloaded their gear and prepared to play the popular Merseyside dance venue, Litherland Town Hall. And with them that night was their new bass player – a long-time friend with whom they got along famously. He was smart, affable, and extremely talented.

Lanea Stagg: With Stuart Sutcliffe (who had been John Lennon’s choice as the band’s first bass player) still in Hamburg, Germany — studying with master artist, Eduardo Paolozzi, and spending time with his fiancée, Astrid Kirchherr — The Beatles had returned to Liverpool looking for someone to fill Stuart’s slot. Knowing that they had several upcoming Merseyside gigs in just a few days, The Beatles reached out to this gifted musician whom they knew, and well…here to give us the rest of the exciting story is that very talented bass player himself, the charismatic Mr. Chas Newby!

Chas Newby: Hi, both, and thank you for inviting me!

Stagg: We’re both so honored to talk with you, Chas…and we can’t wait to hear about this incredible night, first-hand. So, if you would, take us back and tell us what you were doing in December 1960 when The Beatles recruited you.

Newby: Prior to Pete Best’s playing with The Beatles, he played in another band called The Blackjacks, and I was a member of The Blackjacks. Pete was an old friend. I’d known him since I was about twelve or thirteen, and we went to the same school in Liverpool. Around 1959, we started this band with Ken Brown, Bill Barlow, Pete on drums, and myself. And then ‘round about April of 1960, I had to, as part of my Chemical Engineering course, go work in a company in Essex, on the outskirts of London. The same thing was happening with other members of our band; they were moving on with their lives. So, The Blackjacks broke up. That meant, of course, that when The Beatles were looking for a permanent drummer before their August 1960 trek to Hamburg, they knew Pete owned his own drum kit and was available! So, they got in touch with him, and off they went to Hamburg!

Now, later that year — Octoberish — I was back in Liverpool, back at college in St. Helen’s, and obviously, when Christmas came, I was on vacation. Well, I got this call from Pete saying, “Chas, you’d better get down to the Casbah Club! The Beatles want to discuss something with you.” I did, and they did…and it transpired that they wanted me to play bass, on a temporary basis, I have to say. (They told me all about Stuart staying in Hamburg.)

So, I got to play four gigs with them over a 2-week period in the Christmastime of 1960. Now, bear in mind, The Beatles were not “famous” at that time in Liverpool. I knew them well because we’d performed together many times at the same venue: The Casbah Club in Pete’s West Derby home. Peter’s mother, Mrs. Best, ran the club in the basement of their large house. So, at The Beatles’ request, I joined in their group in December of 1960.

First, we played the Casbah Club; then, a gig across the River Mersey in Birkenhead, and it was just fantastic, nice, and we just really hit it! The crowd sensed that we were hitting it, you know! So, everybody enjoyed it. It was good fun…good fun.

Kessler: So, Chas, you were now part of The Beatles, front and center…and on Tuesday night, 27 December 1960, John, Paul, George, Pete, and Chas were booked at Litherland Town Hall — a night that is recognized by so many historians as “the tipping point” in Beatles history.

Newby: Yes, Jude, your DJ friend from the Cavern Club, Bob Wooler (who also worked as a promoter of sorts for some bands) convinced Brian Kelly — who was running the gigs at Litherland Town Hall — that Kelly needed to hear this band, The Beatles. He said they’d just come back from Germany and were dynamic! But Kelly — who already had three bands engaged for this Litherland gig: The Deltones, The Delrenas, and The Searchers — was put on short notice. Nevertheless, he agreed to let The Beatles play in the interval between acts, for only a half an hour.

Now, this was in a “proper ballroom.” Litherland Town Hall had a proper sprung floor, a stage, and curtains, and we — The Beatles — were all behind the curtains as Bob Wooler stepped up to the microphone and said, “Ladies and gentlemen, direct from Hamburg, The Bea…” And he’d just about got the words, “The Beatles,” out when Paul launched into this screaming rendition of that Little Richard song, “Long Tall Sally.” And it just…well, everybody was amazed, you know!

Now, I don’t know what it was like in the United States in 1959 and 1960, but in the U.K., all our heroes had disappeared, right? Elvis was in the army; Buddy Holly had died; Chuck Berry was in jail; Little Richard was back in the church; Carl Perkins was somewhere living at the bottom of a bottle…all our heroes had disappeared! And the people who “filled the gap,” if you like, were nice, clean, preppy boys. Generally, we used to call them “The Bobbys.” You know, Bobby Vee, Bobby Vinton, Bobby Rydell, Bobby Darin…and they were all nice, clean-cut guys, you know: shiny shoes and very “controllable” for the record companies. But there was no killer like Jerry Lee Lewis. There was nobody like Chuck Berry; nobody like Elvis who was, you know, causing all sorts of problems for the music industry then! And that “sanitization” of the music was exactly what The Beatles were trying to get away from!

Now, the people who went to Litherland weren’t really interested in the bands. They just had the music so they could dance. It was a dance hall. But that night when they were suddenly presented by this group of five raucous performers all dressed in black leather, with Paul McCartney screaming at them like Little Richard, they just stopped. They couldn’t believe it!! And gradually, the dancing deteriorated, and everyone just came and stood in front of the stage! And rather than the band providing the music for the punters to dance, they were suddenly witnessing a concert!

Well, at that particular time The Beatles always finished up their shows with the Ray Charles’s song, “What’d I Say.” And in the middle of that song, there’s a sort of shouting part where the audience responds, you know. Well, when Paul was singing that part, the audience went bananas, and they started, responding, you know – [Singing] “Whoa! Whoa! – Whoa! Whoa!” And hearing the commotion, Brian Kelly who was running the dance, thought a fight was going on! He sent his heavies in to “sort out this punch-up,” and instead, he found a crazed audience enjoying themselves!

Beatles Guru, Mark Lewisohn, has credited that night as the beginning of Beatlemania. He says that there were plenty of trials and tribulations for The Beatles from that evening on, but they never looked back. It certainly created a following for them in Liverpool that they didn’t have before! And Brian Kelly? Well – after that, he booked them for two shows a week at various theaters and halls that he ran! He did that until they went back to Germany in April 1961, on the basis of that one performance for 30 or 35 minutes! The Beatles got about thirty gigs out of it, you know! Which was quite good!

And it certainly solidified their aim to make money as professional musicians because playing two gigs a week, you know, a few pounds each — they could just about exist on that! They started getting more and more and more gigs — I mean, suddenly they were at The Cavern Club every day, I think. They were everywhere!

When I went back to college, the guys were talking about what we had done over Christmastime. One guy said he’d been skiing in Switzerland, and he looked quite nicely tanned in the winter sun! And one guy said he’d been up to Scotland to visit his grandparents. Well, eventually, they said to me, “Well Chas, what did you do?”

I said, “I played bass with a rock’n’roll band.” I told them about this band called The Beatles. And it must’ve come back to haunt them in a couple of years’ time when The Beatles became nationally known, and then, internationally, of course! The Beatles went on to conquer the world, so to speak. And I had been a part of it all, over a Christmas break!

To hear the full, charming interview with Chas Newby, go to: https://shesaidshesaid.podbean.com/e/former-beatle-chas-newby-on-she-said-she-said/

For information about Lanea Stagg and the Recipe Records Series, go to: https://www.laneastagg.com

To read the full story of this night, go to Volume 1 in The John Lennon Series, Shoulda Been There, available in Kindle, at https://www.johnlennonseries.com

5 comments on “The Birth of Beatlemania”