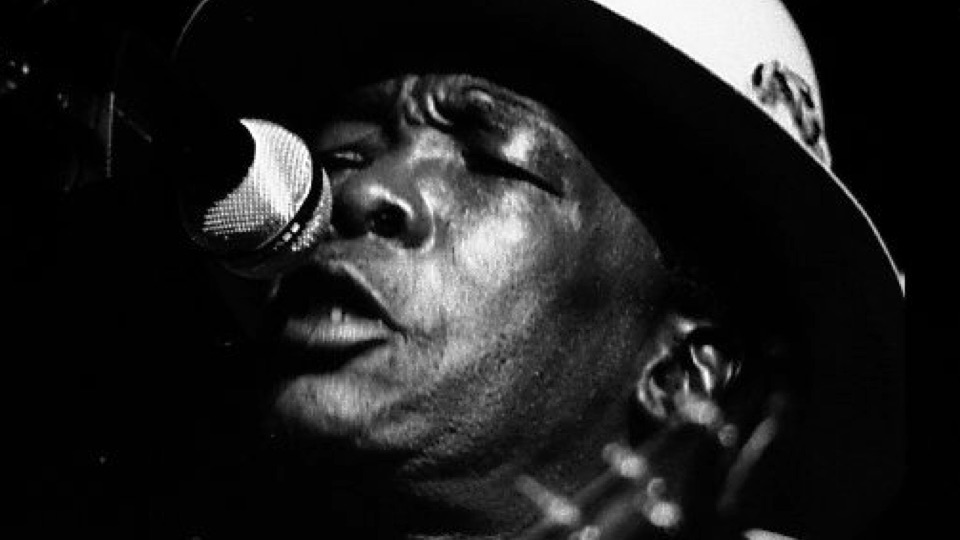 Born in 1917 into a family of 11 siblings, the son of a sharecropper near Clarksdale, Mississippi, John Lee Hooker came to represent the sound of the Delta Blues. His one-chord singing style (sometimes talking, sometimes moaning or hollering) often was only accompanied by an acoustic guitar. And his moseying style of playing, which often didn’t follow a predictable time signature or tempo, made it difficult for backing musicians to play along. Nonetheless, his irreverent style made him a blues legend.

In his youth, John Lee learned the blues song style from his father, William Moore, and began playing guitar when his sister’s boyfriend Tony Hollins gave him his first guitar and taught him to play. While working for Ford Motors in Detroit in 1943, he frequented and performed at a variety of blues clubs. Local record shop owner Elmer Barbee was so struck by John Lee Hooker’s talent that he introduced him to record producer Bernard Besman, who was also the owner of Sensation Records.   Booker recorded a number of songs for Besman. At this same time, John Lee found himself at a club called the Monte Carlo where he was discovered by another local label, Riverside Records. This resulted in the release of the now-classic singles “Boogie Chillen” and “Crawling Kingsnake.” The former became his most popular release to date, selling over a million copies.

Fast forward thru the 1950s and 1960s and Hooker became popular as he toured as part of various blues festivals including the American Folk Blues Festival.   This festival toured Europe and included fellow blues legends such as Muddy Waters, Sonny Boy Williamson, T-Bone Walker, Otis Rush, and Howlin’ Wolf. He signed onto Vee-Jay records, releasing nearly 100 songs during this time. In 1970 he recorded his first album to chart on the Billboard 200, “Hooker ‘n Heat”, as a collaboration with American Blues band Canned Heat.   He later collaborated with Steve Miller and Van Morrison on “Never Get Out of These Blues Alive” in 1972. In 1989, the most successful album of his career, The Healer, was released, which included collaboration with Bonnie Raitt, Los Lobos, and George Thorogood. He was inducted in the Blues Hall of Fame in 1980 and then the Rock and Roll Hall of Fame in 1991, culminating in a Grammy Lifetime Achievement Award in 2000. And you can even catch him playing himself and performing his classic “Boom Boom” in the 1980 film “The Blues Brothers”.

Related: “Dr. John and the Meters”

Over the course of his career, Hooker produced a significant number of recordings, but his Riverside Sessions are considered his truest depiction of the Mississippi Delta blues. On August 2nd, some 60 years after these recording sessions, Craft Recordings re-issued a completely remastered set called The Country Blues of John Lee Hooker.  These were created from the original analog recordings and were released as vinyl LPs allowing you to hear every nuance of Hooker’s style.   Included on the release are early classics such as “Wobblin’ Baby”, “Tupelo Blues” and “Behind the Plow” – and feature both Hooker originals and covers of classic blues songs.

And while Hooker may be an acquired taste due to having a voice that is deeper and grittier than that of many blues singers, any true Delta Blues aficionado will find his musical style both classic and timeless.

0 comments on “The Country Blues of John Lee Hooker”