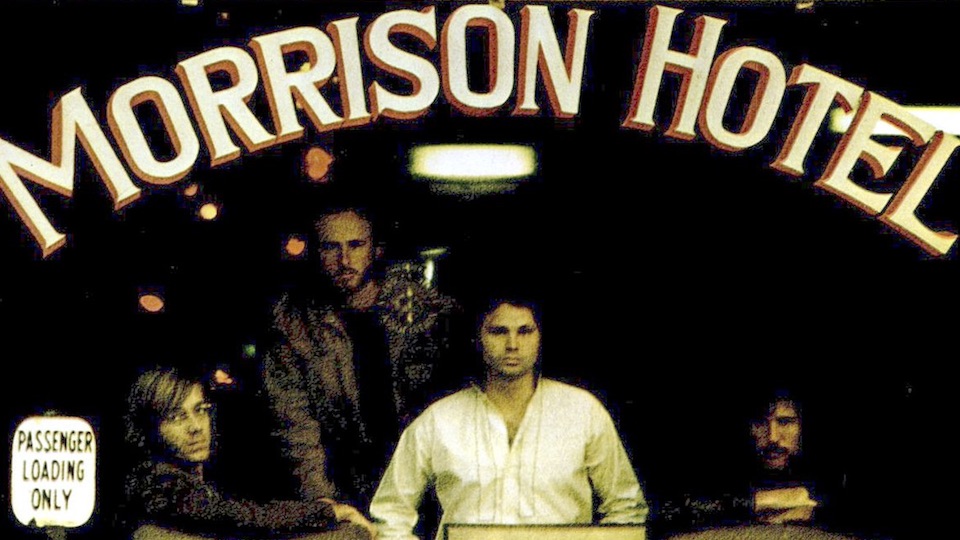 Fashioned as a kind of blues statement, the 1970 masterwork Morrison Hotel proves the most astonishing display of blues-rock The Doors did in their seven-year recording career. Though it in no way endangers the musical status set up by their superlative debut, The Doors’ fifth work is the most impressive exhibition of raw talent from their sprawling catalog.

Related: “What If These Rock Stars Had Lived?”

Plastering his voice over a mountain of colossal drum patterns, Jim Morrison showers listeners with some of the most astonishing vocals the “power poet” ever committed to tape. Projecting a multilayered portrait of confessional promises, the singer lunges forward with an honesty only comparable to that essayed on John Lennon’s explosive Plastic Ono Band. Those who missed out in 1970 can reconnect with it through Rhino Records’ 50th Anniversary Deluxe Edition of Morrison Hotel, complete with a bonus disc of unreleased studio outtakes, and the original album on 180-gram virgin vinyl. This special album collection is set for release on October 9th.

Eager to distance themselves from the brass arrangements and protracted studio durations of their more recent work, The Doors set themselves and producer Paul A.Rothchild the challenge to record with the intensity of their live gigs. Morrison, intensely focused on how his audience might find him, had long exposed himself both as an artist and a person on the confines of a live stage. His naked endeavors proved too literal for certain strands in the rock circus, and the singer was charged with “lewd behavior” at a Miami concert in 1969. Though posthumously pardoned in 2010, the initial accusation bore heavily on the group leading to a panoply of canceled gigs. (Drummer John Densmore recalled that the scandal cost them “a million dollars in gigs”; this writer thought it one of the less scandalous anecdotes that can be read in No One Here Gets Out Alive.)

Darkness washed over the album, as the sinister, circular shifts of time transported listeners from the lucid opulence of the late sixties, headfirst into the uncertain seventies. Morrison pictures an America fading into a cemetery of violence on “Peace Frog”:

“She came into town and then she drove away

Sunlight in her hair

“Waiting for the Sun” captures an evening tide, every bit more burnt out from the shadings that had shaped Morrison’s country. “You Make Me Real” showed a singer suffocating behind the intensity that a night of animal lovemaking held over him. Then there’s “Maggie M’Gill”, one of the many children who could find neither solace nor meaning from a structure slowly making way for the burgeoning counterculture. Keyboardist Ray Manzarek – as pivotal to the band’s sound, as Morrison was to their image – performs “The Spy”s barrelhouse piano to Densmore’s firm, fixed beat, while the galloping drum patterns of “Land Ho!” that pummel so effortlessly behind Manzarek’s melodies are the very definition of liberated playing. Elsewhere, Robbie Krieger’s guitar explodes with the rapidity of an eerie, explosive device, particularly on the proto-punk vignette “Queen of the Highway.”

Between these three men comes Morrison’s soaring voice, capturing a ferocity that could have risen from a place of tremendous confidence. There’s the vulnerability that shifts through “Indian Summer.” There’s the crisp, clear voice that raged on “Roadhouse Blues” and “Blue Sunday” offered listeners a more romantic alternative to the stadium rockers that bellowed all around them. Bathing in a wash of musical colors, Morrison’s singing on “Ship of Fools” is the epitome of economy.

Boogie rockers Status Quo expertly covered “Roadhouse Blues” in 1972, although Morrison – dead at the heartbreaking age of twenty-seven – did not live long enough to hear it. His body was lifted from a Paris bathtub, a victim of the rock and roll excesses that had crept into Morrison’s growing span of music. His literary penchant did not go unrecognized, and his grave at Père Lachaise is nestled between many of the world’s most singular voices in art. His commitment to craft was such that his bandmates felt compelled to replicate it. The Doors would record one more album with Morrison (L.A. Woman), two without Morrison (Other Voices and Full Circle), before re-grouping to put some of Morrison’s unfinished elegies to music (An American Prayer). Together, they capture a band searching for a conclusion in a world that offers few of them. None of the albums were as good as Morrison Hotel.