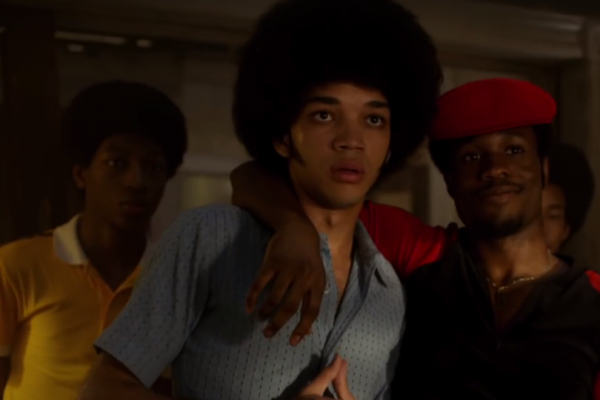 If you’ve already torn through Netflix’s excellent ode to the ‘80s Stranger Things, you don’t have long to wait for its next binge-worthy historical drama. Arriving from director Baz Luhrmann on August 12, The Get Down rewinds to New York City in the ‘70s. Like the best songs and the show’s infectious first trailer (below), the series has the pedigree and the verve to be the thing people won’t be able to get out of their heads.

Set against the background of a city literally on fire, The Get Down covers two years in New York from 1977-1979, with disco in its death throes and hip-hop just being born. At its pulsing heart is a group of South Bronx teens who are both witnessing and driving the evolution in music and culture. Poetry-loving Ezekiel “Books” Figuero (Justice Smith, Paper Towns) and young DJ Shaolin Fantastic (Shameik Moore, Dope) cement their friendship around their mutual love of rhymes and music, while Shaolin is mentored by rap legend Grandmaster Flash (Mamoudou Athie). Mylene Cruz (Herizen Guardiola) is eager to break the bounds set by her strict minister father (Giancarlo Esposito, Breaking Bad), though her uncle (Jimmy Smits, Sons of Anarchy) roots for her success. Dizzee (Jaden Smith, After Earth) is a burgeoning artist as well, but he uses spray paint for his craft in a neighborhood increasingly covered with graffiti. The Get Down earns bonus points for shooting in the Bronx and around New York. This is essential for shows and movies where the city itself is a character, even if that character has evolved in the decades since.

Luhrmann’s status has dipped with both audiences and critics over his last few films (The Great Gatsby, Australia), but the man knows how to combine music and visuals like few directors working now. Think the titular characters’ meeting set to Desiree’s “Kissing You” in Romeo & Juliet, the soaring pop mash-up “Elephant Love Medley” in Moulin Rouge, or the decadent party scene boosted by “A Little Party Never Killed Nobody” in The Great Gatsby.  Here music again takes center stage for the filmmaker, with the story and the soundtrack inextricably intertwined due to its focus on young artists. From its most recent trailer (below), the show looks to feature Luhrmann’s trademark energy without devolving into the over-the-top excess he’s been known to indulge in on occasion.

If Australian-born Luhrmann doesn’t feel like a natural fit for the subject matter or setting, a few key players up the show’s authenticity. Hip-hop standard bearer Nas serves not only as an executive producer on The Get Down but he also writes the lyrics delivered by the series’ narrator, the older Mr. Books, at the beginning of each episode. Though Nas doesn’t star as Mr. Books himself, Daveed Diggs should salve any fans’ disappointment in the part. The recently minted Tony winner is fresh off his dual role of Lafayette and Thomas Jefferson in Hamilton, where the speed of his “Guns and Ships” verses should have impressed even the fastest of rappers like Twista and Busta Rhymes. The real Grandmaster Flash is also an associate producer on the show, and hip-hop historian Nelson George takes on supervising producer duties. As one of the show’s lead writers and an executive producer, Pulitzer-Prize-winning playwright Stephen Adly Guirgis ensures that the dialogue will be as strong as the soundtrack.

The show runs 12 episodes, which have been divided into two parts.  In case you can’t be trusted not to speed through your queue (I’m right there with you), another reminder: the first six episodes will be available to stream Friday, August 12, with the second part appearing next year.