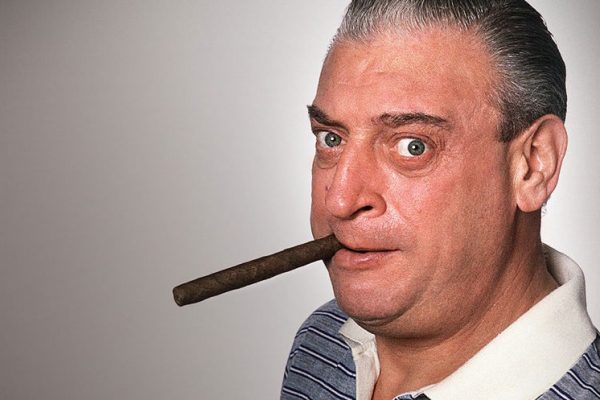 Rodney Dangerfield’s wife Joan has carried a virtual torch for her husband since the great comic died in 2004. A creative force herself, she’s in the midst of launching a revolutionary immersive entertainment experience, called RockDome, set to break ground in Las Vegas later this year. Naturally, she’s got Rodney-related projects in the works too. So we couldn’t resist asking her about Rodney.com, his Webby-nominated website.

Q: When did the Rodney Dangerfield website come about?

A: This may surprise you: Rodney.com launched 21 years ago, in February 1995. Rodney was the first celebrity to personally own a website and create content for it. He interacted with fans who visited his site via an “E-mail me” link, often surprising people with a reply. Some people said they bought a computer just so they could visit Rodney’s site. (Click here to see a screen capture from WaybackMachine circa 1996.) The idea of having his own website appealed to Rodney because he would get upset when reporters misquoted him or corrected his grammar. One word can make all the difference when you’re trying to be funny. Essentially, he wanted to be able to control his material and this was the perfect platform to do so. He couldn’t believe there was no censorship, no sponsors to worry about. Plus he could get immediate feedback from fans. He loved it.

Q: What’s been the most popular content on Rodney.com so far?

A: Initially, most people only had access to computers at the office, so Rodney envisioned them sneaking a visit to his site for a “laugh break.” We received daily stats and the jokes were always the most popular. They still are, especially when told in Rodney’s own voice. Websites did not have audio when Rodney’s site was first launched. RealAudio came along a few months later. The quality was surprisingly good, but our internet service provider was new in the business (almost everybody was at the time) and couldn’t afford to license it. So Rodney paid for the license himself and also hired someone to write a program to rotate a few hundred jokes daily as “.wav files.” His “Joke Of The Day” was a big hit and kept people coming back to his site on a regular basis.

Rodney strived to keep his site state of the art and added “live streaming” video in 1996. Before long, it seemed like everybody had a homepage. At one point, we changed the “Joke Of The Day” to a pop-up video. That worked great until people started blocking pop-ups to avoid X-rated advertisements. We went back to a text and audio version of the jokes. I remember when webcams came out, Rodney seriously wanted to have one installed in our bedroom. He thought it would be funny for people to tune in and watch him sleep. I said no.

Rodney hosted a series of specials on ABC in the ‘80s. In the TV section of the site, you will find a 3-minute clip from “It’s Not Easy Being Me” where Bill Murray and Rodney play superheroes competing for the same girl. It is hilarious. Plus you get to see Rodney in tights.

Q: What’s coming up on the site of particular interest?

A: I am going to be adding more pictures like the one below, and tell some of the stories behind them. I will also be adding more of Rodney’s handwritten pages to the archive section.

Q: What’s the weirdest response you’ve got to your site? Anything memorable?

A: A couple of things stand out. Thanks to his pioneering efforts in cyberspace, WebSight Magazine named Rodney one of the most influential people on the Internet. Rodney noted he was “ranked higher than some guy named Bill Gates.” As I recall, he was below Al Gore. Another unforgettable occurrence was being contacted by a male nurse who was in the witness protection program. True story. He drew Rodney’s blood and saved a vial. Years later, he returned the souvenir so now, if they ever perfect the science of cloning people, I have a preserved sample of Dangerfield DNA ready to go.[amazon template=right aligned image&asin=B00FK9RUO0]

When Rodney passed away, I suspended the website for a couple of years while I sorted through all of his belongings, cataloguing and savoring everything he touched, every photograph, every word he wrote, eventually selecting those things that best reflected the original authentic person that he was. After meeting with a number of companies, Rodney.com was finally recreated by Shine United and relaunched on his birthday in 2013. The following year the site was nominated for a Webby! We lost out to Beyoncé, but it was such a victory that Rodney’s site was getting accolades after being dormant for so long. And now, with the help of a couple of clever guys, the Bell Brothers, Rodney’s Facebook and other social media sites are starting to get attention.