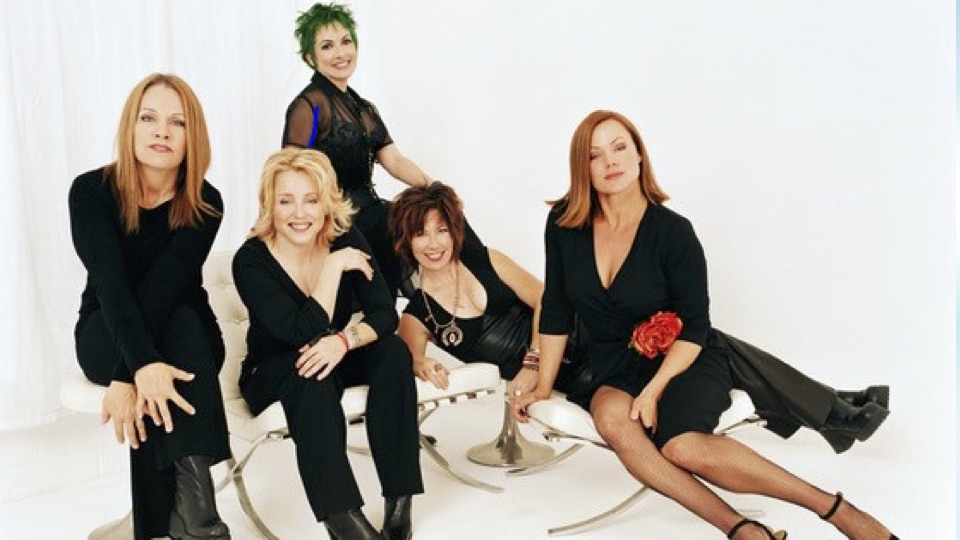 The Go-Go’s was a wholesome all-girl band that burst into the 1980s with delightful pop tunes like “Our Lips are Sealed” and “We’ve Got the Beat.” Only part of that last sentence is true and the new documentary about the group readily provides the contrast. Directed by Allison Ellwood (“Laurel Canyon” docuseries, “Eagles” documentary) this biopic takes us from their surprisingly gritty start, through their years of huge success, subsequent decay, and reforming to perform today. Premiering at Sundance, it uses photos, clips, and audio from shows – in addition to interviews with both current and former members. The Go-Go’s penned a new song for the documentary and had planned a tour (rescheduled now for next year).

The Go-Go’s actually started as a punk band that was born of the late 1970s LA punk scene. Original members Belinda Carlisle (vocals), Jane Wiedlin (vocals/ guitar), Elissa Bello (drums), and Margo Olivarria (bass) organically came together to form an all-girl punk band, determined to write original songs and play their own instruments. Initially, they attracted attention as an oddity in a generally male-dominated genre. Their output was rough; they didn’t play well, and they mostly tried to emulate the punk sound culminating in Carlisle’s more-shouting-than-singing lyrics that were sarcastic, angry, and defeated. But they had an energy that attracted the attention of Ginger Canzoneri, who agreed to be their manager. She had them record a five-song demo in NYC and sent them on tour with Madness and The Specials in the UK. While there, one demo song, “We’ve Got the Beat” was released on Stiff Records and turned into a relative hit. Upon returning they appeared at famous local LA venues such as Whisky a Go-Go as opening acts for local bands. This along with their single resulted in a growing following. Guitarist/keyboardist Charlotte Caffey joined the band around that time.

While repeated attempts by manager Canzoneri to find a record label failed, upstart and trendy label I.R.S. records co-founder Miles Copeland caught them live one day, saw something special, and signed them to record their first album, Beauty and the Beat, which soon became a number one album. They were the first all-girl band to have their debut album become #1.

At that time, bassist Margo Olivarria, who was unhappy about the direction of the band, became ill before a tour and was soon replaced by guitarist Kathy Valentine (Girlschool), who quickly learned to play bass. Drummer Elissa Bello was kicked out of the band and replaced by Gina Schock, a much better musician. With those two changes, the final makeup of the Go-Go’s was set. The addition of these two talented musicians, along with Valentine insisting that they practice more, really raised the quality of the music.

Songs like “We’ve Got the Beat”, “Our Lips Are Sealed”, “Vacation” and “Head Over Heels” played perfectly in videos that were put into high rotation on the fledgling MTV music television. The rest is history.

The documentary instead focuses on the significant challenges faced by the group. Drugs and alcohol caused problems for various members of the band. Jane Weldin struggled with suicidal thoughts until diagnosed with bipolar disorder. Guitarist Charlotte Caffey kept hidden a potentially fatal heroin addiction. After complaining of being out of breath at the end of gigs, Drummer Gina Schock received the diagnosis that she had a genetic defect in her heart, which resulted in surgery. Belinda Carlisle admitted she had become an egomaniac and was reluctant to let others in the group sing lead on any songs, including when guitarist Weldin asked to do so specifically. There was mounting tension when members who wrote the songs were significantly more highly compensated than the others who didn’t. Beyond that, there were the more common challenges of being constantly pressured to tour and release music without much time to recuperate.

The biopic uses original video and audio recordings to document the progression of the group. It also includes very candid current interviews with current and former members, who contribute specific and sometimes differentiated commentary about the various events. Former members provide raw feedback on their resentment for being removed from the group. Original manager Canzoner can barely speak about her sadness for being summarily and unexpectedly replaced. The Go-Go’s toured as the opening act for The Police, and drummer Stewart Copeland provides information on how well the two bands jibed.

In the end, this Go-Go’s documentary is an eye-opening and honest look at the history of the band, each individual, and the dynamics that resulted. Toward the end of the biopic, guitarist Jane Wiedlin put it bluntly by suggesting that because they had mainly experienced non-stop success, the band never grew emotionally; because it’s failure that usually causes growth.

The documentary can now be seen on Showtime.

PR Photo from Showtime (fair use)

1 comment on “The Go-Go’s Documentary: Their Lips Are Unsealed”