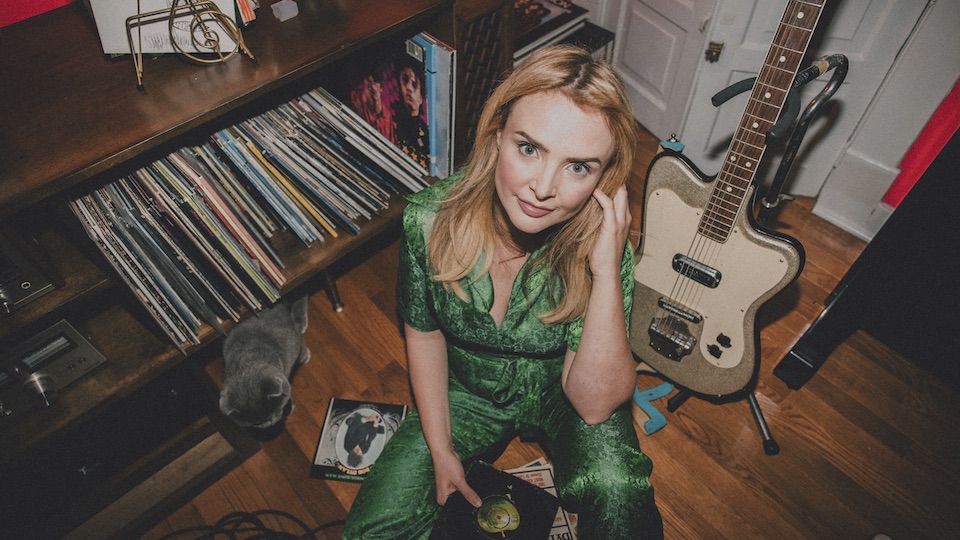 “I wasn’t really aware of Bob Dylan growing up,” singer-songwriter Emma Swift admits over a video chat call on a Sunday afternoon. “I never had that magical right of passage thing.”

You’d never be able to tell now. Swift, still adjusting to the newfound virtual approach to “live” music and deeply moved by the recent political turbulence in the United States, has turned her attention to America’s scribe himself, and is due to release an album of Dylan covers this August titled Blonde on the Tracks. It features eight songs, and includes a cover of one of Dylan’s latest creations, “I Contain Multitudes” — a years-long project finally come to fruition.

She began recording a handful of Dylan tunes around the time of the 2016 election, a period in which she recalls feeling a “fairly deep sadness.” Swift, a transplant from Australia but a resident of the US for many years, found herself dwindling, musically, and emotionally.

“I wasn’t writing any songs and I live in Nashville which is songwriter central, so that was making me feel even worse,” she said, “I felt like I couldn’t find my home in the world.”

So she decided to book some time at Magnetic Sound Studios and track some Bob Dylan songs, for the hell of it.

For Swift, Bob Dylan first arrived on her musical palette like a prophet. Born in the 80s to a set of suburban parents, she was introduced to Dylan’s catalog the way many younger fans do: through second-hand records.

“Everything that I have for much of Dylan’s catalog is coming to me, not only after the fact but a really long time after the fact,” she said, noting that those who were around during the 60s had a much different and immediate view of Dylan and his work. “It’s like finding buried treasure in a way, when you’re from a different generation.”

A piece of that buried treasure came into her possession around age 18, when she picked up a copy of Blood on the Tracks. She dove in and has been collecting Dylan records ever since.

Swift also carried her female musical influences with her through her teenage years, learning to sing, by her own admission, by playing Linda Ronstadt’s “Heart Like A Wheel” far too many times to count at age 15, and spinning records from women like Lucinda Williams, Sandy Denny, Gillian Welch, Sinead O’Connor, Billie Holiday, and Ella Fitzgerald.

“Ella Fitzgerald singing the Gershwin songbook possibly taught me more about singing than any other piece of recorded music,” she said. “It was really a fantastic place to go and explore.”

And explore she has. Swift, who describes herself as an “indie rock folkie who happens to have pedal steel,” relocated to Nashville in 2013, recorded a solo EP in 2014, and has released several singles with her partner, the English musician, Robyn Hitchcock. Of course, she’s hardly the first musician to tackle the Dylan songbook, but she aims to uncover something more with Blonde on the Tracks.

Related: “The 10 Best Bob Dylan Songs You May Have Never Heard’

“What I wanted to do was try and pick some songs from the Dylan catalog that maybe could do with a revisiting and being sung by a woman,” she said, noting that when Dylan songs were first covered by women back in the day, the mode of operating mainly included the reversal of pronouns and multiple lyrical changes. Joan Baez recorded a version of “Mama You’ve Been on My Mind” in 1965 under the title “Daddy You’ve Been On My Mind.” Linda Ronstadt would employ a similar tactic a few years later and release a cover of the same song but renamed “Baby You’ve Been On My Mind.” Just how much jurisdiction the women had over how the song was sung, produced, and released is unclear.

“I just really didn’t want to do that,” Swift said. “I wanted to sing these songs with my voice but not change any of the gender pronouns. That was really important to me.”

“I wanted to explore what these songs might mean when sung from a female perspective,” she continued, citing Swiss psychiatrist, Carl Jung, as a source of learning. “I’m very interested in the way all people — be them female, male, non-binary — inhabit feminine and masculine energies. And I’m really loving the way our world is evolving so that people can explore all aspects of the personality and take what they want from some and leave other things behind.”

With six, carefully selected songs recorded in 2017, Swift was set to release Blonde on the Tracks as an EP. That is until a certain someone unveiled an entire treasure trove of new material.

“I haven’t heard Rough and Rowdy Ways enough yet to give you a definitive answer on how I feel about it, because like every other Bob Dylan record that I’ve ever owned, how I feel about it is likely going to grow and develop and change over time,” she said about Dylan’s newest album released in June. “That, to me, is what makes him such a wonderful artist.”

“The first time I heard ‘I Contain Multitudes,’ it felt to me like a hymn or a mantra — a total artist’s guide to life,” she continued. “It was Bob Dylan giving a bit of insight into all of the things that he loves in his kind of fabulous and brilliant Gemini mind.”

Swift immediately lept into action, emailing her producer, Patrick Sansone of Wilco, and telling him that Blonde on the Tracks needed just a little bit more. In the midst of the Coronavirus lockdown, she bought some home recording equipment, sat down with Robyn Hitchcock and his guitar, and covered “I Contain Multitudes.” An at-home version of “Simple Twist of Fate” was recorded to fill out the rest of the album.

But with the music industry in a pandemic-induced slump and no offer from a record label, Swift once again found herself doing something out of the box.

“I’m so independent. I’m so headstrong,” she said. “I’ve got a lot of ideas about how I want things to play out, and how I will or will not be sold, and the only way to have any kind of control over that was to start my own record label. So I did.”

Thus, Tiny Ghost Records was created, with Swift managing all planning and promotion surrounding Blonde on the Tracks, and running her musical business model more or less “like it’s 2001.”

“Self-esteem is something a lot of musicians really struggle with, I know I have,” she said, “and it’s hard to have the sense of entitlement to go ‘you know what? I’m going to build a paywall around this’ when everyone else is giving it away for free.”

Swift will not be releasing the record on streaming services like Apple Music or Spotify, citing their extremely poor reputation for compensating artists, and is instead encouraging fans to support her work via Bandcamp or by purchasing the album at local record stores.

Of course, when it comes to revolution, Dylan, hailed as one of the kings of social justice songwriting, is a damn good place to start. And in an era that both mimics the turmoil of the 1960s and presents its own series of challenges, the art of the protest song is making a comeback.

“We’re having this very intense cultural experience,” Swift said. “Huge shifts in the outside world are happening all the while many people are actually stuck in their internal world, not going out anywhere, and I think a lot of writing is getting done and that’s going to be really fascinating to see how that plays out.”

For Swift, who doesn’t typically consider herself a writer of protest songs, it played out in the form of her very first protest song, written a week before our chat. On July 4th, 55 peaceful Black Lives Matter protestors were arrested in Nashville — something that struck Swift greatly.

“What’s happening across America right now is so heavy and it’s so important that we use this moment to actually make real change happen instead of just talking about it,” she said. “There was just something in that [the arrests in Nashville] that just destroyed me emotionally, and so I did what I do and I sat down at the piano and I pretended to be Joni Mitchell and away I went.”

The song is due to be released as a single in September.

As for other future plans, Swift is content to write, create, and enjoy other people’s art until the music industry can safely return to live events. She looks forward to the release of Blonde on the Tracks — an impressive project that was born out of deep emotions and a few roadblocks along the way. Swift knows it’s all been worth it.

“Sometimes in life that can be the best thing that happens for you.”

Blonde on the Tracks is out August 14th on Bandcamp and in record stores on August 28th. Formats are CD, cassette, vinyl and digital download, as well as streaming through the Bandcamp app.

0 comments on ““Blonde On the Tracks”: Emma Swift’s Fresh Take on Dylan”