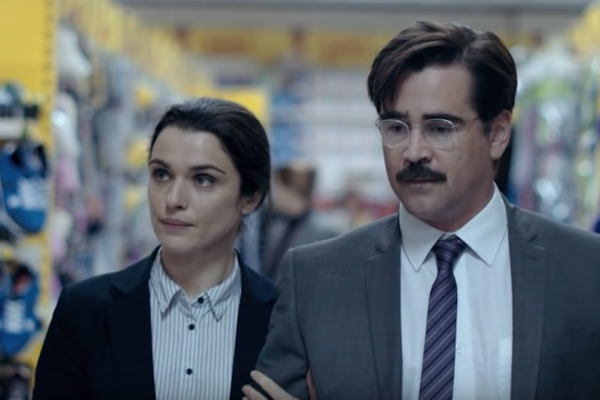 If you’ve ventured beyond the comfort of your air conditioning in the past few months, you’ve likely heard someone – in fact, many someones — mention The Lobster. Released in May with the Cannes’ Jury Prize in tow, this film’s been steadily building momentum and shows no signs of slowing down. It’s been particularly popular among Gen X-ers, and once you hear a bit more, you’ll understand why.

First off there’s the drawing power of The Lobster’s two leads – Colin Farrell and Rachel Weisz – who can be seen on alternate posters, each embracing a negative space shaped like the other. I’ll say right now, by the way, that you’re forgiven for not thinking those two actors are enough, given the cryptic artwork but look more closely at the poster and you’ll also see it’s billed as “an unconventional love story,” which feels just about exactly right. How unconventional?

The premise is that we’re now living in a world where every citizen must take a hard line on their relationship status. (Facebook update, anyone?) Either you’re a member of a couple, linked by discernible physical traits like a lisp, great hair, or a tendency toward nosebleeds, or you’re a “loner,” rejected from society and left to scrabble out an existence on the fringe. When we meet the short-sighted David, played by Farrell, he’s being rejected by his similarly short-sighted wife, who’s leaving him for another short-sighted man. In order to find a new partner, David checks into a matchmaking hotel where guests are given 45 days to find a suitable mate. Those who don’t are turned into an animal. As testament to this ultimatum, David is accompanied by his dog — who is actually his brother who was unable to complete the program.

Outlandish facts like these are presented simply, casually; the fantastic here is to be noted, not marveled at. There is no love, only coupling out of desperation, at this hotel where daily one is asked how far would you go to find a mate if your life depended on it? Limping Man (Ben Whishaw) bashes his own face to court Nosebleed Woman (Jessica Barden); Biscuit Woman (Ashley Jensen), for her part, offers doggie treats and a blow job on a bus ride to the woods. Masturbate like The Lisping Man (John C. Reilly) and you’ll have to stick your hand in an activated toaster.

Sound depressing? At many points, it is. But other times, instead of a ragged sob, I’d find a bark of laughter working its way through me. Somehow, despite taking on a topic as freighted as the pressure to pair off, a pressure that Gen X-ers have always felt keenly, The Lobster manages to truly walk the line between tragedy and comedy. Every time the situation verges on the pretentious, an exotic animal walks by in the background.

All that levity may not coddle you through The Lobster’s darker moments but it helps get you through some merciless depictions of violence, made all the more brutal for how well-justified they are. Every time you think you understand the boundaries of The Lobster, director Yorgos Lanthimos jars you back into wakefulness. After the ruthless final moments, which contain almost no dialogue, I left the theater with a stomach that I can only refer to as “churning”. Returning to the real world felt more like bursting a bubble – albeit it a bubble that simply released me to the bubble I’d previously been occupying unawares all along.

0 comments on “The Lobster: A Once-in-a-Generation Film”