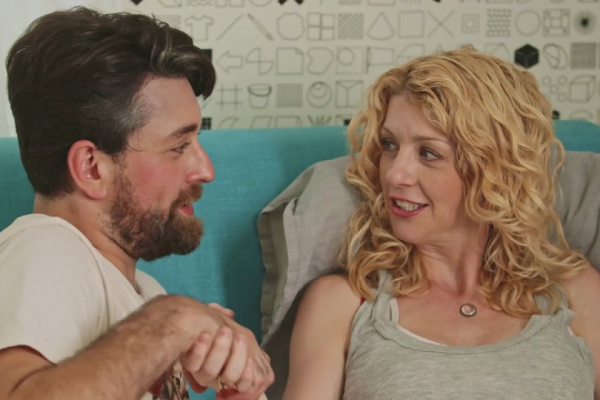 No, it’s not just a cruder, edgier, gayer Portlandia. Yes, The Benefits of Gusbandry is an incredibly self-aware comedy of PC errors set among the hipster set. But unlike IFC’s Carrie and Fred, this web series’ main characters Jackie (Brooke Totman) and River (Kurt Conroyd) are all about sex…even if they’re not having it with each other.

Creator Alicia J. Rose and co-writer Courtenay Hameister’s sharp web series isn’t the new Will & Grace, with a three-act structure and predictable character beats. And it’s not an alt Modern Family, where gay daddies focus on the PTA and children’s parties instead of leather. The Benefits of Gusbandry is a more gimlet-eyed thing, a goofier, looser series of weed-and-neurosis-driven vignettes inhabited by characters who know how to perform their own lives. They’re alienated, mind you. But hey, they’re in Portland, where the only way to guarantee you won’t run into an ex is to boycott friends’ parties, the legal-weed emporium, local coffee bars, and performance events involving half-naked Jesuses. In this life, you have to suck it up and step out.

These aren’t millennials, though. Jackie and River are older than the fresh-fleshed, sexually fluid youngsters whose identifications flow from CIS to non-binary with slinky-esque élan: These two are more likely to be pinballing from awkward-date pillar to please-kill-me post. Boo-hoo, some would say. But not River and Jackie. They aren’t the self-pitying sort, even if they are high-maintenance, privileged, and gifted with the time and energy to obsess about coffee codes, the rules of attraction, and competitive gaydar-reading. (Jackie loses at that one spectacularly when she fails to immediately realize that her fist date with River isn’t a date date. Though to be fair, it’s easy to be confused by a guy whose cheeky verbal assessment of her firm yet bouncy butt — “like two puppies fighting under a blanket” — is punctuated with a little grope and a smack. Anyway, it certainly beats being “snout-raped by a labradoodle” named Odysseus at a party where the dog’s the only male animal remotely interested in Jackie’s parts.)

Gusbandry ingeniously manifests the anxiety that goes with our newly relaxed border controls: those old jokes about boyfriends who are just gay enough (to like show tunes, to look sharp, to cook more than Kraft mac ‘n’ cheese) are a different kind of funny when said boyfriend turns out to be only gay enough to be, well, gay. And Gusbandry doesn’t stop there; if it did, it would be just another comedy about a woman, fed up with what dicks men are, bonding with a “sister” of the opposite sex. Truth is, River’s flailing too: He knows his way around hook-up apps but when a burly gent at a bar sends drinks and meaningful glances to the table he’s sharing with Jackie, they’re equally clueless as to who’s cruising who. The answer—”why, both of you”—is enough to send them both running for a pint of ice cream and a cozy besties cuddle.

As Jackie’s sweet and vaguely clueless dad puts it: “Gay has changed so much from when I was a kid.”

0 comments on “A Sex Comedy for Our Times”