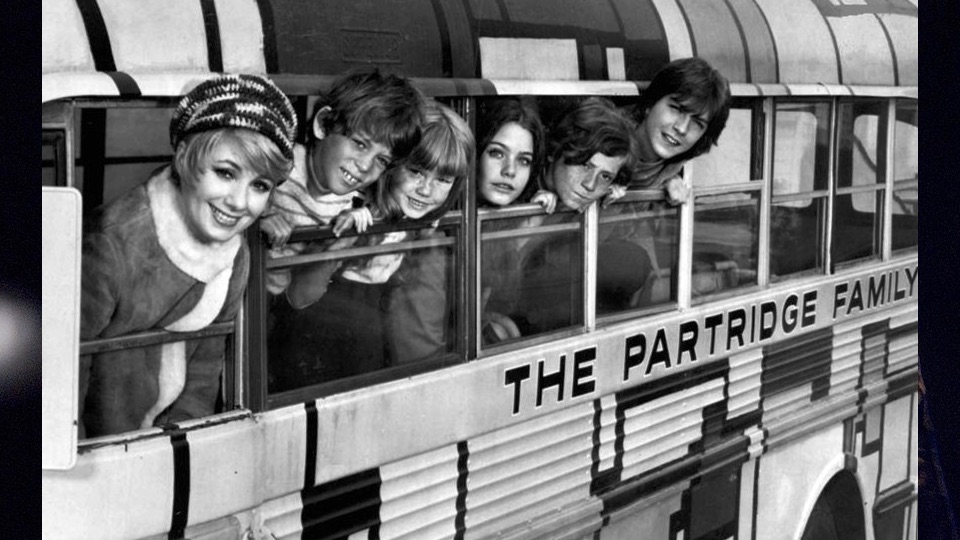 First, let’s address the proverbial elephant in the room: the Partridge Family was not an actual band. They were a fictional family of pop musicians created by screenwriter Bernard Slade and honed with corporate care for the first half of the 1970s through their LPs and namesake sitcom.

On the TV show, the Partridges served up benign hijinks in their suburban home and traveled to music gigs in a groovy tricked-out school bus. The crew consisted of widowed mom Shirley, bright-eyed teen heartthrob son Keith, angelic daughter Laurie, scrappy son Danny, and the two youngest, Chris and Tracy, who didn’t do much more than follow adorably in everyone’s wake. Oh, and their hapless manager, Reuben Kincaid, who had great comic chemistry with scheming, red-headed Danny.

The Partridge Family was a sitcom hit from 1970-74, making a reluctant global superstar out of the late David Cassidy, who played Keith, and a career resurgence for his real-life stepmom, movie and stage star Shirley Jones. It was filled with wholesome humor, telegenic kids in crushed velvet costumes and minimal edge, concluding in a musical performance.

Only two members of the group (Cassidy and Jones) did any real singing or performing – the others just vamped attractively on-screen. In time, the show’s popularity waned and The Partridge Family was subsequently mocked for being pure bubble-gum in grittier times. But this seems an unfair rap to a gently witty show that holds up beautifully and remains a clever tribute to the love of family in a clean-cut alternate universe. They also gave us the #1 hit song of 1970. Their tracks are tuneful and go down easy. They are a sweet staple of an era gone by and deserve a fresh listen. Here are some of their best.

From the album Up To Date, this is a lilting, catchy song about a young man yearning for an elusive love. The Partridges tended to sing either upbeat love tunes or songs of romantic desire, and this skews towards the latter. Written by Wes Farrell and Gerry Goffin, two revered songwriters of the era, David Cassidy amps up his always-sweet vocals and does right by a song that stays with the listener and holds up nicely with the years.

Another Wes Farrell tune (along with Eddie Singleton), “Brand New Me” appeared on The Partridge Family Album, an early LP that mixed the pop confection genre with more soulful themes. The gorgeous harmonies and chord changes here are matched by Cassidy’s handling of the lyrics, “You’re gonna see/a brand new me/It’s you that’s on my mind this time/I’ll be around/I’ll never let you down/Can’t you see my feet are on the ground.”

Too brief to be played on the radio or on an album, this is the unjaded, joyful opening theme to their TV show. Opening with a waterfall of keyboards and a ruffle of drums, Cassidy sings this minute-long ode to happiness, love and good times. The words “Hello, world, hear the song that we’re singing – c’mon, get happy!” are known to darn near anyone of a certain age. Their original theme song was more of an expository laying out of the plot, somewhat along the lines of the “Gilligan’s Island,” but subsequent seasons let that go.

This track goes deeper than most Partridge Family numbers, with its aching lyrics that speak to existential loneliness and a desire to connect with the world. It’s got a great soulful vibe in its chord changes and harmonic back-up singing. The plaintive tune has a polished sophistication…with one notorious glitch. “Doesn’t Somebody Want to be Wanted?” is infamous for its cringeworthy “spoken word” bridge at 1:44 that is epic in its unintentional absurdity. David Cassidy hated having to do this in the studio and refused to sing it live. But it still doesn’t take away from the song’s impassioned sweetness.

Welcome, ladies and gentlemen, to the best-selling single of 1970! “I Think I Love You” is The Partridge Family’s most successful song and the one with which they are most closely identified. It is a peach of a tune, written by Tony Romeo and rounded out by the best session musicians in the business at the time. Even the most jaded soul cannot help but love this upbeat number, filled with the joy of the discovery of new love. The subtle dissonance of the “Ba ba ba ba ba ba ba ba ba” in the opening bars builds up to one of the most delicious pop tunes of all time, a crowd-pleaser across the generations.

11 comments on “The Partridge Family: Come On, Get Happy!”