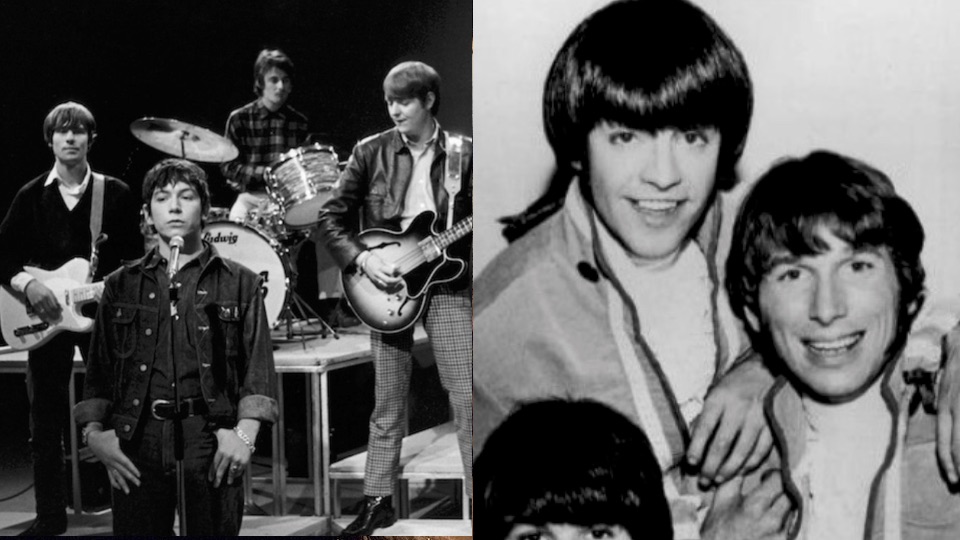 It’s been said that the National Football League’s initials, NFL, really means “Not for Long,” as the average length of a player dishing out quality hits is 3.3 years.  The same can be said about the comparable careers of the Animals and Paul Revere and the Raiders.  For a three to four-year span, the two groups were at the top of their hit-making game.

The Raiders’ signature tunes were also within a three-year span, starting in 1965 (“Just Like Me”) through 1966 (“Kicks” and “Hungry”) and ending in 1967 (“Him or Me – What’s It Gonna Be?”)  Yes, the Raiders knocked out their only #1 hit, “Indian Reservation,” in 1971, but this was really singer Mark Lindsay’s (assisted by producer Jerry Fuller) production who, with Paul Revere’s blessing, marketed it as a Raiders record for contractual reasons.

Both bands also tapped the talents of a two-person hit-making machine named (Barry) Mann and (Cynthia) Weil.  Mann-Weil wrote the Animals’ “We Gotta Get Out of This Place” and the anti-drug song “Kicks,” a tune that Lindsay explained, “…was written as a cautionary tale for (songwriter) Gerry Goffin because at that point in time, apparently, Gerry was getting into some really hardcore drugs. Barry and Cynthia wrote that because they knew (the songwriting team) Carole King and Goffin very well and they wrote it as kind of like a warning to Gerry, like, ‘Wake up.’”  The Animals mind-bogglingly rejected this “Just Say No” ditty only for the Raiders to astutely say, “Yes, we’ll take that.”

Perhaps the reason why the Animals didn’t sing that a person doesn’t need kicks “to help you face the world each day” was because it would’ve meant two band members were being hypocrites.  Hilton Valentine, the Animals’ guitarist, noted:

“Eric (Burdon, singer) and I were smoking dope and taking LSD and the rest (of the band) were getting drunk. They didn’t think getting drunk was bad, but that what we were doing was horrible.  At least we weren’t slurring our words and falling over!”

Besides sharing top songwriters, the bands also worked with two of the top producers of the ’60s.  The Animals were guided by Mickie Most (Donovan, Herman’s Hermits) while the Raiders’ toiled with Doris Day’s son, Terry Melcher (Byrds), who assisted in the group recording the awesome Animals’ song “I’m Crying.”  Melcher and Lindsay would (temporarily) co-write and cohabit in a Benedict Canyon house.

But for the most part, it’s not who produces a record; it’s whose face is on the sleeve that will induce a teen to purchase a piece of plastic.

“We saw that the vision of the band was being guided by Mark and he was seeing things more in a teenybopper level, kind of catering to that younger audience because he was kind of enamored by their worship he said he got from them, as a teen idol.  Terry wanted to do more of our songs, but Mark kind of put the squash on it.  He was doing songs like ‘Little Girl in the Fourth Row.’”

In the Animals’ case, Eric Burdon, who was John Lennon’s inspiration for the “Eggman” in “I am the Walrus” (because he regaled John of a girlfriend who broke an egg on Eric’s stomach during sex), possessed arguably the most powerful and recognizable voice in rock ‘n’ roll history.  But the record-buying public didn’t buy an Animals’ record because Eric looked like, as he noted in “Spill the Wine,” an “overfed, long-haired leaping gnome.”  The reason Animals’ records sold was because of what was in the grooves.  As Bruce Springsteen noted in his 2012 South by Southwest (SXSW) keynote speech:

“Eric Burdon was like your shrunken daddy with a wig on.  He never had a kid’s face. He always had a little man’s face.  He couldn’t dance.  They put him in a suit, but it was like putting a gorilla in a suit. Then, he had that voice that was like, I don’t know, Howlin’ Wolf, or something coming out of some 17 or 18-year-old kid.”

As in the Raiders’ case, creative and non-creative differences also broke up the Animals.  Valentine said the reason was:

“Arguments. We couldn’t get on with each other. We were working too much, always on the road, always in each other’s pockets, and we weren’t seeing any money.”

But in the long run, perhaps it was for the best that the two lead singers went their own way.  Indeed, if it wasn’t for creative differences, Lindsay and Melcher may have met an early demise: the house they lived at in Benedict Canyon (10050 Cielo Drive), was invaded on August 8, 1969, by four members of the Manson Family who then slaughtered five of its occupants.  Lindsay was later informed by the police that he and Melcher’s names were written on a “Manson death list.”  Mark recalled that in 1969:

“I had a .44 Magnum under my pillow because I had some weird fan messages from the year before and I slept with it for years.  I always wondered what had happened if Terry and I had still been living there and I had that .44.  Things might have been different.”

…and Quentin Tarantino would have never made and included three Raiders’ songs in his Once Upon a Time in Hollywood film.

4 comments on “The Raiders Vs The Animals”