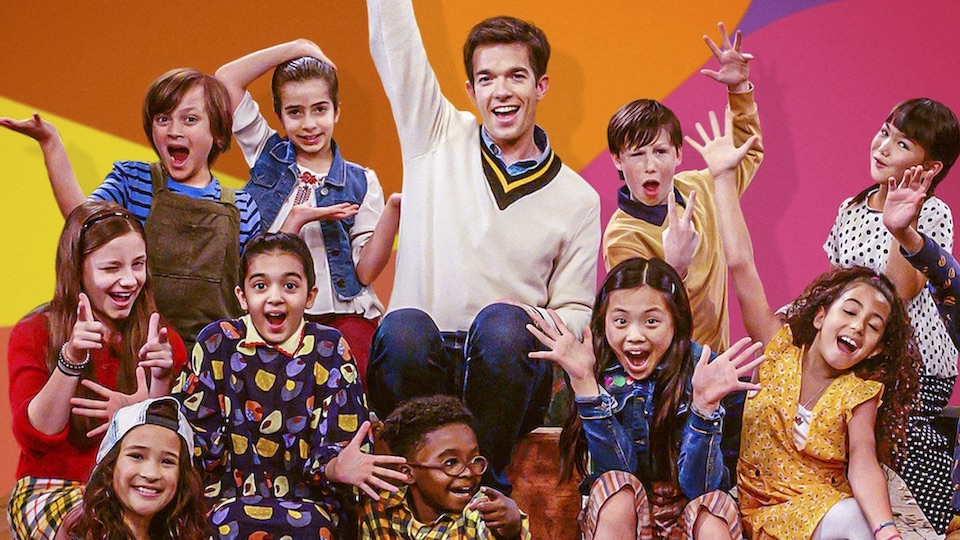 If you’re of a certain age, you’ll recall shows like The Electric Company and 3-2-1-Contact which not only attempted to teach but also entertain you. Children appeared with A-list stars like Morgan Freeman, Rita Moreno, even Carol Burnett and Mel Brooks. These were the hipper versions of Sesame Street that also included catchy songs that taught grammar, science or math – or just showed us the veritable coolness of Easy Reader (Morgan Freeman). In a loving spoof of these memories, John Mulaney has pulled together a young cast and an eclectic group of guest stars for the quirky John Mulaney and The Sack Lunch Bunch to remind us how endearing (and silly) these shows were.

The one-hour Netflix show was conceived by Mulaney and co-written with Emmy-nominated SNL writer Marika Sawyer. Recall that Mulaney was also a writer for SNL and worked with Sawyer for a number of years.  To make sure the music was catchy, Mulaney recruited Sesame Street composer Eli Bolin.

The Sack Lunch Bunch is a series of discussions that Mulaney has with the fifteen youngsters that make up the “Sack Lunch Bunch Kids.”  The show starts with a quote attributed to Erika Jayne from The Real Housewives of Beverly Hills that reads “Do you know who tells the truth? Drunks and children.” Mulaney and his young co-stars assemble in a courtyard behind a public building, akin to a set on Sesame Street. He then explains the premise which is followed by one of the children immediately asking Mulaney, “What’s the tone of this show?” followed by another child asking, “Is it ironic or do you like doing a children’s show?” Mulaney stammers a bit and explains that if it doesn’t turn out great, then it was meant to be ironic, but if it goes well, they can explain how hard they worked on the show and act humble about it – which leads to his first “Lesson”: “You can go very far in life if you pretend to know what you’re doing.” And that sets the tone of the show; lighthearted and caring, with a solid dose of absurdism.

Related: “‘The Morning Show’: A Not So Cheery Wake Up Call”

The episode is a mix of skits that provide various life lessons and adds cut scenes with quizzes that ask you to spot the differences between two completely different images, or to sort this list of former New York mayors – all set to throwback graphics.   Mostly The Sack Lunch Bunch is comprised of musical numbers, that include a lengthy but catchy song called “Grandma’s Got a Boyfriend” where a young teenager sings specific details about Grandma’s boyfriend “Paul”, who no one in the family appears to care for. Another segment is titled “Hey, What Are You Reading?” where another child actor reviews a kid’s book called Sascha’s Dad Does Drag. The review is done in earnest without social commentary or sarcasm.

The most endearing parts of the show are where Mulaney asks the kids questions like “What is one of your biggest fears?” and the answers you hear are unscripted, funny and a bit cringy. Some are scared of specific things like “pigeons” and others reply “not taking enough risks” and “home invasions”, clearly influenced by their parents.

Broadway stars André De Shields (The Full Monty) and Annaleigh Ashford (Kinky Boots) each do a segment, De Shields on having a math tutor and Ashford about a strange woman that another child sees crying on a New York street.  There’s a very specific musical number about another child’s love for plain noodles with a little bit of butter, and a segment called “Girl Talk with Richard Kind”, a character actor you’ll recognize from Curb Your Enthusiasm who’s clearly not qualified to have such a discussion. David Byrne appears in two segments, the first to sing a Talking Heads-style duet with youngster Lexi who is being ignored at her parent’s party. The most amusing bit has Jake Gyllenhaal sing and dance to a lengthy and elaborate song that suggests that “there is music everywhere.”

Overall, Mulaney clearly put a lot of care into the show to make sure that the adults are the ones who seem foolish and not the children.   The Sack Lunch Bunch may be relegated to one show or given the positive reviews it’s garnered, it may have a sequel. In either case, it is definitely worth your time.