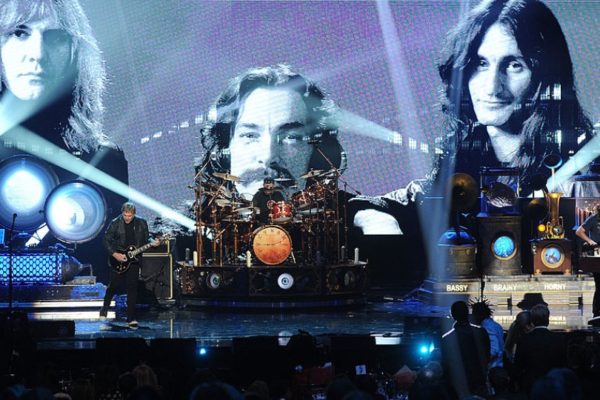 Of the many 70s progressive rock bands that did conceptual works about pigs, knights and Siddharthian self-discovery, there were two that transitioned to 80s stadium pop with ease. They were Genesis and Rush, two power trios that had decided by 1980 to explore a more radio-friendly terrain. Between them, the bands amassed millions in album sales and earned induction into the Rock and Roll Hall of Fame (2010 and 2013 respectively). They were choppy, intelligent and lyrical, placing great importance on their drummers. For Genesis, Phil Collins doubled as drummer and singer. For Rush, the late Neil Peart doubled as drummer and primary songwriter.

Related: “Symphonic Metal: The Beauty of the Beast”

Peart, a voracious reader, was the obvious candidate to write the band’s lyrics, leaving Rush co-frontmen Geddy Lee and Alex Lifeson to work on the trio’s music. Permanent Waves (celebrating its 40th anniversary this year) showed a slicker, more polished sound, though Peart assured Billboard magazine that the decision had artful, rather than economic, reasons. “One LP can’t define a trend,” he admitted. “… In this case, most ideas were on a smaller scale. It wasn’t a bid to be more commercial.” Throwing themselves completely into the more palatable, Lee lowered his falsetto, Lifeson tightened the guitar work and Peart conceded that a song about Sir Gawain and The Green Knight wouldn’t fit the more contemporary feel of the album. Having recorded their most recent work in Britain, Rush returned to their native Canada to produce their seventh album. Changing scenery, changing direction, the band experimented with genres as atypical as reggae.

Permanent Waves is a belter, opening with the startling “The Spirit of The Radio.” One of the band’s most fondly remembered works, the band tips their hats to a local Toronto radio station, with the song boasting Erwig Chaupchuaduah on steel drums. Session pianist Hugh Syme contributes to “Different Strings,” where the other keyboard parts are Lee’s doing. Lifeson works through the pummeling “Freewill,” a jangly rocker that serves as both a libertarian salute and dance track. Then there’s Peart’s exhilarating drumming on “Jacob’s Ladder,” a multi-faceted work that incorporates impressive time changes. Though the group was heading in a more conventional direction at the time, shades of past works are still heard in the mix, most apparently on the monstrous closer “Natural Science.” A three-part mini-suite, the sprawling rocker veers inward and outward over an expansive nine minutes. Divided into three distinct sections, the song’s watery effect crept in when producer Terry Brown recorded himself and assistant Kim Bickerdike splashing oars in a residual lake. Furthering the watery metaphors, Peart came up with the title after discussing “cultural waves” with bassist Lee, deciding that “a big album was like a permanent wave.”

And the songs stuck in the band set-list – permanently. Embarking on an adventurous six-month tour, the band experimented with all the available possibilities arena performances offered them. Luminous magnesium flares, crackling explosive lights, and space-filled rear projections were just some of the many visual treats Permanent Waves explored in concert. For its time, it was Rush’s highest-charting album, hitting the #4 spot on the US charts. “Entre Nous” delighted audiences in 2007 when the band aired it onstage for the first time. Returning to the stadiums in 2015 for the R40 tour, “The Spirit of The Radio,” “Jacob’s Ladder” and “Natural Sciences” were among the most popular songs performed. The album still holds up as a stadium rock record. “We’re all developing all the time and Permanent Waves is the result of our continued growth” Lifeson noted in 1980. “We may try new things to stimulate us but we’re not going to make major changes for the sake of making changes.”

For a progressive band, whose past resume included vignettes of Ayn Rand’s prose, turning to more conventional territories was a daring — and successful — move.