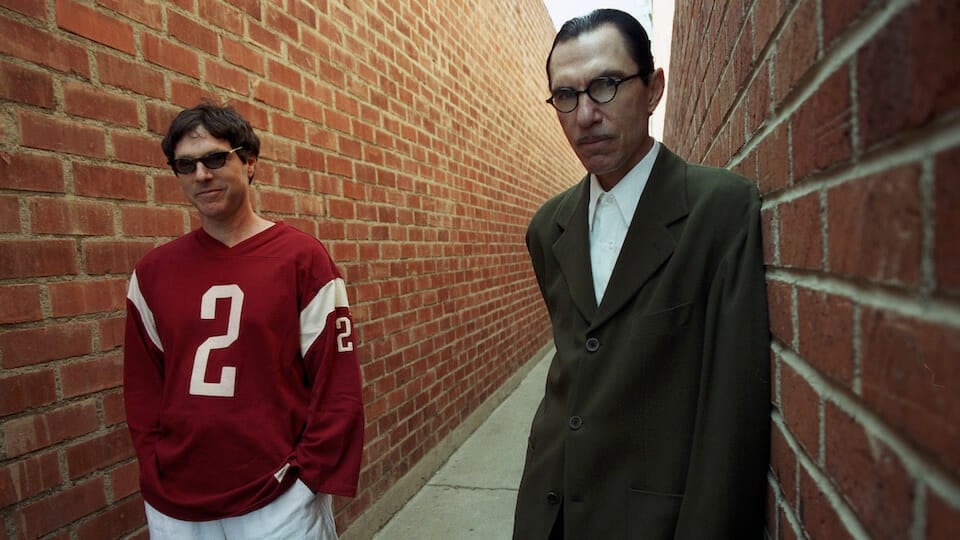 Edgar Wright is a British director steeped in American cinema; Sparks are an American musical outfit steeped in whimsical British pop; and together they’ve created one of the most idiosyncratic, and certainly one of the more inventive, musical documentaries of the last thirty years. The Sparks Brothers showcases the duo’s expansive trajectory through a series of close cuts, animated segues, and a kaleidoscopic segment cut from the steamier twenties. But between the pyrotechnics stand two brothers, still as eager to collaborate on their next musical venture as they were fifty years before.

Russell Mael was the voice of the band, with confidence that married Freddie Mercury’s flamboyance with Robert Plant’s raw masculinity. And then there was Ron, all Hitler mustache and keyboards, who wrote the rollicking “This Town Ain’t Big Enough For The Both of Us” in 1974. With their bouffant hair, disembodied yowls, and penchant for vibration, the pair were a natural shoo-in for European audiences clamoring for Glam Rock. John Lennon loved their work and later convinced Ringo to give them a try. Their work proved the imprint to British rockers Duran Duran and Franz Ferdinand; even Paul McCartney saluted the act in the “Coming Up” video.

But that’s not to say that they were without their American fans, as Saturday Night Live favorites Mike Myers and Fred Armisen are quick to address. Flea, ubiquitous as ever, also turns up, hailing the weirdness of the pair in a career fifty years running.

Wright, whose previous efforts have ranged from the deeply unsettling (Shaun of The Dead, The World’s End) to the uproariously funny (Hot Fuzz, Scott Pilgrim Vs The World), finds himself unearthing the schoolboy that led him to discover rock music in his relative infancy. Despite Sparks as critical darlings, they remain an anomaly among most. Incredibly, Sparks have never been the subject of a documentary, despite the imprint they left on David Bowie producer Tony Visconti, or the wonderful efforts they cut with pop producer Giorgio Moroder. But neither Russell nor Ron seem too fussed about the attention (or lack of), but regale in the work that brought us such treasures as “Beat The Clock”, “Number One Song In Heaven” and “Cool Places.” “Throughout all the years that I’ve been making music,” says singer/songwriter Beck, “…eventually the conversation will go to Sparks.”

At 140 minutes long, the film is a little testing for novices, but at this point in their career, neither Wright nor Sparks have any need to pander to newcomers. In some ways, the uncompromising nature is in keeping with Sparks’ modus operandi. As committed to their craft as they are to their image, the Mael siblings are surprisingly hushed about their private lives. How did Russell feel about Ron’s mustache? Was Ron jealous of Russell’s genuine sex appeal? Your guess is as good as ours, but the film takes a somber turn when it recalls how their father, an artist who steered their great love for art, died when Ron was merely eight years old.

It would be remiss of us not to credit Wright’s taut editing style, chopping through interview segments before the necessary color is added. His most effective interjections might be the most straightforward, focused as he is on the titular characters. And for all their colorful tropes, stage trickery, and clever use of melody, the pair seem just as interesting on camera as they are off it.