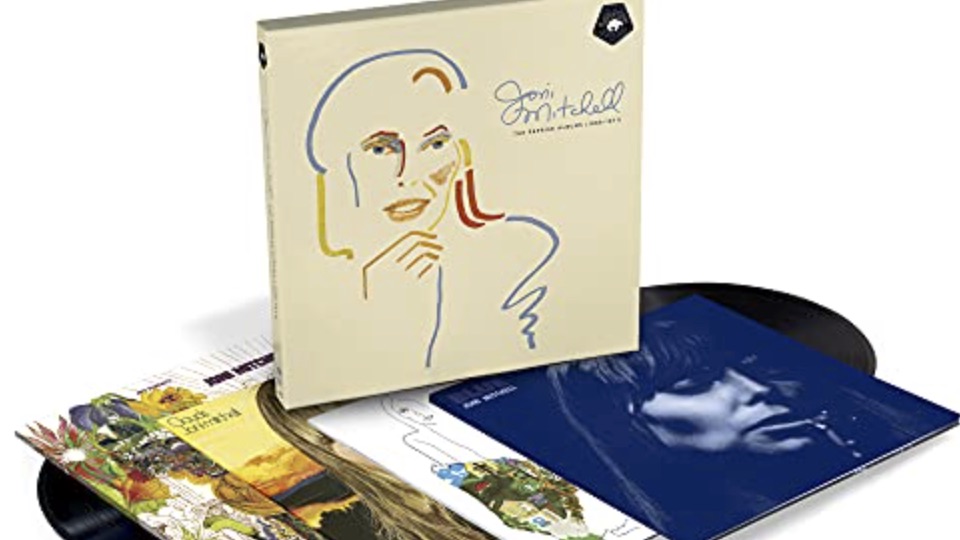 The next installment of Joni Mitchell’s archival series, Joni Mitchell: The Reprise Albums (1968-1971), is out via Rhino and features newly remastered versions of Mitchell’s first four albums: Song to a Seagull (1968), Clouds (1969), Ladies of the Canyon (1970) and Blue (1971). Accompanied by liner notes from singer-songwriter Brandi Carlile, the collection will be available as a 4-CD set, a limited-edition 4-LP 180-gram vinyl set, and on digital platforms.

Beginning with her debut album, Song to a Seagull, which was originally produced by David Crosby, the remasters offer a crisper listening experience.

“The original mix was atrocious,” Mitchell said of Song to a Seagull in a statement, who worked alongside audio engineer Matt Lee for this new release. “It sounded like it was recorded under a jello bowl, so I fixed it!”

For many musicians, revisiting their past work can be an exercise in diligence and self-reflection. Mitchell, notably, is her own most selective critic, an attitude that might explain why she left some of her best songs off her first albums. Tracks like “Both Sides, Now,” “Circle Game” and “Big Yellow Taxi” were written prior to the release of Song to a Seagull, but were not included until later albums. Yet, for Mitchell’s biographer, David Yaffe, imagining her freshman album as anything other than what it is feels impossible.

“I wouldn’t change a thing on that record,” he said in a phone interview, “except, of course, the way it was mastered.”

“It’s an astonishing album,” he continued. His biography of Mitchell, Reckless Daughter: A Portrait of Joni Mitchell was released in 2017. “I teach songs from that album, and there’s still so much beauty and wonder and mystery and magic.”

Among the reissued albums is perhaps Mitchell’s most enduring testament to her legacy as a  singer-songwriter, 1971’s Blue, which just marked its 50th anniversary. Ahead of the release, the remastered version of “A Case of You” is available for listening.

“I was opened up,” Mitchell said of the album in a 1990 interview. “As a matter of fact, we had to close the doors and lock them while I recorded [Blue], because I was in a state of mind that in this culture would be called a nervous breakdown.”

That vulnerable but resilient state of mind has since been praised across a wide spectrum of artists from Prince to Taylor Swift, and Blue is consistently touted as one of the most stirring, emotive albums of all time.

“In my opinion, Blue is the greatest album ever made,” Carlile wrote in the liner notes for the new release. “Blue didn’t make me a better songwriter. Blue made me a better woman…No matter what we are dealing with in these times we can rejoice and know that of all the ages we could have lived through, we lived in the time of Joni Mitchell.”

The cover art for the upcoming box set also features a self-portrait by Mitchell. You can pre-order Joni Mitchell: The Reprise Albums (1968-1971) here.