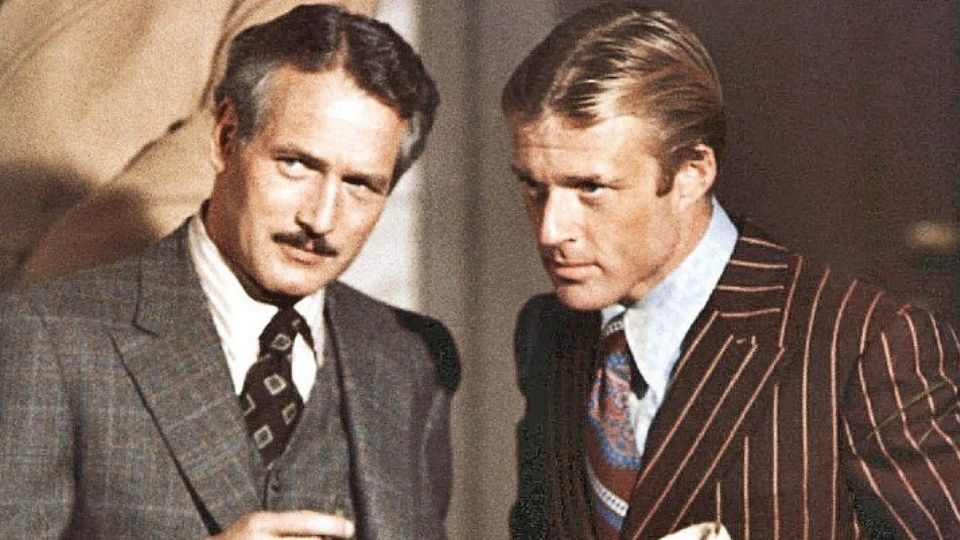 Director George Roy Hill’s piece of cinematic genius The Sting (starring Paul Newman and Robert Redford) cleaned up almost as handsomely as its two leading men at the 1974 Academy Awards. It was nominated for ten Oscars and walked away with seven, including Best Movie and Best Director. A witty nail-biter of a caper film, it blows the mind with clever convolution as it caresses the eye with gorgeous vintage sets and costumes. It’s movie-making perfection that deserves the fandom of subsequent generations.

The Sting begins in a bleak alleyway in 1936 Joliet, Illinois, where either a crime or a Good Samaritan act is taking place. It turns out to be far more complex than either, and we grow enraptured as the intensely thick plot spins out.

There’s no sense in unspooling all the madness, but in a nutshell, The Sting is a movie about two spirited grifters, Henry Gondorff and Johnny Hooker (Newman and Redford respectively), who team up to play a devastating and risky “long con” on Doyle Lonnegan (Robert Shaw). Lonnegan is an evil, soul-free crime boss who had a dear friend of theirs killed.

Newman and Redford, in their second (and sadly last) co-starring appearance after Butch Cassidy and the Sundance Kid are a movie twosome for the ages. They exude a vibe of mutual respect and soulmate-hood. Scammers, sure. But gentlemen of wisdom and adaptability who reek of the proverbial honor among thieves.

The plot is a thick soup of grifting, card cheating, payback, horse racing, a moronic detective, misrepresentation, bad-ass chases, and a fantastic game. When Gondorff (the world-weary con man) strategizes with Hooker, their blend of brains, charisma, and moxie make for an unbeatable force. In their quest to pull one last con on the murderous Lonnegan, they assemble an army of compatriots, ready to suit up and get revenge on their despicable nemesis. In public, the merry justice-seekers utilize a delicious hand gesture (a finger subtly flicked across the nose) to acknowledge their secret mission.

Nothing goes remotely as planned, of course, and the plot switcheroos are so many that the film needs to be scrutinized over and over. Every viewing brings fresh nuances and observations, and never ceases to entertain.

The period sets are a spectacular dreamscape of Depression-era Chicago. Iconic costume designer Edith Head suited everyone in perfect duds. And the theme music…oh, that theme music. George Roy Hill had the idea to score The Sting almost entirely to Scott Joplin.

Joplin created ragtime, a syncopated and elegant form of piano music from the turn of the 20th Century. This might not seem to align with the grim Depression scenarios of the mid-1930s, but never before has an anachronistic musical score elevated and defined a movie as this one has. Marvin Hamlisch’s adaptations of Joplin’s music were spot-on for the mood of the movie and he won a deserved Oscar for his efforts. The Sting single-handedly re-popularized Joplin’s lyrical rags almost 60 years after his death.

The masterful twists of plot and expectations, the stellar performances, the visual/aural appeal, and air of building excitement would all seem to be an adequate formula for a blockbuster movie. And so it is. But The Sting is far more than that. It is the ultimate male buddy movie with a charismatic cast of co-stars. And despite the fact that everyone involved sports a rap sheet and a little roughness around the edges, it is an oddly moral movie. The “good guys” may be con artists, but they also possess honor and loyalty. Their desire to financially take down the vicious bigwig (Robert Shaw’s performance is a thing of chilling beauty) becomes an ode to fairness, fellowship, and fist-pumping triumph. The Sting is, in short, the ultimate feel-good hustle movie.

6 comments on ““The Sting” – An Appreciation of the Long Con”