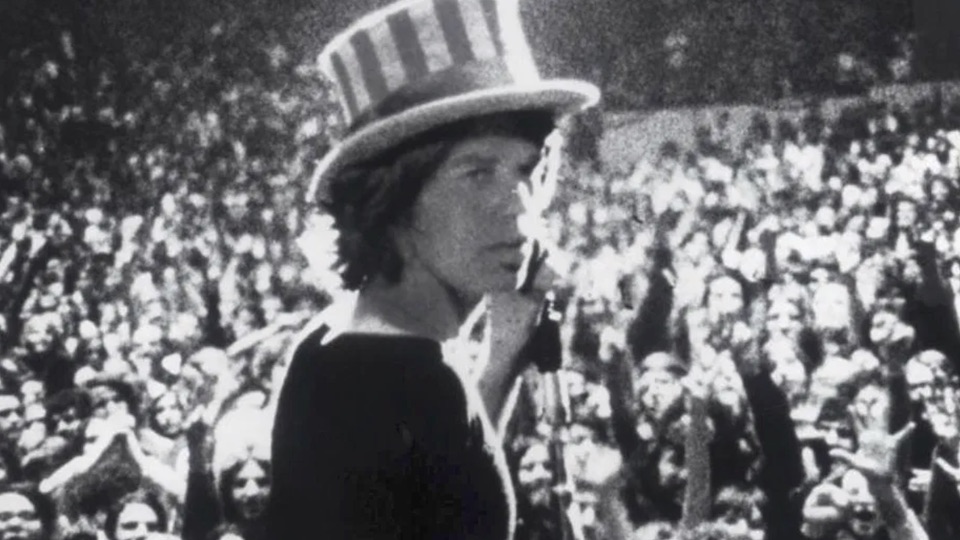 Rock fans know that the Altamont Speedway Free Festival (also referred to simply as “Altamont”) of December 6, 1969, was one of the darkest moments in rock history. Meant to be a “West Coast Woodstock” – with a free performance by The Rolling Stones as they wrapped their big American tour – it devolved into chaos and violence. Terrible planning, lots of harsh drugs, and the presence of the zonked-out Hell’s Angels marked the event as what some have called “the death of the 60s.”

The Maysles Brothers captured much of it in their classic concert film, Gimme Shelter. However, there were still photographers present as well. Photographer Jeff Hochberg recently stumbled on some never-before-seen original 35mm slides from the performance. They capture some other angles (literally) of a moment that rattled The Stones (they rarely discuss it in interviews) – and the rock world in general.  In an interview, Jeff shares how he came upon these rare finds.

CS: Tell us about being a seeker of photo negatives. How did you get into this?

JH: Long story short, I’m totally enamored with the idea that the physical acetate was there in the presence of the subject matter.

I started collecting vintage concert posters in high school and eventually moved on to fine art rock photography. Like many committed collectors, I’ve spent a lot of time rummaging through dusty boxes, in out-of-the-way places, to find things that may not ever have seen the light of day. It’s time-consuming, but really rewarding when you track down something really noteworthy, like these Altamont negatives.

CS: What are some of your favorite finds thus far?

JH: I really love this Altamont set.  Well-preserved, vivid color images of the Stones and the Hells Angels at a pivotal moment in the history of rock, taken by someone who had real access and a great eye.

Besides this, it’s the Ross Marino archives and the work of my now-friend Bernie Walters.  Ross was one of the go-to guys in Detroit in the late ‘70s and ‘80s who unfortunately died in ’88. He worked with everyone who came through Detroit, shooting both live and doing tons of portraits.  Bernie was a diehard rock fan in the ‘60s and would bring his camera to every show.  He captured the Stones, The Who, and Cream on their first tours of the US.  Always front row and in color.

CS: What was it like, first looking at these images? How did it feel for you as a person and a photographer?

JH: I didn’t even realize what I was scanning at first.  When I saw the first images, I was blown away. There aren’t many great images that exist from Altamont that include both the Stones and the Angels.  The perspective from the stage gives you a real sense of the mayhem at Altamont.  Hundreds of thousands of fans packed right up to the 4’ high stage.  People leaning on their elbows on the stage; Hell’s Angels walking in front of the band mid-song; their bikes right in the middle of the crowd; the dog that we’ve seen in Gimme Shelter just casually walking in front of Mick Jagger.

It’s insanity. In a few frames, you can see the Angels standing in front of Keith and Bill Wyman, leaning into the audience, right as Meredith Hunter is stabbed, pulling his body onto the stage.

CS: Which of these Altamont images are most striking, emotional for you? Why?

JH: In one of the images, where they’re clearly dealing with what turned out to be the stabbing of Meredith Hunter, Mick Jagger is looking over as Hell’s Angels are dealing with fans who are trying to lift Hunter’s body on to the stage. Mick Taylor is in the foreground playing his red Gibson SG, seemingly oblivious to what’s happening in front of the rest of the band.

That image, and the few that show the dog moseying across the stage, without a care in the world nor an appreciation for his own perspective!

CS: What are some “lost treasures” you’d like to find (events, artists, etc.)?

JH: There are so many. Any iconic moment in history really. Within music, early Dylan or Dylan and The Band in Woodstock, the Beatles in Japan, or in the studio.  Candid images taken at intimate moments are always great, whether it’s on a tour bus, checking into a hotel, candid moments of solitude, etc.

Outside of music, anything counterculture, whether it’s the Beat Generation, Black Panthers, the Yippies, etc.  Just as long as it’s the original film and ideally comes from the original photographer.

Editor’s Note: Check out these amazing new finds around one of the pivotal moments in rock history.