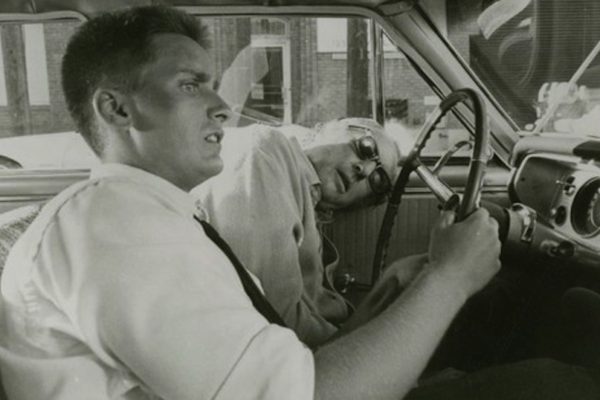 Eighties youth culture was fast, neon-colored, composed of squiggles on grids and music as video. It also came with its own generation of young actors, led notably by filmmaker John Hughes. With their names above the title, Emilio Estevez, Anthony Michael Hall, Rob Lowe, Andrew McCarthy, Demi Moore, Judd Nelson, Molly Ringwald, and Ally Sheedy became known collectively as The Brat Pack. Like The Rat Pack of the 1960s led by Frank Sinatra, Dean Martin, and Sammy Davis, Jr., the “brats” were both a product and an emblem of their time. Here are five films that embody the style, which arguably is also the substance, of The Brat Pack.

Leggy as a fashion model and just as adept at navigating complexities, Molly Ringwald was the true breakout of the group. The star of John Hughes’ three cornerstone films of the day, she shines brightest in Pretty in Pink — also the best of the three films (the cult of The Breakfast Club notwithstanding). That’s because Pretty in Pink deals most honestly with the heart and soul of high school. No other actress could deliver the incandescence of a promising child from the wrong side of the tracks, vulnerable to the attacks of mean kids, wise in caring for her troublesome dad. Jon Cryer comes close, though, as the proto-goofy ‘80s guy gliding in on a skateboard, wearing a black duster, hopelessly in love. By the time the de rigueur prom scene arrives to close the yearbook on 1986, Pretty in Pink has established itself as the teenage movie of its generation.

The brattiest packer was not an actor but a writer: Bret Easton Ellis who gave a generational voice to spoiled rich kids from Beverly Hills. Less Than Zero is a peculiar tale about reprehensible kids behaving badly in the shadow of privilege. And if Andrew McCarthy as the sensitive collegiate home for the holidays isn’t quite up to anchoring the movie adaptation of the book, he’s curiously adept at playing a character bereft of soul. That soullessness, drenched in ‘80s high-concept design, creates the high water mark for eighties shallowness. In another era, Less Than Zero could be an Antonioni film: You can no more lift Less Than Zero from day-glo 1980s LA than you can Blow Up from mod ‘60s London.

The only truly critically-acclaimed film starring a Brat Packer is Repo Man. Emilio Estevez’s feisty screen presence gifts this cult hit with both hot action sequences and hotwired humor. Repo Man‘s Los Angeles is punky and gritty, a counterpoint to Less Than Zero‘s vulgar ennui. This is a land where losing your wheels equates to an identity crisis. That’s the key to Repo Man: Identity is transient, literally on wheels being taken away, but the crisis turns out to be interstellar. Repo Man is wacky, smart, and punk, not just the key that unlocks the door for the Brat Pack era but the engine that provides its thrum.

If audiences love to see anything, it’s groups of friends toughing it out through life, and that is the crux of St. Elmo’s Fire. Joel Schumacher’s study of style-as-substance follows a cluster of friends freshly graduated from Georgetown University. Each is a “type”  – go-getter, party girl, nice girl, sensitive boy, screw-up, etc. – but as twerpy and self-involved as they are (literally, a pack of brats), the soap opera in which they exist allows both the actors and art directors space for over-the-top excellence. Each actor gets a chance to shine, and some moments – notably the love scenes and the closing ceremony – are genuinely lovely. If you weren’t there, St. Elmo’s Fire is probably an object of kitsch, but if you were, it’s more likely a fetish.

The leaden Fresh Horses and unrecognizable About Last Night notwithstanding, the best of the brat pack dramedies is Class, because it delivers the lightest touch. The film oscillates around a love triangle of Rob Lowe, Andrew McCarthy, and Jacqueline Bisset, with Bisset playing – ooh la la – one of the boy’s mothers. Bisset is almost always better than the material she works with, and both Lowe and McCarthy deftly use their charms to point out their sensitivities. Class collapses like the souffle’ it tries to be because fluff cannot support weight. But in its mall-Saturday agreeability, it captures the awkwardness of being teenager, with a charm approaching the John Hughes standard. Class isn’t nutritious and to some it won ‘t even be tasty, but it is as affable as hot buttered popcorn and a fountain cola.

0 comments on “Five Films: The Style and Substance of The Brat Pack”