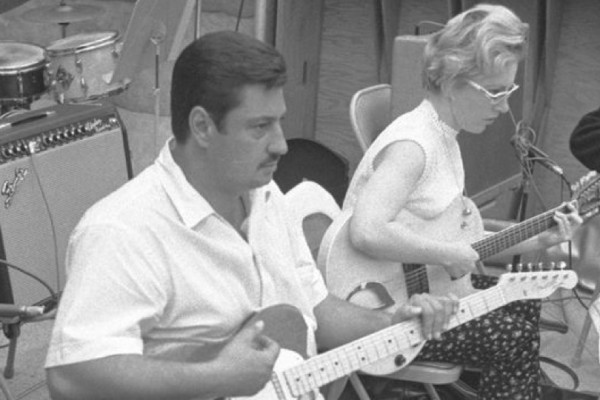 There are always key people behind hit records. Max Martin, for example, is on a helluva roll right now. He produced, or co-produced, 3 of the last year’s top 10 singles, and helped craft Taylor Swift’s massive 1989. As a songwriter, he has eighteen #1’s, putting him behind only these two guys from Liverpool. Many people recognize Martin’s name; and more-or-less understand the impact he’s had on modern music.

“The Wrecking Crew,” on the other hand, put its fingerprints on hundreds of hits; but almost no one knew who they were. The basically-anonymous group of monster studio musicians ruled pop music from the mid 60’s through the early 70’s, playing on hits for the Beach Boys, Frank and Nancy Sinatra, Sonny and Cher, Jan & Dean, The Monkees, Mamas and Papas, Tijuana Brass, Ricky Nelson, Johnny Rivers and many, many others. They were Phil Spector’s vaunted “Wall of Sound” (and are also portrayed, admiringly, in Love and Mercy, the recent Brian Wilson biopic).

Musicians revere the Crew – both for their prodigious chops (guitarist Tommy Tedesco was arguably the greatest sight-reader who ever lived) and for their taste. They transformed many lightweight tunes into sonic masterpieces. A recent documentary gives the Crew its due. Willed into life by Tedesco’s son Denny, who endured years of financial mountain climbing to get it made, the film is an entertaining behind-the-scenes look into mid-century hit-making – and absolute musical mastery. Truth be told, it is more a love letter from Denny to his dad and the Crew than a cinematic achievement; but there is no denying the genius within.

Other, more finely crafted, docs cover similar territory. The Swampers were the house band at FAME studios in Muscle Shoals, Alabama in the 60’s and 70’s. The funky, soulful, greasy sound they created powered hits like I’ll Take You There, Brown Sugar and When a Man Loves a Woman. Founder Rick Hall brought black and white together, no easy task in Alabama at the time, to cook up something wonderful and enduring. Muscle Shoals, the 2013 film, does these fantastic players proud.

Perhaps the best of the ilk is 2002’s Standing in the Shadows of Motown. It profiles The Funk Brothers, the label’s sublime house band. Jazz cats who brought melodic, harmonic and rhythmic sophistication to dozens of huge pop hits, the Funk Brothers are also great storytellers. The film gives them time and space both to speak and play. The reunion concert that anchors the film only improves with repeated viewing.

All three films are suitable tributes to some timelessly-excellent music and the players that made it.  Enjoy!

And while we’re on the topic of great musicians, here are some other posts you might enjoy: That’s My Jam!; Why Does No One Record Squeeze’s Songs? and Don’t Like Country Music? Think Again.

20 comments on “These Guys Were REALLY Behind the Music”