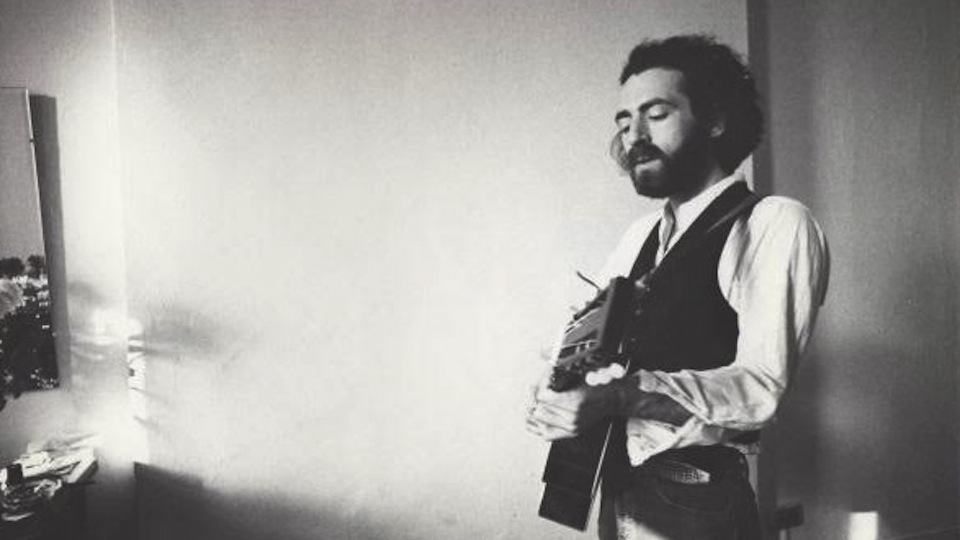 For decades, singer/songwriter Jay Bolotin’s self-titled 1970 album represented the entirety of his recorded legacy. That legacy has recently been expanded by the arrival of No One Seems To Notice That It’s Raining, a collection of previously unreleased tracks from 1970 to 1975. “I really never mentioned that record to anybody in Nashville,” says Bolotin in a soft Kentucky accent, coming off like a retiring Southern gentleman. “It had a sense of juvenilia,” he says of the record he made when he was no more than 18, before adding in a courtly manner, “no disrespect to that young man, but you know what I mean.”

Bolotin, descended of Jewish cattle dealers from Alsace-Lorraine, grew up on a farm outside of Lexington, Kentucky, and was attending the Rhode Island School of Design in the late ’60s when he started performing his own songs. He met a couple of producers who invited the teenaged folk balladeer to come to New York to make a record. Bolotin cut his debut at renowned producer Brooks Arthur’s Century Sound Studios, where Arthur engineered Van Morrison’s Astral Weeks around the same time.

In retrospect, Bolotin’s precocious debut would not have fared worse had it been the character in a horror movie who ill-advisedly goes off alone to get help. “It was originally on ABC Paramount,” recounts Bolotin like a racecar driver calmly remembering a fiery smash-up, “and somehow they went out of business or moved to California, and a little label called Commonwealth United picked it up, and they folded about three weeks after they signed the record. So all that ever got out were some promo copies.”

By 1972 Bolotin had made his way to Nashville. He began to play at the recently opened Exit/In, soon to become a staple of Music City’s singer-songwriter scene. “There was John Hiatt,” remembers Bolotin, “there was Dan Fogelberg, they were all kids, as was I.” Legendary producer-musician Norbert Putnam took a shine to Bolotin’s songs. Putnam and his partner, renowned keyboardist David Briggs, signed Bolotin to their publishing company, Danor Music, for which he cut demos at their newly built Quadrafonic Studios, where Joan Baez cut her hit version of “The Night They Drove Old Dixie Down.”

Most of the tracks on No One Seems To Notice That It’s Raining come from those Danor demos, but unfortunately, not much else did — at least not at the time. “Eventually I met David Allen Coe,” remembers Bolotin, “and the outlaw country star recorded two of the Kentuckian’s tunes on his 1977 Tattoo album. “Eventually Porter Wagoner recorded one of my songs,” he recalls, “and then Dan Fogelberg.”

It wasn’t until ’85 that soft-rock star Fogelberg released High Country Snows, which contained the Bolotin songs “The Outlaw” and “Go Down Easy.” The latter made a big difference in Bolotin’s life, though its arrival was anything but expected. Back in ’72, Bolotin cut a Danor demo of the tune, one of a number of his demos that included accompaniment by his crony Fogelberg “I don’t know what happened,” he says, “I lost track of Dan, but he must have kept the tape, because he released it as a single.” Though it took a dozen years for the multi-Platinum hitmaker to record the song, its eventual release was no anticlimax. The single reached number six on the Adult Contemporary charts and the album went Gold, giving Bolotin’s fortunes a belated boost.

By that time, though, he had pretty much abandoned his music biz ambitions, successfully pursuing the visual arts instead. His ship had run aground in Nashville before the ’70s were over. It wasn’t for lack of esteemed supporters though, as he notes with characteristic decorum, “There were some lovely people that seemed to be aficionados of my songs: Mickey Newbury, and Kris Kristofferson, and Merle Haggard.” Ironically, that support ended up making things harder for him. “There was some article in the local paper,” Bolotin explains, shifting back into disaster-story mode, “I think Mickey Newbury called the people on Music Row idiots for not making a [Bolotin] record,” he laughs gently, “and afterwards, when I would meet someone on Music Row, they would introduce themselves as ‘one of those idiots on Music Row.'”

Later, Haggard would personally oversee the recording of a Bolotin album, but by now you can probably guess how that turned out. “He was quite a gentleman to me,” remembers Bolotin graciously. “But none of it ever made it through the business part of things.” Displaying his gift for diplomatic understatement, he offers, “The gulf between me and the music business was quite wide.”

At the end of the ’70s Bolotin moved to Cincinnati, where he still resides, and his career as a multi-media artist took off. He never stopped writing songs, but his only recorded output was an online-only batch of songs he made available in 2006. Unpredictably, three years later, his debut album’s Leonard Cohen-esque opening track, “Dear Father,” was including on archivist label Numero Group’s compilation Wayfaring Strangers: Lonesome Heroes. This inspired entrepreneur Dawson Prater to seek him out and reissue the record on his Locust Music imprint.

Bolotin remembers Sevier’s first phone call wryly, “He was talking really slow — ‘Is…this…Jay…Bolotin?’ He was saying, ‘Did you make a record in 1968?’ I said, ‘Yeah, you know you can just talk regular.’ I think he thought I was like 95 and drooling in my soup or something. I told him I made that when I was 17 or 18.”

It wasn’t long afterward that another avid archivist, Delmore Recording Society founder Mark Linn, entered the story. Linn had recently co-produced a collection of Kris Kristofferson’s early publishing demos. “He ran across my name several times when he was researching that,” says Bolotin, “because Kris had been supportive of my songs back then.” Possessed of an unnatural ability to sniff out seemingly lost recordings, Linn eventually uncovered the dusty tapes of Bolotin’s own Nashville demos, along with a couple of tracks from his unreleased second album. No One Seems to Notice That It’s Raining is the result.

Listening to Bolotin’s early-’70s output, it’s as unsurprising that his cause was taken up by Nashville’s most famous musical mavericks as it is that he was ignored by the Music City mainstream at the time. Like a few artists kicking around Nashville in that period (Chris Gantry, John Buck Wilkin, Lee Clayton.), Bolotin was a folk-rock troubadour in a country town. And back then, the borders were a lot tougher to break through.

Had he been abiding in L.A. or New York, Bolotin might have been right in tune with the singer-songwriter boom and found himself embraced (at least for an album or two) by the labels that hosted the likes of Jim Croce, Jackson Browne, and the aforementioned Leonard Cohen. Instead, he was swimming upstream, not even quite country enough for outlaw country. But the songs he crafted during that time still stand up proud and strong.

The new collection’s title track is a commentary on America’s Vietnam quagmire. “That pervaded a lot of things,” he says, “especially for young men. I was considering going to Canada, because I was against that war. But then they had that lottery and I think my number was 364 or something, I was never gonna get drafted.”

The darkly fanciful spoken-word tale “The Story of Lester and the Gold Coin” underlines Bolotin’s skills as a storyteller, which would eventually serve him well when he brought his multimedia artistry to theater pieces. “It’s Hard to Go Down Easy” is the original version of the song Dan Fogelberg brought to the charts with a truncated title much later, and it’s fascinating to hear how much of its initial feel survived along the way.

Looking back on those songs now, Bolotin says he’s “lived enough to look at it as though one is looking through a kaleidoscope,” but regarding the young man who cut those tunes, he allows once more, “I have great respect for that person.” Today he remains artistically active in multiple forms of media, lately concentrating on creating animated films.

Music remains a part of Bolotin’s life, but his reserve and humility seem to create a perfect storm that sinks any notion of spotlight-seeking. “I was never all that fond of recording, truthfully,” he confesses. “It seems like kind of catching something in amber that wants to live a different kind of life. There are some concerts planned,” he says, “It’s important to me to play live.” But he’s quick to add, “I can’t say I love it. But it seems almost like a challenge that I feel better if I have met. It’s kind of like hunting wooly mammoths or something.”