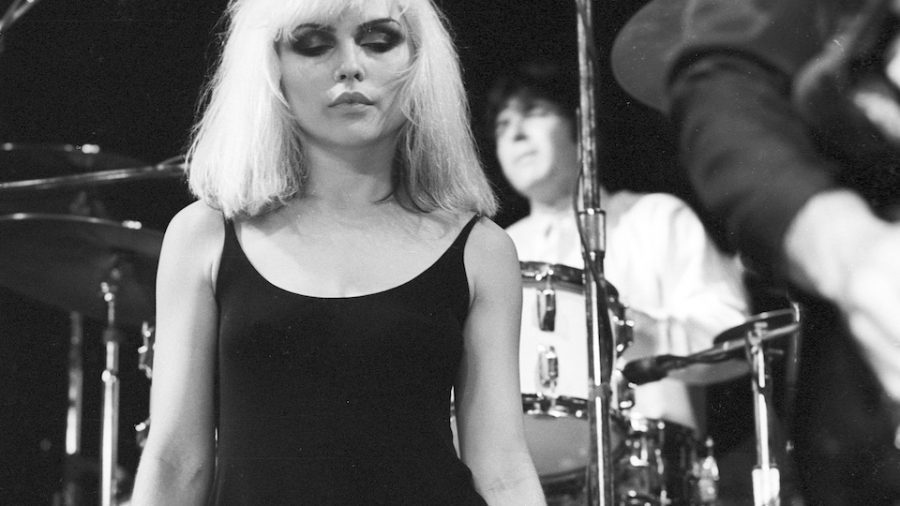 For over four decades, the impossibly cool, Hitchcock-worthy blonde Debbie Harry has delighted us as the lead singer of the seminal rock band Blondie. That she and her cohorts have been able to lift our spirits while surfing genres as varied as punk, funk, New Wave, pop, and disco is a testament to their incomparable talent. And while none of the songs from their rockin’ last album Pollinator (2017) made our top ten list below, one from their 2013 release Ghosts of Download sure as hell did. In short, you can’t blame the band for not beating its own impressive accomplishments.

An enormous chart-topper in the US, UK, and Canada, “Call Me” was also immortalized in the soundtrack for American Gigolo starring Richard Gere as a rent boy. As for the catchy movie theme, it was arguably better than the film itself and led to Grammy and Golden Globe nominations, something the film simply couldn’t get without it.

Times change. Hence this song off Blondie’s eponymous debut LP has respectfully updated its original title of “Sex Offender” to “X Offender.” Composed by bassist Gary Valentine as a dark tune about statutory rape, the lyrics got rejiggered by Harry to be about a prostitute sexually attracted to her arresting officer. The new spin works better considering it’s a stellar dance track.

An otherworldly confection from Blondie’s album Eat to the Beat, this best-selling single across the pond sounds like a variation of “Heart of Glass” after it was given, as Harry put it, “a spaghetti western treatment.” The video famously features the late supermodel Gia Carangi but no one can upstage Blondie’s frontwoman as she turns the word “atomic” into a free-floating term about power in its many forms.

Although she might not have as many lives as Cher, Harry has certainly had her fair share of comebacks, one of them courtesy of this fantastic track. (Blondie had not released a single since 1982!) From 1999’s No Exit, keyboardist Jimmy Destri’s ode to teen desire is as sexy as anything from Harry’s 1970s heyday even if even if she was 53 at the time of its release. “Maria” thrilled old fans and brought completely new ones on board.

A relatively recent entry care of Blondie’s 10th album Ghosts of Download, “Sugar on the Side” evaded radio rotation for reasons unknown. In her late 60s by this point, Harry is still embodying alluring hipness while giving a musical middle-finger to the man who done her wrong. It’s a rock-solid synth-pop tune infused with Latin-American influence and all kinds of attitude.

Co-writer Chris Stein called it “pretty much a cop” of ABBA’s “Dancing Queen.” We think it’s better than that. Plus the lyrics create their own form of dreaminess with a surreal narrative that owes nothing to its Swedish muse. A line like “Reel to reel is living verite“ is pure pop poetry plus there’s that earworm of a hook.

Featured on Autoamerican, this unique track mashes funk, hip hop, and disco. It’s also of some historical import: The first number one hit to contain a rap! Who else would rhyme “back to back” and “sacroiliac”? And that’s not even in the rapping section which concerns a particularly hungry Martian eating cars then bars. Oh, my stars!

Also from Autoamerican, this innovative cover originated in piano roll form in the 1930s then became a hit decades later thanks to The Paragons in the 1960s. You can count on Blondie to put their own spin by bringing in a spirited horn section and an unexpectedly reggae feel. Old-timey, this is not.

This song about a creepy stalker was based on real-life but Harry turned her anger into art by channeling her dark wit and playful intensity. From 1978’s Parallel Lines, this crossover track placed Blondie firmly into pop’s pantheon of Rock Gods. The song has also repeatedly been sampled in movies as different as Little Darlings (1980) and Ready Player One (2018).

The best song off their best album was called “Once I Had a Love” in demo form but was rebranded, revamped, then released. The band caught some flak from New Waves who missed the group’s punk edge but “Heart of Glass” has stood the test of time — a “love gone wrong” tune as vintage as the New York City skyline in its accompanying video.

6 comments on “Rapture Ahead: The Top 10 Songs of Blondie”