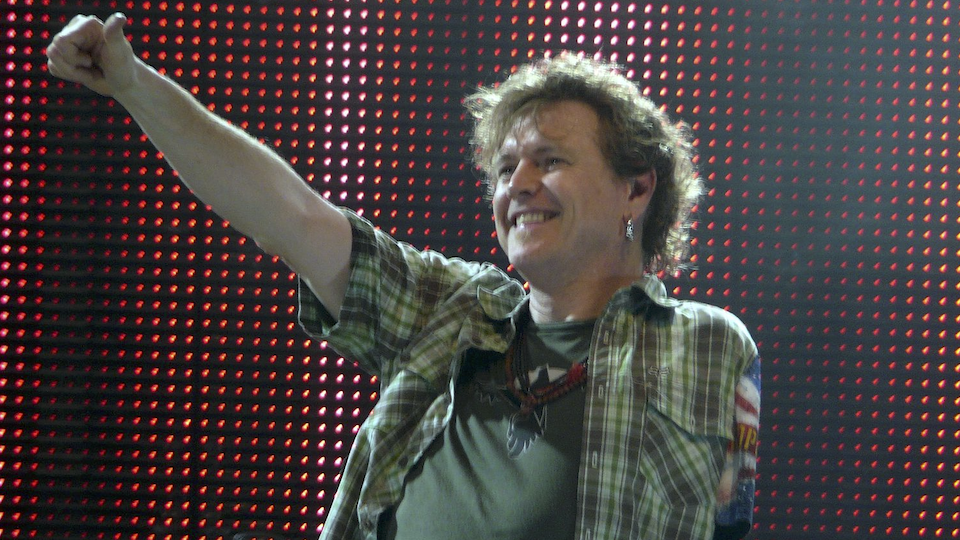 The sardonic lyrics and title to Dave Edmunds’ tune “Crawling from the Wreckage” sadly foretold Rick Allen’s horrifying car crash: “Cause when I’m disconnected from the driving wheel, I’m only half the man I should be.”

In 2021, Def Leppard’s drummer recalled his 1984 accident: “I lost control and as the car rolled, the seat belt came undone and took my left arm.  The arm stayed in the car and I disappeared through the sunroof and ended up probably 150 yards away in a field. I was in a hospital and in a coma for two weeks.  When they changed my dressing for the first time, they gave me tons of nitrous oxide.  It was then in this cartoon state that I realized, ‘Oh dear, I actually lost my left arm.’” The loss didn’t stop the determined Allen from quitting his job, making him the second rock drummer to play on multiple hits despite having one hand.

The first one-hander was Victor “Moulty” Moulton of the Barbarians who had his left hand blown off when he was 14 from a pipe bomb he tried to build.  He resiliently compensated for his loss by attaching a drumstick to his metal hook.

These days, he is mostly remembered for the Ramones name-checking him in “Do You Remember Rock ‘n’ Roll Radio?” (“Will you remember Jerry Lee, John Lennon, T. Rex and old Moulty?”) and for being in arguably the greatest concert movie, The Tami Show; where he and his fellow long-haired bandmates were introduced with: “Now, all the way from their caves in old Cape Cod, the Barbarians!”

After having a #55 hit in 1965 with a song title that would raise some hackles these days called “Are You a Boy or a Girl?,” the Barbarians barely hit paydirt and the charts (#90) the next year with an autobiographical ditty imaginatively named “Moulty.”  With backing from a group called the Hawks, who later became The Band, Moulty tells his explosive tale and how he persevered after his hand was severed; exhorting all to “keep on trying.” However, the original Barbarians didn’t practice what their drummer preached and disbanded when their songs didn’t have what Moulty wore: a great hook.

Unfortunately, Moulty wasn’t the only musician who became short-handed.  The Grateful Dead’s Jerry Garcia lost most of the middle finger on his right hand as a five-year-old when an axe held by his brother “Tiff” (Clifford) chopped most of it off instead of the wood Tiff believed his baby brother was holding.  Jerry kept on trucking and as a child, would show off his half-finger in his school to elicit “ewwwws” from his classmates.

He even used this injury as a prop in a hilarious skit with Al Franken that was played during the intermission of the Dead’s Halloween show at New York’s Radio City Music Hall in 1980 and was simulcast on closed-circuit television to fourteen theaters across America.  Franken solemnly told viewers to give money to a special fund for Deadheads who desperately needed an influx of cash so they could continue to stalk, uh, follow the group.  As an added bonus to give to the needy, Jerry revealed that he had kept his dearly departed finger in ice for 33 years but would hand it over to whoever donated the most money to the mock fund called “Jerry’s Kids.”

It was never known if Franken and Garcia reached their monetary goal, just as it will be never known if Garcia actually played better because he had nine functioning fingers and not ten.

In guitarist (Black Sabbath’s) Tony Iommi’s case, he lost pieces of his ring and middle digits on his right hand but the world gained heavy metal. Tony’s accident occurred on what his employer knew would be his last day working in a sheet metal factory because he was about to embark on his first tour with a band.  Sadly, Tony’s hand got in the way of what he called “a guillotine press.”  In a 2020 interview with GibsonTV, he stated: “I was pushing the metal into the press and that’s when the machine came down on me hand.  And before that, I went home for lunch and I said to my mother I’m not going to go in this afternoon.  And she said, ‘You go back and finish up the job proper!’  So I went back and that’s what happened.  So I blame her then.”

After being told by hand specialists that he couldn’t play guitar again, Tony went into a grand funk but snapped out of it thanks to the manager of the factory.  He gifted Tony a Django Reinhardt record, who also couldn’t use two of his fingers (the ring and pinkie finger of his left hand) because of an accident (a fire in a cavern).

Tony said of this life-changing experience: “It really inspired me to learn to play more so I made (wax and leather fingertips) so I could play. It’s a different thing altogether, starting from scratch and worse; especially after being able to play chords properly before.  That’s what made me sort of come up with the Black Sabbath thing, the sound.  Because it’s trying to make the sound bigger, to fill in for the full chords that I couldn’t play anymore.”

His finger had healed well enough by May 1978 to pummel Melody Maker critic, Allan Jones, for writing: “Musically, Black Sabbath are an Irish joke” and how the group “looked like Mott the Hoople groupies masquerading as gay Cossacks.”  Jones recalled of the one-sided fight: “He was taking off his Rolex and wrapping it around his knuckles and I thought ‘Aw no’ and he just split my lip.”

No word if Iommi used any leather and wax fingertips on his knuckles to keep the watch from sliding off…or if any gay Cossacks sued Jones for slander.