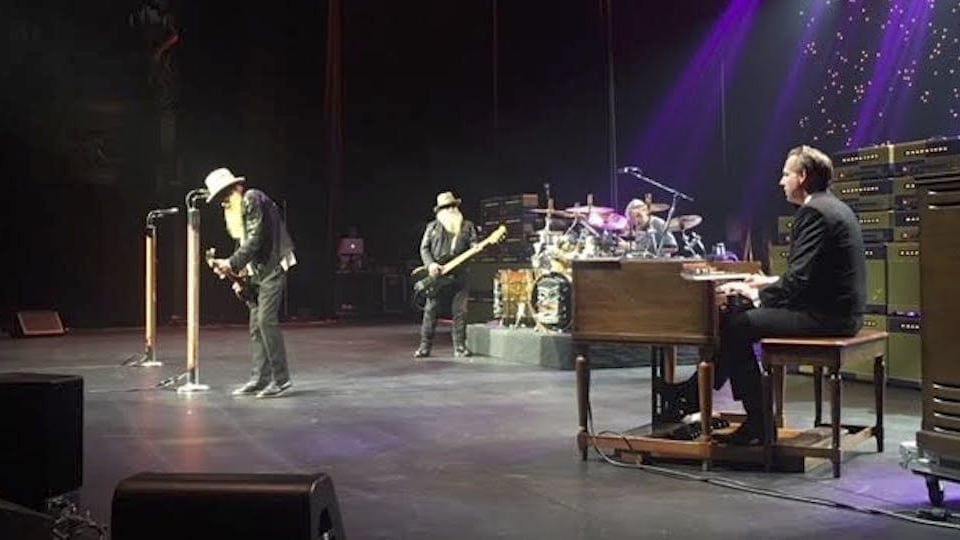 Growing up in Texas in the 1970s and ‘80s was a mixed bag for me, musically. I was a rock & roll guy, but country music dominated the South. For someone that didn’t drive a pickup or have a cheatin’ wife, I never connected with it. In my hometown of Denton, Texas (just north of Dallas), kids like me had Q102 album rock stickers on their cars. My red 1978 Camaro had one strategically placed on the rear window. My car’s 8-track player rotated Van Halen, Journey, Styx, and Boston through the Jensen coaxial speakers I had installed in the back. But without question, the tape that was almost always jutting out of my tape player was ZZ Top’s Deguello. That album was like nothing I had ever heard before. Rock, but blues-infused. Guitar driven, but with vocals that were equally nasty. Songs like “She Loves My Automobile” and “Manic Mechanic” sounded that much better when I was behind the wheel of my Camaro, cruising up and down the “drag” of my city. We cruised the strip looking for girls. (For me, finding Bigfoot would have been easier.) “Cheap Sunglasses” made even the nerdiest of kids feel like the coolest cats around. To this day, whenever I hear “I Thank You,” I crank it up and sing along.

Riding shotgun with me, was my younger brother, Mike. Back then, Mike and I couldn’t have been more different. I was the jock. He was a musician. While I was perfecting jump shots on the backyard hoop, he was holed up in his room plucking strings on his guitar and banjo. To me, I saw all the hours he practiced music as a waste of time. I’m sure he thought the same of my constant dribbling. But in my Camaro, Deguello appealed to both of us. On weekends, Mike and I would pull into the local quick stop where I’d buy a six-pack of Lowenbrau and a pack of Swisher Sweets cigars. At the time, the drinking age in Texas was 18 and sipping a beer behind the wheel was no big deal (today, doing both would be unthinkable). Picture us, windows down, smoking those cigars and drinking beer, with “I’m Bad, I’m Nationwide” cranked. Makes me smile even now.

Fast forward more than a few years. Achy knees have put my basketball days long behind me. But Mike, being a musician and the smart one, is still going strong. He traded in his guitar for a Hammond B3 organ where he honed his skills as a blues musician in Austin, Texas. Playing clubs such as Antone’s and Continental Club, my brother became part of the city’s thriving blues community. Although I was proud of Mike’s success, his accomplishments were largely lost on me. That is until the morning I woke up to a text from him that said: “Billy Gibbons came to the club last night. We hung out.” I called him immediately and the questions came in rapid fire.

“’What happened last night? What did he say? Was he cool? How did his beard look up close? Tell me he tossed you a ZZ Top keychain!”

So began a friendship between my brother and the guy that sang “La Grange.” Billy dug the soulful sounds of the B3; his father had played one. Over the years, Mike guested with ZZ Top at Montreux Jazz Festival, toured with Billy Gibbons and the BFG’s, and recorded a solo album, The Drifter, with a star-studded cast of musicians, including Billy. Once, Mike called me to say he was staying at Gibbons’ house and Billy had just delivered to his bedroom some pajamas and a few snacks (What kind of snacks?). Billy referred to my brother as “MoFlo”, a fusion of his full name, Michael O. Flanigin.

I was slightly jealous, to say the least. When Mike played in Havana, Cuba with Gibbons, I was in Denton hanging out with my buddy Johnny watching a documentary about the 2-dollar bill. Doesn’t have the same ring to it. When would I get to hang out with The Bearded One? When would I live the rock & roll high life? Well, that day finally came…in Las Vegas. ZZ Top recently held a residency at The Venetian Theater. Mike was there to guest on a couple of songs. He gave me a ring, “Hey man, I have a suite here. Jump on a plane and hang out.”

I hung up and booked a flight. Last minute flights are pricey! I didn’t care. I had a middle seat on the plane; I didn’t care. There was a screaming baby on the flight; I cared a little about that. But I was super-pumped about the weekend and nothing was going to dampen my enthusiasm. My bro was able to swing me an all-access “artist” pass. Artist access! That’s like being in the band, man! Well, almost. With that lanyard around my neck, I could go anywhere I wanted. How cool is that?

Much has been written about meeting your heroes. Once, years ago, I’d kinda sorta met George Thorogood after a concert. It was just me and him crossing paths for a hot second, but he acted like he didn’t see me when I told him how much I enjoyed the show. He walked right past me. I was a vapor. A mist. I didn’t exist. I’ve never forgotten it. Meeting the members of ZZ Top would be different. I had an “in.” I was a friend of a friend, so to speak. I had to be cool about it. No autographs. No stammering around. Just hanging out.

Mike had his own dressing room at The Venetian. In fact, there were four dressing rooms set up for the band. My brother and I walked down a long corridor somewhere in the maze of rooms and hallways that served as spaces for everything from production to security to hospitality. The first dressing room belonged to Dusty Hill, the next was Frank Beard’s, then came Mike’s dressing room and last was Billy Gibbons’. The area was a flurry of activity and people going about their work. It was opening night of the residency and there were details to hammer out. Trotting around amongst busy bodies backstage was a grey-snouted, little pooch. One of my life goals is to pet every dog I meet, so I stopped and knelt to give the little guy a few scratches.

I looked up and there was Frank Beard. I introduced myself as Mike’s brother and we shook hands. Gismo barked. “He hates it when people hug or shake hands. He thinks they’re fighting or something.”

Frank and I had a friendly conversation…about dogs. Gismo was 14-years-old and traveled with Frank on his bus. I told Frank about my dog Daisy, who lived to be 18. Rather than discussing rock n’ roll, we talked about our mutts. Looking back, the exchange seemed more personal. Frankly, it was a conversation I’m sure we both would remember the rest of our lives. (Well, not for him, but you see what I did there?)

We headed to Mike’s dressing room to hang out. There was Dos Equis in the refrigerator. Free Dos Equis, I might add. While coming down from the high of my Frank Beard conversation, in walked Dusty Hill. He was all business and asked Mike some technical music-type question of which I did not understand, but I stood up. After they figured out whatever it was that needed to be worked out, Mike introduced us.

I looked down at my shirt. Oh yeah, it had a picture of Steve McQueen on it. “Uh, thanks. The Great Escape is my favorite movie.” I replied.

And that was that. He said goodbye and left to get ready to play. Apparently, famous rock musicians are just regular people. They have dogs and like Steve McQueen. Who knew? Logically, everybody knows this, but when those rock gods ride in the backseat of your car throughout your teens playing the drums and bass for songs like “Jesus Just Left Chicago,” you tend to think that’s not the case.

Turns out, that it isn’t the case. When Billy Gibbons entered through the adjoining back door to our dressing room, he looked every part of what you’d expect a rock star to look like in person. Frank and Dusty were boots-and-jeans kind of rock stars; Billy Gibbons looks the part…always. Sunglasses, skull-shaped rings on his fingers, leather jacket, and his now-famed African headwear, he carries all the rock star accouterment. Meeting Billy Gibbons is like meeting Santa Claus, and not just because of his beard. He draws people in swarms. He can’t hide from being himself.

Mike made the formal introduction, “Billy, this is my brother Bill.”

“It’s MoFlo’s brother! How ya doin’ there, BroFlo? I think you still owe me twenty dollars for that dice game a while back.”

How was I supposed to respond to that? We ended up having a nice chat about a few things including our Texas roots and since we were in Vegas, some sound craps strategies. But showtime was nearing and things were starting to move fast. That said, I couldn’t resist asking Billy if we could get a photo together. He graciously obliged.

As he was leaving the dressing room, Billy turned and called my name. I looked up just in time to see him toss me something. The object arched across the room, spinning, and I snatched it out of the air. I unfurled my fingers and to reveal my prize. It was a casino chip. A special commemorative ZZ Top chip featuring Frank, Dusty, and Billy. Wow!

After examining the chip for a few seconds, I looked up to thank Billy. Like Santa Claus on Christmas Eve, he’d vanished. It wasn’t a keychain like in the Eliminator videos, but that didn’t matter. I had a cool casino chip and a story to go with it. Even better.

The night was just getting started and, looking back, it still seems surreal. Backstage, I stood and watched perhaps the greatest American rock trio play songs to the soundtrack of my youth. I watched my little brother play music alongside our rock idols.

In my mind, sipping Lowenbrau while cruising around in my Camaro and jamming to Deguello seemed like a dreamscape. Of course, that’s the beauty of the music we each embrace; it takes us places. For me, watching Mike play his B3, my fingers firmly wrapped around a casino chip, was a fan’s journey nearly forty years in the making — and a proud moment for this big brother. Now that’s a Vegas jackpot.

Photo Credit: All pictures are courtesy of writer Bill Flanigin.

5 comments on “Vegas with ZZ Top: A Tale of Two Brothers”