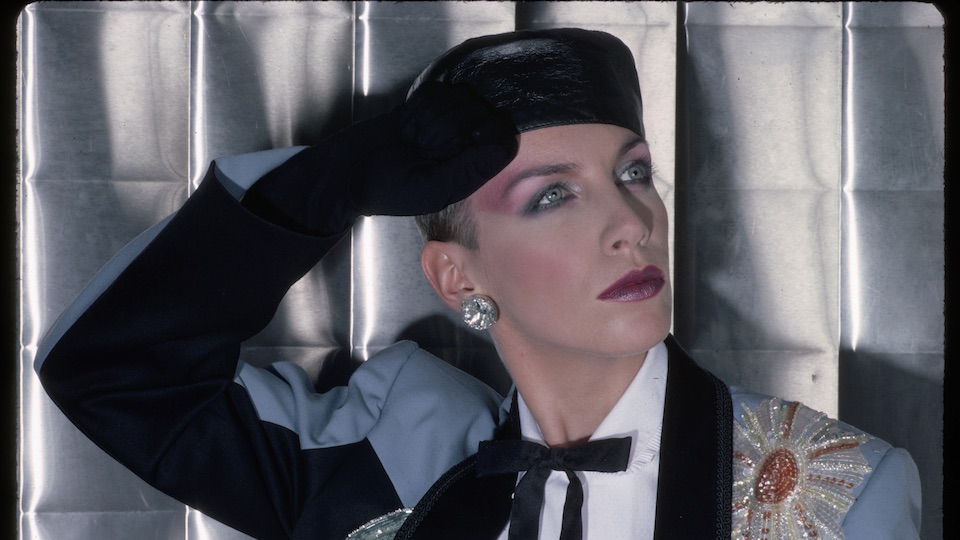 An alluring enigma in her own right, the one-of-a-kind Annie Lennox had us questioning everything from “what’s normal” to pop music and sexuality when she initially burst on the scene with Eurythmics in the 1980s. That decade was the perfect platform for Lennox.  Just as music television was taking shape, she excelled in creative, conceptual music videos as much as she did as a powerhouse singer. So credit some fortuitous timing for launching Lennox into the music pantheon where she remains one of the most powerful female vocalists of all time and continues to inspire musicians. Her multifaceted career has provided us with a lot to listen to. Whether with Eurythmics partner Dave Stewart or as a solo artist, here are ten of her finest performances.

In 1985, the Eurythmics started to veer away from the synth-heavy New Wave sound that put them on the map and head more towards soul and rhythm and blues. This new sound allowed Lennox to let loose and resulted in one of the band’s most radio-friendly tracks that’s hardly diminished in appeal.

Of all the tunes on this list, this one rates as the most atmospheric. The melancholic anthem picked up right where its predecessor (‘Sweet Dreams’) left off and became one of the biggest hits in the group’s history. The everlasting worth of this number is evidenced by its’ appearance in the 2019 Black Mirror phenomenon “Bandersnatch.” Even today, the Eurythmics are trending.

Lennox gave fans a fresh take into her new solo career with a soft ballad that might’ve been an ill-fit for the Eurythmics catalogue. Yet “Why” served as a lovely way for Lennox to assert herself as an independent entity. The highly-revered composition has emerged as one of the most covered songs of her career with renditions by Bon Iver, Allison Crowe, and even Neal Schon of Journey.

The follow-up to the Eurythmics’ breakthrough album Sweet Dreams Are Made of This was Torch, an LP with a debut single that told a dark tale of jealousy and infidelity, perfectly exemplifying the group’s edgy aesthetic. The song was accompanied by one of the most striking music videos of its time with cameos from Kiki Dee and Bananarama, and Lennox doing a sweet Nancy Sinatra impression.

Lennox’s solo debut Diva has some of the best compositions of her career. Unlike her work with the Eurythmics, this track had a much more upbeat feel with a great utilization of orchestral strings and a contagious groove. All that helped to make it Lennox’s highest chart-topper post-Eurythmics, outside of “Put a Little Love In Your Heart,” her duet with Al Green.

Lennox’s version of this ‘60s staple was a sinister marriage made in heaven. The song, the lead single off her sophomore solo LP Medusa, was the highlight of an album which consisted entirely of covers including renditions of Paul Simon’s “Something So Right,” Neil Young’s “Don’t Let It Bring You Down,” and The Clash’s “Train in Vain.”

4. “Sisters Are Doing It for Themselves” (feat. Aretha Franklin)

It’s extremely rare for two giants to come together and put out a song with such lasting power, but in 1985, the dream team of Annie Lennox and Aretha Franklin released a song for the ages. “Sisters Are Doing It for Themselves” brought together two of the world’s most soulful singers for five and a half minutes to sing the praises of female empowerment. It never gets old.

Arguably one of the smoothest, grooviest Eurythmics’ singles of all time, “It’s Alright (Baby’s Coming Back)” delivers an infectious horn arrangement and a vibrant music video, all anchored by Lennox’s insanely talented vocals. The song was also paired with some of Stewart’s most impressive guitar work. No small wonder, it landed in the top three.

“All mockery is laughing, all violence is cheap” Lennox exclaimed as she dared us to enter the luxuriant world of ‘”Savage,” her sultry ballad which conjures up a hypnotic dream. The album of the same name was a predominantly Lennox-driven project and gave us a hint of what lay ahead. It remains the most seductive composition in the Eurythmics’ discography. This one will send goosebumps down your spine.

The Eurythmics breakout hit was imperative to the identity of 1980s pop music. After Dave Stewart accidentally discovered the tune’s trademark synth line from a backward bass recording, Lennox contributed a haunting melody atop multilayered vocal tracks and the rest is history.