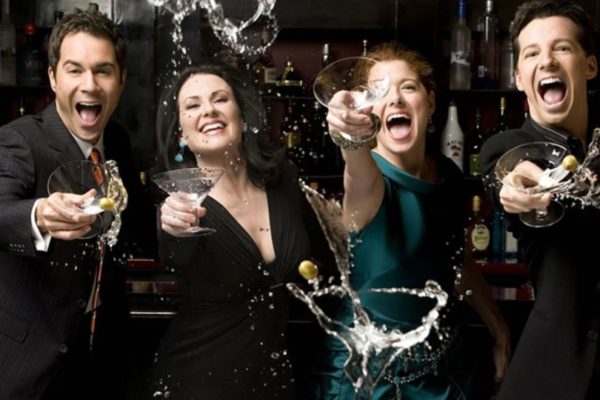 “Honey, what’s this? What’s happening? What’s going on here?” Fans of NBC’s hit sitcom Will & Grace sounded just like beloved, boozy gazillionaire Karen Walker as mysterious pictures of the show’s cast hit social media towards the end of September. Predictably, the Internet collectively lost its mind with speculation about a possible reunion — something not unfamiliar to rabid, nostalgic Friends fans — and in the midst of a stormy, divisive election, the dream of a Will & Grace reunion brought the country together for the briefest of moments. So when Will (Eric McCormack), Grace (Debra Messing), Karen (Megan Mullally), and Jack (Sean Hayes) finally resurfaced together again on September 26 in a ten-minute election-themed mini-episode entitled “Vote Honey,” the Internet went wild.

But this time, NBC joined them, announcing that “talks are underway for a potential revival” on the Peacock Network. Frankly, we couldn’t be more excited by the idea of bringing our favorite foursome back to television (even in a limited season-order), and you should be, too.  Here’s why:

Seriously Silly Social Commentary
Vice President Joe Biden said it best in a 2012 CNS interview, “I think Will & Grace did more to educate the American public [on LGBT issues] than almost anything anybody has done so far.” And he’s right. In its eight seasons, Will & Grace tackled a bevy of serious issues — mainly related to the LGBT community — with a generous mix of humor and empathy, giving them a level of mainstream attention previously unheard of on primetime network television. Though many current TV shows have diversified to include LGBT characters and actors, Will & Grace remains one of the most adored and groundbreaking shows. As more and more LGBT issues come to light, Will & Grace is still the silly social commentary we desperately need.

The Cast Was a Squad
There’s a reason all four main actors won Emmys (Mullally actually won two): the chemistry is perfect. As are the characters. Will’s uptight lawyer is the perfect foil for Grace’s neurotic, messy designer. Rich, snooty Karen meshes perfectly with poor, narcissistic Jack. All together they make for brilliant comedy whether flashing back to a very memorable Thanksgiving in the ‘80s (the classic two-parter “Lows in the Mid-Eighties”) or supporting Karen at the hospital when Stan has a heart attack (“The Hospital Show”). Other than our Friends down at Central Perk, there’s no other hilarious NYC gang quite like Will, Grace, Karen, and Jack.

Unresolved Storylines
Did Karen ever re-marry again? Did Jack ever find The One? What about Leo and Grace reuniting? Did Will and Vince live happily ever after? And what happened to Rosario or Karen’s arch nemesis, Beverly Leslie, who was last seen blowing away in the wind in the series finale? And who wouldn’t love to see Will and Grace mercilessly beat BFFs Rob and Ellen one more time during game night? The writers have plenty of options. We’ve got more to suggest if they’re curious.

Meme-Worthy Quotes
The show maybe titled Will & Grace, but Jack and Karen got all the best one-liners. Buzzfeed has dedicated numerous posts solely to Karen’s booze-soaked aphorisms like, “You say potato, I say vodka” or “Husbands come and go, but the Chanel slingback is forever.” And beyond his most famous catchphrase, “Just Jack,” Jack always found ways of insulting BFF Will (“No pecs no sex!”) and basically everyone else who crossed his path (“Anger doesn’t really go with what you’re wearing.”). Our GIF-happy Internet culture was made for Beverly Leslie gems like, “Karen Walker: I thought I smelled gin and regret” or Grace’s various freakouts (“I’m handing out lollipops and ass-whoopings and I’m all out of lollipops!”). If the show comes back, it’s a guarantee the writers will give us plenty more hilarious, meme-worthy quotes from the mouths of one of the best sitcom casts of all time.