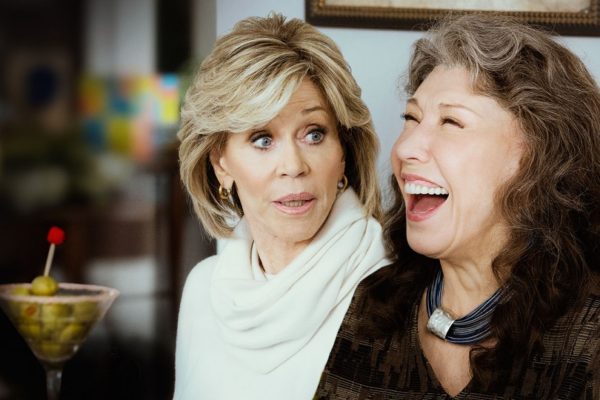 As co-executive producer of the Netflix hit Grace and Frankie, John Hoffman was bound to have uncanny insights into this delightful show’s two primary unforgettable characters (played by Jane Fonda and Lily Tomlin). And as an Emmy-nominated writer himself, Hoffman seemed also guaranteed to come up with crafting some highly entertaining answers when asked to curate a list of desert island CDs for these two titular leads. What wasn’t expected, however, was how deep and thorough his knowledge of the two legendary actresses’ careers would prove and how good — dare we say, impeccable — his own taste in music would be. And so without further ado…

What three CDs would you ship to Grace if she were stranded on a desert island?

1. Helen Reddy’s Greatest Hits — because there’s something so quintessentially ’70s feminist within Grace and she should always have at her access “I Am Woman,” “Leave Me Alone” and “You and Me Against The World.” The first for herself, the second and third to continue to deal with her feelings about Frankie (even though she’d be alone on this island).

2. Donna Summer’s Endless Summer: Donna Summer’s Greatest Hits — because there’s something so quintessentially ’80s power woman about Grace and she would always want to be inspired by, well, Donna’s voice…and “She Works Hard For The Money” (because she always does), “Hot Stuff” (because she is) and “State of Independence” (which is newfound and which she needs to continue to learn to embrace on this island).

3. Frank Sinatra’s That’s Life — because Grace needs a MAN on this island! And Sinatra is her kind of guy, truth be told — a little bad, a little rough around the edges, but all cool…with impeccable style. The title song would become her mantra and “Sand and Sea” and “I Will Wait For You” would be the romantic companion dream for her time alone here.

1. Bob Marley and The Wailers Catch A Fire — because, come on…Do I need to explain this?  Frankie?!  I mean, come on!!

2. The Shaggs’ Philosophy of the World — because Frankie would find hope in their pursuit of success as artists that not enough people appreciated. And she would just like their weirdness. And she would like to imagine Grace being driven crazy by having to listen to it if she was with her on this island.

3. A Tribe Called Quest’s We Got it From Here, Thank You 4 Your Service — because my girl is CURRENT! — and classic — and she likes that Q-Tip and the gang have her style and substance and because their mix of rap, social justice and Vincent Price is just too damn intoxicating not to spend every day listening to just this album in the sand forever!

Now…my three choices…(and this was a MOTHER!)…are all first albums. So. Make of that what you will.

1. Tom Waits’ Closing Time — because there are no better melodies in the history of melody and because it’s my favorite album ever by the funniest, most soulful heartbreaker poet freak at the peak of his powers even though he went on to do amazing things. This thing is perfection.

2. Roberta Flack’s First Take — because she is the voice that flattens me and here she is in 1969 being more raw than you knew she could be or would be again and between “The First Time Ever I Saw Your Face,” “Compared To What” and her “Ballad of the Sad Young Men.” I’d be in church on that island and would not care that I picked an album with only a scant eight songs for what could be forever.

3. Rufus Wainwright’s Poses — I know, this isn’t his first, technically, but this one is SO much better than his first that I’m compelled to help him out here and dub it his first. And I’ll be alone on a deserted island so I will be able to lie like that if only to please myself. I’m also taking this one because I will want to MOVE to his “California” and dream in the way he does about “Cigarettes and Chocolate Milk” and “Grey Gardens.”

Three comedies on Netflix any Grace and Frankie fan must be up to speed on, in my humble opinion, must start with the obvious…

1. 9 To 5— because “oh, just watch it and you’ll love the holy hell out of it” and because the two geniuses are brilliantly funny here along with the equally brilliant Mr. Coleman, Ms. Wilson and the one and only Ms. Parton whom…yes, of course we’re trying to get a part for her on G&F, what do you think?!?!?

2. Flirting With Disaster — because there are hints of Lily’s Frankie within here and because I think it’s one of the best comedies made within — and it hurts me to think this could possibly have been made so long ago! — the last 20 years.

3. Cat Ballou — because this movie is insane in all the right ways and because Jane is drop-dead stunning and funny and game for all the insanity and Lee Marvin is ridiculously perfect opposite her as the drunkest man ever on film who went on to win an Oscar — but it’s still Jane you’ll have your eyes on throughout. It’s a comic-western romp and Stubby Kaye and Nat King Cole sing the title song — together on screen — IN the movie. Go. Get thee to Netflix now and binge away!!!

PS. We’re doing our part to make your holiday shopping a little easier. Visit our store to find cool stuff to buy. It’s powered by Amazon, so you know you can trust it. Plus, shopping here helps support CultureSonar. Everybody wins!

PPS. You may also enjoy our posts on some other great records: A Staggeringly Good New Album from…The Monkees, Forty (!) Years Later, “Songs In The Key of Life” Is As Fresh As Ever, The Who’s 11 Studio Albums: From Great to Glorious, and 5 New Albums That Keep the Spirit of the ‘60s Alive.