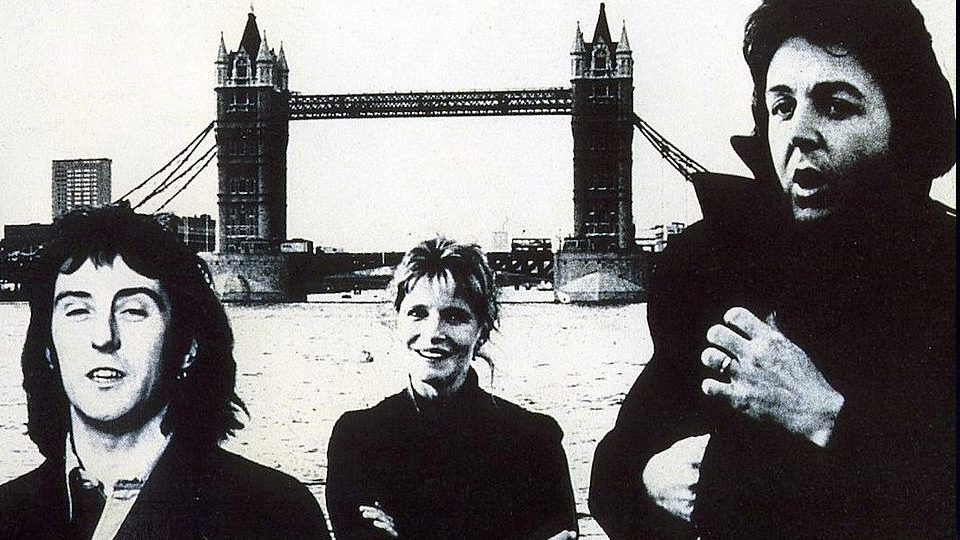 Such was the established popularity of Paul McCartney and Wings in the 1970s that the prospect of their sixth album had fans and critics all a-twist. The resulting endeavor was 1978’s London Town, a tuneful, dense LP that displayed Paul’s melodic lyricism and studio skills to a high gloss.

It was released with fanfare and yielded one #1 hit, “With a Little Luck,” likely its best-known track. Yet for many, those high expectations fell a bit short of the glory. The album’s release was delayed by the pregnancy of his bandmate wife Linda and the loss of two of their five-member group when Jimmy McCulloch and Joe English left for greener pastures. The album cover art seems to corroborate some of this tension, with its grey London skyscape and the rather strained-looking poses of McCartney and his remaining bandmates, Linda McCartney and Denny Laine.

While the backstory of its inception might not be the most promising, London Town still has a great deal to recommend it. Sir Paul exhibits his well-honed musical chops, delivering great melodies and virtuoso instrumentals. Linda and Denny step up admirably as well. The result is a well-crafted labor of love with some filler and a few misses, but an overall lovely pop/rock sound that fit the era snugly.

The opening track is the titular “London Town,” a melancholy ode to the city and its mysterious inhabitants. It is rich in synthesizer and background instrumentals and McCartney’s tender vocals. It’s an introspective cousin of The Beatles’ “Penny Lane,” opening with “Walking down a sidewalk on a purple afternoon/I was accosted by a barker/playing a simple tune upon his flute/toot toot toot toot.” The gentle whimsicality is an effective beginning.

It then swings into “Cafe on the Left Bank,” a vibey slice of life depicting “English-speaking people, drinking German Beer/talking way too loud for their ears.” It’s a bouncy earworm that goes down as easy as the beer in question. “I’m Carrying” is a sweet tune of romantic mystery with an old-timey feel. It is followed by the catchy rocker “Backwards Traveler” which, at only 1:10, leaves the listener wanting more with its ear-pleasing chord changes and truncated finish.

We get some lilting Irish sweetness from “Children, Children,” co-written by McCartney and Laine. It celebrates the innocence of childhood with pretty harmonies and a tone of a mystical lullaby.

Next up is “Girlfriend,” actually written by Paul for Michael Jackson, who got around to singing it a year later on Off The Wall. Jackson’s is the better-known (and possibly superior) rendition, but Paul handles it well with yearning falsettos and the addition of one of his trademark “hooky middle eights,” a sweet bridge to round out the song.

“I’ve Had Enough” delivers the most exemplary classic “Wings” feel. An anthem of spirited dissatisfaction with the vicissitudes of life plays like a banger and cries out for crowd singing (“I’ve had enough!/I can’t put up with any more/No No No No No.”).

Side Two begins with the arguable masterpiece of London Town: “With a Little Luck.” This track hit #1 on the pop charts in the States (and #5 in the U.K.), and it deserves appreciation and airplay today. It’s dreamy vintage Paul, with his unique skills in full play. Almost six minutes in length, “With a Little Luck” is an ode to optimism and keeping an open heart. The melody and harmonies are exquisite, the lush instrumental riffs powerful and involving. It builds up to a sweet emotional crescendo before easing the listener down.

“Famous Groupies” fares less well. Intended as a satiric mockery of heavy-handed female fans, it tries for snark and humor that doesn’t always land. It ends with a theatrical spoken-word portion by Paul that feels forced and a little squirmy. It does, however, deliver some grin-worthy wordplay, rhyming “groupies” with “two peas,” “rupees” and “snoopies.”

From snark to sweetness, next comes “Deliver Your Children.” Another McCartney and Laine collaboration, it is an upbeat number touting the importance of providing the next generation with love, support, and nurturing. Catchy and harmonic, “Deliver Your Children” is a moving piece with a timeless message.

A respectable Elvis-flavored tune, “Name and Address,” is next. Paul does a fine imitation of The King which is fun to listen to and easy to forget.

London Town‘s last two tracks don’t seem to be in the same musical vein as their predecessors. “Don’t Let it Bring You Down,” another ode to keeping the faith but filtered through a voice of pain, is well-crafted but filled with heaviosity. And the quirky “Morse Moose and the Grey Goose” finishes out London Town with six and a half minutes of stirring opening instrumentals that morph into a progressive rock sea chanty that feels like it would have taken up better residence on another album.

And there you have it. Wings’ London Town is a fine work with some flaws and shortcomings, but a lot of special features. It’s artistically lean, musically dense, and deserves more recognition and kudos.

17 comments on “Wings’ “London Town”: Time for A Fresh Listen”