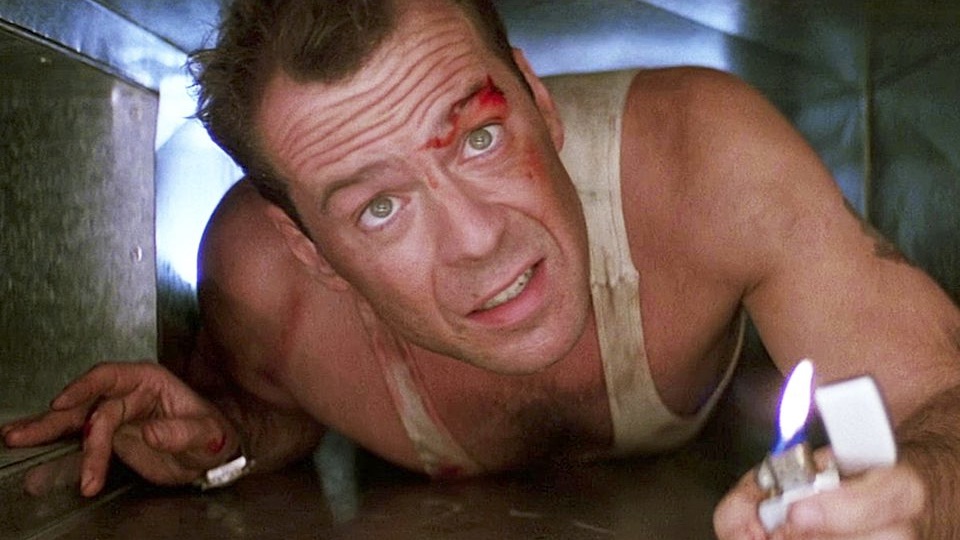 Christmas time is here again, and we’re all feeling a little…tired. It’s the same old routine of treacly holiday movies. So, let’s make it different this time, and change up our film selection. There are plenty of seasonal offerings to take your mind off yet another viewing of Elf or Home Alone.

Brazil (1985): Arguably the most accomplished film to make this list, Terry Gilliam’s dystopian masterpiece is a piece set in the heart of Winter, as Sam Lowry (an extraordinarily adept Jonathan Pryce) measures the quantity of his integrity against the commodities sold, wrapped and delivered during the Yuletide season. Between these silhouettes comes a tale of love, as Lowry decides that the fantasies he has created for himself are superior to the ordeals he undergoes in his place of work. Notoriously difficult to sell in America, Gilliam finally unveiled his work in 1985, signaling a change of tone in future sci-fi and Christmas pictures.

An Affair To Remember (1957): This Cary Grant venture is the most unabashedly romantic film on this list. Spearheading a newer movement of romantic comedies (Sleepless In Seattle writer Nora Ephron has openly acknowledged the influence), the film closes as two wayward lovers meet on a Christmas Eve, with the promise of everlasting love.

On Her Majesty’s Secret Service (1969): Majesty’s is unique for two reasons. Firstly, it’s the only James Bond film in the series to star George Lazenby. Secondly, it’s the only film specifically set at a festive time of year. Premiered on December 18th, 1969, the Bond filmmakers made ample use of the festive season, particularly in the story’s centerpiece, Bond escaping through a Christmas market, the sounds of “Do You Know How Christmas Trees Are Grown?” playing through the airwaves. Furthering the nativity analogy, Bond falls helplessly and hopelessly in love with the woman he shares a stable with. It’s the most well-rounded Bond film and one that proved the blueprint for Daniel Craig’s escapades, Casino Royale, and No Time To Die.

Gremlins (1984): It was never as popular as its more child-friendly competitor Ghostbusters, but this canny Joe Danté feature demonstrates a respect for his intended audience, lavishing children with ridiculous set pieces and sharp moments of introspection. As it happens, audiences were initially uncomfortable with the film’s macabre tone (the “gremlins” are naturally terrifying), and like Indiana Jones and The Temple of Doom before it, led the  Motion Picture Association of America (MPAA) to create a new rating that catered for an audience that sat awkwardly between childhood and more mature adolescence. It was the PG-13, a rating that still informs a teenager’s self-importance to this day.

Kiss Kiss Bang Bang (2005): Shane Black’s directorial debut is a feast of Christmas hats and sleigh bells as slain henchman follows slain henchman. A neo-noir drama in whites and reds, it borrows as much from It’s A Wonderful Life as it does from Raymond Chandler. A perennial backdrop in Black’s oeuvre, the Winter settings seem crisp for the car chases. Dressed in Santa attire, Michelle Monaghan mirrors the mounting bloodied corpses and the film’s release was met with the general festive goodwill associated with Christmas. Robert Downey Jr certainly benefitted: the film restored much of his commercial caché.

Batman Returns (1992): Michael Keaton’s second appearance in the cowl (he is soon to reprise the role for the third time in an upcoming DC movie) is a strangely forlorn feature, which likely explains why director Tim Burton wasn’t asked to direct the more uplifting Batman Forever in 1995. Indeed, the film feels more like a Burton film starring Batman, as the comic book hero compares himself to the monsters, rogues, and freaks that parade his beloved Gotham. And yet there is romance, as he kisses Selina Kyle beneath a heap of mistletoe. Exposed to the woman of his dreams, he returns to the snow-laden streets, with only his beloved Alfred to celebrate Christmas with.

Trading Places (1983):  There was a period in the eighties when John Landis could do no wrong. That all changed during the making of Twilight Zone: The Movie, but before his fall from grace, he did offer the world one more scathing dissertation on American politics. Trading Places made a star out of Eddie Murphy, which might explain why he was so eager for Landis to direct Coming to America in 1988. Starring as a poor street hustler, Murphy’s Billy Ray Valentine is given the ultimate Christmas present when he’s offered the chance to stand in for  Louis Winthorpe III (Dan Ackroyd), a commodities director at Duke & Duke. The position makes Valentine rich, but the price is on Winthorpe’s head. In one of the film’s more indelible scenes Witnhorpe is forced to walk the streets of New York, with nothing to warm him, but a Santa costume. It’s all so much funnier than it sounds!

A L’Interiur (Inside) (2007): Brazil flirted with horror, Batman Returns tipped its hat at the genre, but this dazzling French film plunges viewers headfirst into the genre. Alysson Paradis stars as Sarah Scarangella, an expectant mother being stalked by another woman. Caught between saving the life of her future child, as well as her own, Sarah races through the snow to find shelter for herself, as the nights grow longer and the weather icier. Deliciously perverse, the film is also notable for its tight runtime, a taut thriller that leaves you aching for more. Just make sure you don’t eat anything too heavy before watching.

The Lion In Winter (1968): Uniting his disparate family over a Christmas banquet, a king must decide his successor—should he feel his sons are up to it. This medieval drama is best remembered as the one that launched Anthony Hopkins’ career, although you would never guess it from watching it, such is the caliber of the cast. Naturally, there’s Peter O’Toole to consider, Katharine Hepburn too (she won an Oscar for the performance), but Jane Merrow also makes an impression as a haughty, headstrong mistress aching for everlasting love. Indeed, everyone proves worthy of their craft, but Timothy Dalton is the real scene-stealer. Playing the stoic Philip II, Dalton vacates himself from the family disputes but plots his attacks behind the sanctity of an unattended chessboard. And when he strikes his blow, he plunges it straight into the gut of the king he wishes to topple.

Die Hard (1988): You didn’t think we’d leave this one off the list, did you? From the Santa hats to the closing “Let It Snow,” this is a Christmas film with added ham, turkey, and dressing. Simply watch how gleefully Alan Rickman transforms himself from consummate stage actor to sneering baddie, and revel in the absurdity that it is his terrorist’s plot. Moreover, the film holds a message everyone can get behind: no matter how bad the struggle may seem, family and love conquer all. Yippee ki-yay, Motherf-