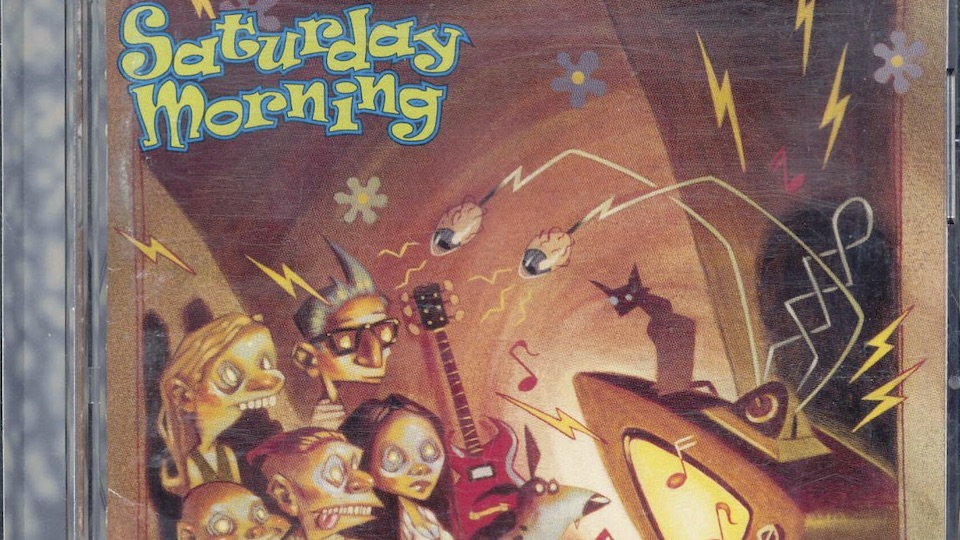 During the 1990s, it seemed as if there was a new tribute album issued every week. Artists as varied as Bruce Springsteen, Black Sabbath, and XTC were celebrated with all-star records saluting their music. Among the many tribute discs released during that time was 1994’s Saturday Morning Cartoons’ Greatest Hits, a compilation of classic theme songs performed by a group of alternative, rock, and pop artists. The record was produced by Ralph Sall, who also worked on Deadicated, a salute to the Grateful Dead, Common Thread: The Songs of The Eagles, which featured country artists offering their interpretations of Eagles tunes, and Stoned Immaculate: The Music of The Doors. Saturday Morning Cartoons’ Greatest Hits features artists like Violent Femmes, Sublime, and Collective Soul offering their takes on the memorable theme songs from some of the most beloved cartoon shows of the 1960s and 1970s, including Underdog, Speed Racer, and Scooby-Doo, Where Are You?

The roster of artists features an eclectic bunch of then-popular alternative acts, power-pop heroes, and veteran punk rockers. Liz Phair and Material Issue kick off the album with their energetic cover of “The Tra La La Song (One Banana, Two Banana)” from The Banana Splits, which sets the tone for the rest of the record. The musical styles on display bounce from the power-pop version of “Scooby-Doo, Where Are You?” by Matthew Sweet to the heavy metal flavor of Helmet’s Gigantor, then back over to Juliana Hatfield and Tanya Donelly’s effervescent romp through the title song to Josie and the Pussycats. The bands all seem to be having a blast, including The Ramones (clearly the elder statesmen in this lineup) who offer their typically Ramones-ian run-through of the theme to the 1960s Spider-Man series. Other standout tracks include Sublime grooving out on their reggae and ska-styled cover of the theme to  Hong Kong Phooey and The Murmurs’ sprightly version of the title song to the Sid and Marty Kroft classic H.R. Pufnstuf.

There are also non-theme song selections on the disc, with some artists choosing to take on standalone songs that were featured in memorable episodes of classic animated shows. Violent Femmes turn “Eep Opp Ork Ah-Ah (Means I Love You)” from The Jetsons into a guitar flavored jam and Frente! amps up the brightness in their version of “Open Up Your Heart And Let The Sun Shine In,” from The Flintstones. The Reverend Horton Heat combines the theme song to Jonny Quest with “Stop The Pigeon” (from Dastardly and Muttley In Their Flying Machines) in manic, high-energy fashion. In the album’s sole concession to the then-present day of the 1990s, Wax provides us with their version of “ Happy, Happy, Joy, Joy” from The Ren & Stimpy Show, which fits in quite comfortably with the rest of the songs on the disc.

Saturday Morning Cartoons’ Greatest Hits is an offbeat idea which yields enjoyable results. The album is something of a pop culture time capsule of the era in which it was released, as a number of the bands featured on the disc were at the height of their popularity during this decade. As was common in the 1990s, there were some companion items to the disc released as well, including a comic book from Marvel, and a VHS compilation of videos, hosted by none other than Drew Barrymore. Several of the videos also saw heavy rotation on MTV including Mary Lou Lord and Semisonic’s version of  The Archies bubblegum classic, “Sugar Sugar.” Listening to this record will bring back memories of plunking yourself down in front of the TV in your pajamas on Saturday morning, watching cartoons while enjoying your cereal and snacks. There may have been a plethora of tribute albums released during the 1990s, but few of them were this much fun.