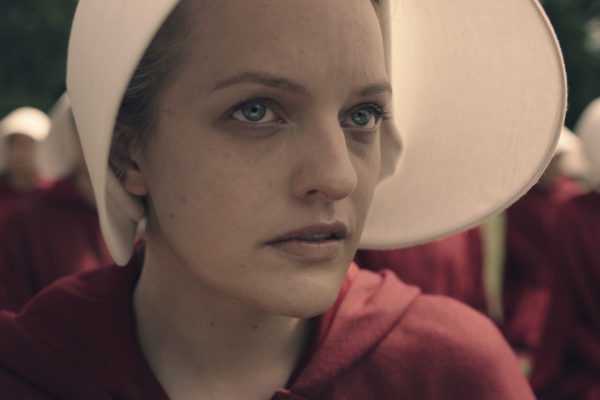 Believe it or not, it was once possible to “keep up” with television — to watch or VCR at least some of every culturally important scripted comedy and drama. Imagine a time when there were just three or four networks that mattered, plus PBS if you liked British accents and maybe HBO if your family could afford it. Fast forward to last year, when broadcast, cable and online/streaming services combined for a record 455 scripted comedies and dramas. Who’s got time to sift through all that? I’m an avid TV watcher with subscriptions galore, yet even I haven’t seen it all. Luckily, I can crowd source a critical consensus via Metacritic and Rotten Tomatoes scores for every scripted series to debut in the last 12 months, which I have exhaustively done. You’re welcome. And now, the list…

1. The Handmaid’s Tale (Hulu): 92 Metacritic; 99% Rotten Tomatoes
Dark, dark, dark, but oh so good, Hulu’s almost too-timely adaptation of Margaret Atwood’s 1985 dystopian novel has the distinction of being the first streaming series to win a Best Drama or Comedy Emmy, much to Netflix’s chagrin. That’s only one of its eight wins, too, which included awards for writing, directing and production design. (If there’s a better-looking show on television, neither I nor the Academy of Television Arts and Sciences has seen it.) At the center of it all is Elisabeth Moss giving yet another performance of a lifetime.

2. Dear White People (Netflix): 85 Metacritic; 100% Rotten Tomatoes
Have I mentioned timely? Justin Simien’s comedy of wokeness and self-awareness on the campus of a (fictional) historically black college was an entertaining feature film when it came out in the Obama era. In adapting his work for Netflix, Simien broadens and deepens the story while keeping his cultural commentary in sharp focus. With the film’s excellent lead, Tessa Thompson, now tearing up multiplexes as Thor: Ragnorok’s Valkyrie, her small-screen successor, Logan Browning, has broken through as a bona fide star.

4. Legion (FX): 82 Metacritic; 90% Rotten Tomatoes
It’s based on a Marvel comic, but if you didn’t know…you wouldn’t know. Haller (Dan Stevens) is a well meaning if deeply disturbed schizophrenic who happens to have immense psychic powers. A ragtag army of other mutant outcasts rescues him from evil government forces, but their battle is backgrounded by the greater conflict raging inside Haller’s head—most often with Lenny (the searingly great Aubrey Plaza), a mental projection who may have an agenda of her own. Showrunner Noah Hawley serves up moments of horror more terrifying that any I’ve seen on TV this year, cable news notwithstanding.

5. A Series of Unfortunate Events (Netflix): 81 Metacritic; 95% Rotten Tomatoes
Second time’s the charm for Barry Sonnenfeld and the best selling YA book series from Lemony Snicket. Sonnenfeld exec produced the not-spectacular 2004 film adaptation before taking another shot with Netflix. Impeccable casting is key, most notably the omni-talented Neil Patrick Harris as Count Olaf and Patrick Warburton as Snicket himself, narrating the all-too-tragic misfortunes of those poor Baudelaire children.

6. Feud: Bette and Joan (FX): 81 Metacritic; 91% Rotten Tomatoes
Let us stop for a moment to praise Ryan Murphy’s range, from Glee to Eat Pray Love to American Horror Story. Feud, his latest, is a dramatized take on the real-life rivalry between Whatever Happened to Baby Jane?’s “psycho-biddy” co-stars Bette Davis (Susan Sarandon) and Joan Crawford (Jessica Lange). Come for the catfight, stay for the incisive jab at Hollywood’s legacy of sexism and ageism.

7. Big Mouth (Netflix): 80 Metacritic; 100% Rotten Tomatoes
If the formula for comedy is “tragedy plus time,” the formula for this edgy animated series is “puberty plus time.” Yes, Nick Kroll’s Big Mouth is a sharp, funny look at the hairy, pimply minefield that is adolescence, but this TV-MA comedy is by no means suitable for that impressionable demographic. (I would think any sensitive 13-year-old would see this cartoon as half documentary, half horror film.) The rest of us — even those closer to middle age than middle school — can enjoy episodes like “Girls Are Horny Too” and “Requiem for a Wet Dream.”

8. The Good Fight (CBS All Access): 80 Metacritic; 100% Rotten Tomatoes
A spinoff to CBS’s long-running, recently concluded drama The Good Wife, Fight follows a successful lawyer (the always riveting Christine Baranski) on the verge of retirement, forced to start over after a financial scandal. Astute readers may have noticed that no show on this list airs on broadcast TV, although this comes the closest. Instead, the CBS elected to make it exclusive to their new subscription service, All Access. Go figure: You literally need a password to find CBS’s best new show.

9. The Marvelous Mrs. Maisel (Amazon): 80 Metacritic; 95% Rotten Tomatoes
The titular Mrs. M (Rachel Brosnahan) is a well-to-do 1958 Manhattan housewife who finds a future in the burgeoning world of stand-up comedy after her husband leaves her for another woman. The series comes from Amy Sherman-Palladino, best known as the creator of Gilmore Girls, so you can count on quippy dialogue delivered by a top-notch ensemble: Alex Borstein, Tony Shaloub, Kevin Pollak.

10. One Day at a Time (Netflix): 79 Metacritic; 94% Rotten Tomatoes
Beginning with All in the Family in 1971 then continuing through Sanford and Son, Maude, Good Times, and The Jeffersons, Norman Lear reinvented the sitcom by touching on topics once considered taboo in prime time: politics, race, class, and gender. His original One Day at a Time premiered in 1975 and ran for nine seasons. This reboot recasts the working class single mother (Justina Machado) as an Army Nursing Corps veteran raising two kids with a little help from her mom (national treasure Rita Moreno). Despite its old fashion sitcom format, the jokes land and the heart is still there, making this one 2017’s second most satisfying TV revival, after Showtime’s brilliant Twin Peaks: The Return.

Photo Credit: Elisabeth Moss as “Offred” in The Handmaid’s Tale, courtesy of Hulu