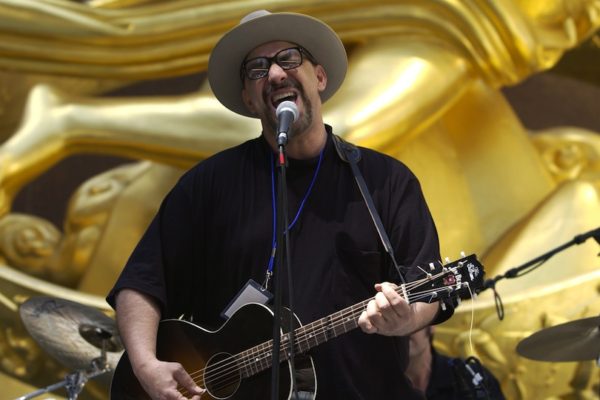 Although it briefly trended on Twitter, the death of Pat DiNizio on Tuesday seemed to quietly slip under the radar of a busy news cycle. Maybe that’s fitting somehow, since the band that DiNizio fronted, The Smithereens, didn’t ever force themselves to the forefront of pop music, but were instead content to churn out a steady torrent of singles and albums that showcased their brawny guitar assault and DiNizio’s unerring songcraft. They did manage to spend some time in the Top 40 in the second half of the 1980s, and those singles were extremely welcome at a time when rock music was dominated by flash and style without much substance. Here are five of their finest songs, but you really can’t go too wrong with anything from DiNizio and this underrated band.

Hair like Jeannie Shrimpton and a stance like Bill Wyman? No wonder the narrator of this thunderous rocker is so enamored. And, chances were, if you got those references, you were quickly enamored with The Smithereens. DiNizio plays the romantic underdog well, only making contact with this rocker girl while he’s dreaming. Found on the band’s first album, Especially for You, the song already contains all of the elements that made them special.

If only for Mike Mesaros’ insinuating bass line, this song — also off their debut Especially For You — would prove to be a classic. When you add in the ringing guitars of DiNizio and Jim Babjak and the thundercrack drums of Dennis Diken, you had a lethal formula. The swagger of the instruments is contradicted by DiNizio’s dark tale of lovers whose own personal darkness keeps them from ever nearing happiness. Garage rock might with power pop precision and melody: This is irresistible stuff.

Once again we find the band covering the territory of tortured love with their signature potency and pathos. After some exciting opening moments, including a feedback fade-up, a snarling guitar riff, and snappy drums, DiNizio launches into a tale of a guy who’s living in his past because he can’t bear the present. “In a world of pain, I have no peer,” he sings. Again, it was only a minor hit, but it has ended up showing much greater staying power than most of the songs that charted above it.

That opening riff would have fit well into an AC/DC album. As opposed to some of the previous singles mentioned above, the narrator here shows some confidence that he and the object of his intense affection will actually come together at some point. His relentless pursuit is matched by the charging guitars, including a searing solo that leads deftly back to the chase. Nice call and response at the end as well between DiNizio and backing vocalist Maria Vidal, who had a minor hit herself on the U.S. Dance Charts in ’84 with “Body Rock.”

The Smithereens usually harkened back to ’60s garage rock, but here they nail the acoustic guitars with baroque instruments approach that The Beatles innovated back in the day. (The harpsichord solo even echoes “In My Life.”) Belinda Carlisle turns up on backing vocals, but DiNizio is the star of the show, concocting a gorgeous melody and getting deep inside the head and heart of the regretful narrator. If you thought all they could do was rock, here is stirring evidence to the contrary.

PS. We already know that you like Pat DiNizio and The Smithereens because you told us they were one of your favorite bar bands of all time.

2 comments on “Five Classics from The Smithereens”