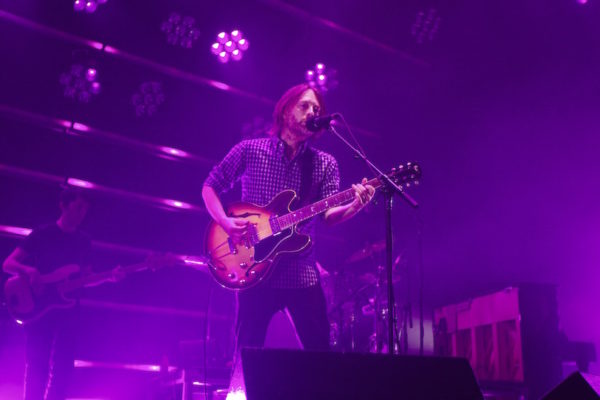 Radiohead has become arguably the most critically-acclaimed and venerable band of its era, even with having only once released anything resembling a hit single (the semi-novelty “Creep”). Yet albums like The Bends, OK Computer, and Kid A  have moments that haven’t been overly-explored  by the band’s legion of fans. Dig deeper and you’ll find certain unheralded tracks that didn’t make any of the band’s LP’s, but that nonetheless demonstrate the band’s unique ability to suggest society’s bleakness while soaring above it through majestic, inventive music. Take a listen to what you might have missed.

Radiohead has long been known for their willingness to push the boundaries of rock into weirder and more thrilling territory. But none of that would matter much if they didn’t have the song-craft to form the foundation of it all. Before they started their turn for the experimental, this lovely, melancholy track from their debut album Pablo Honey showed their ability to make an impact with nothing much more than a riveting melody and bittersweet sentiment.

If you’re looking for the finest Radiohead track to never surface on a studio album (“True Love Waits” held that title until it made it onto A Moon-Shaped Pool last year), search no further than this trip-hoppy number from a 1996 EP. The way it builds from the most basic elements into an intense sonic experience is thrilling, and Thom Yorke’s attitude-drenched lyrics fit the funk created by drummer Phil Selway just right. “I’m ready,” Yorke sings to his persecutors, and with music this potent at his side, you can understand why.

This is one of the songs that didn’t quite make the cut for OK Computer. It has the album’s same woozy atmosphere hanging about it, what with strange airport-intercom voices and spooky “Riders on the Storm” keyboards. Eventually all of the disparate elements coalesce behind a brooding Yorke, who seems to be singing to himself in the future, telling himself to “Play me this song” to bring him back from his expected collapse. Very strange, and strangely compelling.

Amnesiac is an album that seemed designed to keep the listener at arm’s length, which is why the relatively straightforward instrumental approach of horns and pianos on this track is almost startling when it appears. The funereal whine of the brass in the chorus brings the listener staggering to the close of the album, unsure of what they just heard but wanting to dig right back in to see what they’ve missed. Radiohead have always been experts at closing out albums, and this is a great example of that strength.

Here’s a track that the band doesn’t even really put into its live repertoire, which is a shame because the groove conjured by bass, piano, and drums is swaggeringly catchy. You could really get away with just that rhythmic base and have an excellent track, but Yorke adds spice with some cheeky lyrics about an ill-advised squabble. Hail To The Thief is the band’s most underrated album, and this is the most underrated track on it, which means it’s ripe for rediscovery.

Sending out Hail to the Thief on an ominous note, this mysterious track soars from angsty verses into an unabashedly pretty chorus and does so effortlessly. The verses are a kind of stream-of-conscious riffing by Yorke, with the band staying back for the most part in the first stanza before crashing all around him in the second. The harshness of the words in these sections is leavened by the soft music in the refrains, and Yorke’s wordless cooing at the end seems like a cry for mercy.

When you think about the music of Radiohead, you probably imagine it moving along at a stately pace. But this track off In Rainbows shows the band’s instrumental dexterity as they cook along at a blistering pace. Phil Selway and Colin Greenwood lock into a hustling groove, while the guitars of Ed O’Brien and Jonny Greenwood fill in all the gaps with a combination of melodic punch and grinding power. In the midst of it all, Yorke sings about, of all things, a hookup at a club and the emptiness surrounding it.

In this outtake from In Rainbows, Yorke urges us to be vigilant for something that’s coming in the near future, but he never specifies just what. That makes it even scarier somehow. “This is just a nightmare/Soon I’m gonna wake up,” he sings, but the fragility of the melody and the insistence of the refrain seem to suggest that the nightmare is just a prologue for a terrible reality. Whether we are quick or wise enough to heed this vague warning is what makes the song so harrowing.

The King of Limbs was only eight, relatively short songs long, making the album feel more like an appetizer than a proper, meaty Radiohead album. But there are excellent moments throughout, with a lot of them coming from this slow-motion track that owes a little to previous triumphs like “Pyramid Song” and “Motion Picture Soundtrack.” Nobody conjures atmosphere quite like this band, and they do it here even before Yorke enters the picture with lyrics about a spiritual deep dive into healing waters.

It seems like Radiohead might have been listening to The White Album before recording this fascinating track from A Moon-Shaped Pool. There is a perfect slow-build in intensity here to the powerful closing moments of the song. This is another example of how the band can pull seemingly disparate elements, like random piano notes, a repeated acoustic guitar rhythm, Colin Greenwood’s rumbling bass, and, eventually, an austere string section, into a coherent whole. “The future is inside us,” Yorke insists, but the moodiness of the music suggests that he’s not all that optimistic about that prospect.