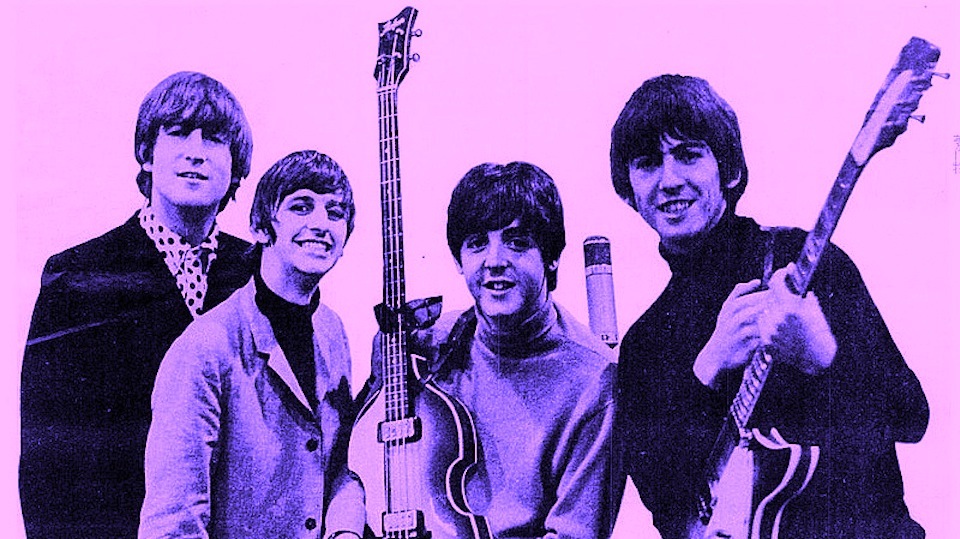 The Beatles did not invent the middle eight…but they may have perfected it.

The term “middle eight” refers to the part of a song that deviates from the standard verse-to-chorus sections. Sometimes called the “bridge,” the Beatles exclusively dubbed it the “middle eight” section – acknowledging it as the eight bars of music in the middle of the song.

Not every Beatles song contains a middle eight.  Grand examples like “Strawberry Fields,” “Help,” “Helter Skelter” and “For You Blue” do not call for a departure from the standard verse-chorus-verse-chorus pattern. John Lennon was more practiced in writing non-middle eight songs than his colleagues Paul McCartney or George Harrison. But when he and the others did add that special section, it often resulted in world-class musical creations:

What started out as a slow Roy Orbison-sounding tune, morphed into a rev-up and their first #1 hit (although not on all of the UK charts). This established their use of the middle eight, as the song breaks from chorus with a split-second Ringo solo before John rapid-fires his words, “I don’t want to sound complaining, but you know there’s always rain in my heart.” George and Paul echo him with “in my heart” just before the ascending climax “with youuuuu.” All done in a matter of 16 seconds.

Commenting on the social class elite in his workingman’s way, George gives us a cynical middle eight that drives the key upward over a harpsichord. Stuck for an appropriate change in the message, and feeling the words were getting a bit too heavy (“In their eyes, there is something lacking”), George turned to his mother for her views. She instantly came up with the humorous line, “….what they need’s a damn good whacking” grounding this musical observation with a lighter tone.

John has admitted these two songs were the same tune in their basic structures. Dipped deep in the chocolate of 1950’s style ballad writing, both songs cut to classic middle eight sections where Ringo goes to his ride-cymbal and Paul and George scat harmony behind a shouting, but crooning, John Lennon. There is great power in these middle eights, as in both cases, the volume of the song returns to a softer level to play out the final verse.

Now in the midst of their Beatlemania years, the band had to find ways to amuse themselves as their claustrophobic lives were beginning to take their toll. That self-entertainment shows up in this middle eight. Not only is it a great lyrical account of what would be described (years later) as “the story of the bitch,” but contains the show-stopper element of Paul and George scatting “tit, tit, tit.” It was hardly noticed by the public.

The first time the Beatles would structure a song that runs one verse plus chorus and then advances directly to an instrumental section (note George’s overly treble Rickenbacker guitar). This is also a rare track where the middle eight (“Nowhere Man, please listen…”) appears twice in a song and contains different lyrics the second time around (“Nowhere man, don’t worry…”).

Two classic mid-career songs with near-identical middle eight structures, featuring the tight harmony between John and Paul. This one-two punch of sound would be established in this era (via albums Help, Beatles for Sale, and Rubber Soul) and continue throughout the rest of their career.

Paul has said that the chord change that emerges from this song’s middle eight was a revelation for him and John as songwriters. It was the first time they ventured off the path of conventional chord progressions. Paul has stated while describing their experience: “We wrote ‘From Me To You’ on the bus (too), it was great, that middle eight was a very big departure for us…..Say we were in a fairly ordinary C, to G, and then F change. Pretty ordinary, but then it goes ‘I got arms that long to hold you,’ and THAT’S a G Minor. Going to G Minor and C takes you to a whole new world! It was exciting!”

A ballad with no distinctive chorus, the middle eight (“Many times I’ve been alone…”) is the section that puts this classic in full bloom. The Beatles don’t have a lot of tear-jerkers in their canon but wrap this middle eight in Phil Spector’s orchestra and you have a firm audio platform for emotions.

Written by George originally as a separate song, this middle eight (that stretches 12 bars) is one of their strongest deliverables. This section contains a rare repeat in its melody line that is welded together by a descending chord progression. Its ending disappears into George’s guitar solo, which he performed live while George Martin was recording the song’s orchestrations. The middle eight was near-perfect until Frank Sinatra decided to sing: “You stick around, JACK, it may show” in his recorded version.

A graduate-level study in song building by the Beatles where everyone gets involved. A pinnacle for the Lennon-McCartney songwriting partnership, this middle eight may be their strongest offering. While McCartney sings of an ongoing dispute for the song’s verses and chorus, Lennon writes a more philosophical middle eight that “life is very short, and there’s no time…..” George goes on to suggest that they break into a ¾ waltz beat at the halfway point of the middle eight, and the group decides to round out the tune by repeating the middle eight.… A classic is born.

Post note: Many may ask why not consider the memorable middle part of “A Day in The Life” (“Woke up, got out of bed….”) as a top middle eight but the Beatles. For this writer, this appears as a separate section of a masterpiece and would not fit the category of a classic middle eight. It’s much too grand!