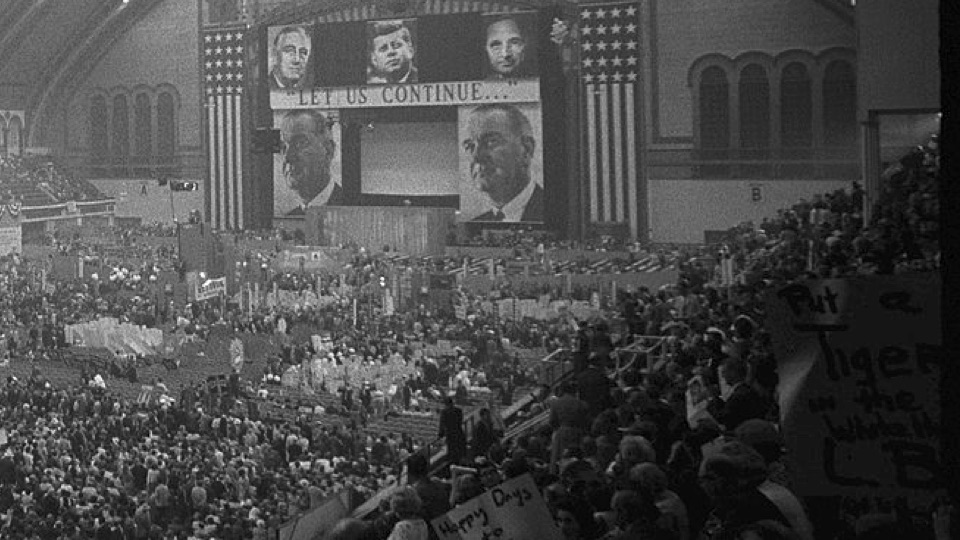 As political parties, activists, lawyers, and voters continue to wrangle over the outcome of the 2020 election, it’s interesting to glance back at elections in America’s past and discover that we are not singularly frustrated. Many, many other elections and conventions have been full of political contention and yes, even shenanigans. Here, Jude Southerland Kessler, author of The John Lennon Series, talks with respected Westinghouse Network journalist, Art Schreiber, about his coverage of the 1964 Democratic Convention in Atlantic City. They discuss some of the eye-brow raising events that occurred the very same year that The Beatles came to America. One week after the Democratic Convention, Schreiber joined The Beatles for their North American Tour. But first, he was on hand to witness the nomination of Lyndon Baines Johnson and Hubert Humphrey to the Democratic ticket.

Jude Southerland Kessler: Art, it’s an honor to be able to talk with you again. You and I have had so many conversations about the weeks you spent with The Beatles in 1964, but this is the first time we’ve gone into depth about the Democratic Convention and the 1964 election. I wanted the readers of CultureSonar to know that our 2020 election isn’t unique in its intricacies and disagreements. That happened in 1964 as well, didn’t it?

Kessler: Well, let’s start with one of the things that I think was most interesting about the 1964 political scene and that was the fact that since President Kennedy had been assassinated on the 22nd of November 1963, Lyndon Johnson had only been the President for about nine months. So, it wasn’t a fait accompli that he would run at all. In fact, Johnson waited until just days before the convention to announce that he was actually going to run for president. Why did he wait so late?

Schreiber: You know, Lyndon Johnson had a very difficult relationship with the Kennedys, and I think he was worried, of course, that Bobby was going to jump in there and run himself! Bobby didn’t, of course. He would — four years later in 1968 — but I think Lyndon was really worried that Bobby would get in there or that the Kennedys would oppose him. Now, apparently, he got that dilemma worked out, at least to his own satisfaction, and then he made the announcement. I’ve always believed that that was why he waited so long.

Related: “The Making of the President”

Kessler: Well, I know that Johnson was being pressured to ask Bobby Kennedy to be his running mate, and they disliked each other intensely. So, Lyndon solved that “sticky wicket” by establishing a last-minute mandate dictating that no one on his cabinet could be his running mate — effectively eliminating Bobby Kennedy. Were people up in arms about that?

Kessler: Yes. everything is known so instantly today. When the Archbishop of Canterbury was murdered inside the cathedral, it took 6 months for the news to reach Paris, and by the time the news finally got there, people shrugged and said, “Oh well, that was 6 months ago. What can we do about it now?” But today we know everything in seconds, don’t we? And that instantaneous impact changes things, doesn’t it?

Schreiber: Well, that’s right. You know, when I speak to young college students today or high school students, I always point out that we didn’t have cell phones back then; we didn’t have computers! Today, it’s difficult for people to understand that only five newsmen covered the first tour of The Beatles! Five! Today there’d be 300 reporters!

And back when John F. Kennedy (I called him “Jack” – we all did) ran for President, I can remember how Sander Vanocur, myself, and another AP reporter traveled with Jack and Jackie and Bobby. Sometimes, we were joined by reporter Kenny O’Donnell or Larry O’Brien or a couple of the other Kennedy workers. But we traveled with the Kennedys in the same limo – and we went from television station to television station in that car. It was Bobby’s idea. And here’s how it worked:

In those days, the evening news was only 15 minutes long on television. Just fifteen minutes! So, Bobby would book Jack to be at the very beginning of one’s station’s 10 O’Clock News. Then, Bobby would arrange Jack’s next television station interview to be in the middle of the program, and the final interview of the evening would be slated for the very end of the last news program. And that limo would rush us from one station to the other! We’d all run in, and Jackie and the three of us news people would stand in the corridor at the television station while Jack was rushed into the studio, and he was only interviewed for a minute…or maybe two at the most!! And then he’d come out, and we’d jump in the limo and rush to the next station! It was hectic! But we had to make it work because it was important that Jack get to as many local stations as possible. He was running against Hubert Humphrey, and he needed to win!

Related: “Revolution: The Beatles Speak Out”

Kessler: Well, interestingly enough Hubert Humphrey — Jack Kennedy’s rival in 1960 — was the very person chosen to be Lyndon Johnson’s running mate in 1964 instead of Bobby Kennedy! How did people feel about that selection?

Schreiber: Well, of course, there was a bit of head-shaking and grumbling. Hubert took a lot of criticism because he was not for the Vietnam War and Johnson, of course, was. And that was a big, big controversy between the two of them.

But from the beginning, Lyndon Johnson was about more than just Vietnam. That was just one of the issues. Lyndon Johnson wanted to pass the Civil Rights Bill. However, he knew the terrible fight he was going to have on his hands, and he knew Hubert would help him with that effort. You know, Lyndon and Richard Russell, the senator from Georgia, were great, great friends. But they split over the Civil Rights Bill and Lyndon knew he could not get Richard ever to vote for that bill. And he didn’t. So, Lyndon really needed the support that Humphrey’s backers would bring to the table.

Also, to this day Johnson gets a lot of criticism for his “War on Poverty” that was strongly opposed by Senator Barry Goldwater. Well, Hubert helped him with that as well. Both in 1964 and today, politics involves a lot of give and take.

Kessler: Art, when you were chosen by Westinghouse to cover the 1964 Democratic National Convention, you were given a very unique story to cover…a volatile story in politics that year: the Alabama delegation. Tell us about that.

Schreiber: Well, I was part of the broadcast team for Westinghouse because I spent so much time in the South with Martin Luther King and other Civil Rights leaders. I had been on the Selma-to-Montgomery March. I had also been on the Mississippi March with young James Meredith across Mississippi for black voting rights. And I knew so many people in Alabama politics that in 1964, I was assigned to the Alabama delegation at the Democratic convention.

Well, guess what? The very first night of the dang convention, the Alabama delegation walked out because George Wallace hadn’t been selected as the Democratic candidate for President! And so, I didn’t have anything to cover! [Laughing] George Wallace, as you can imagine, was extremely angry with Lyndon Johnson and with Hubert Humphrey – so the Alabama delegates just stood up and left!

Kessler: Incredible! See, that’s what we’re trying to tell people: 2020 isn’t the only time in American’s history that politics has been rather heated! In fact, I have to ask you about the Mississippi Freedom Democratic Party because it was headline news that at the 1964 convention. Mississippi had two different groups of delegates representing the state: one group supporting voting rights for blacks and the other group, against. Did you get involved with that story at all?

Schreiber: No, I knew about the split party, of course, but I wasn’t involved in it. But Jude, in 1964, politics was vicious, and they weren’t only fighting over Civil Rights. They had differences in how they were going to accomplish it! There was this big split between Dr. King and his nonviolence group and Malcolm X and his group. Malcolm X was opposed to King on nonviolence. And, you know, I think back on how many times I heard Martin Luther King in those bull sessions that we would have night after night in motels. He’d be talking to a couple of us news guys and to his people, like John Lewis and Stokely Carmichael and Ralph Abernathy. And as he talked, he’d use that famous line from his “I Have a Dream” speech. He’d tell us he looked forward to the day that his daughters would be judged not by the color of their skin but by the strength of their character. He sincerely believed in that, and he believed in bringing that about peacefully.

Kessler: Well Art, it sounds like things are not so far off from what they were in 1964, are they? Each of us is still battling to do what he or she thinks is right, and every election is crucial.

Schreiber: Yes, you know, I got to travel with Bobby Kennedy when he became a Senator, and I’ll always remember how he fought for Native Americans when no one else was fighting for them! It was just an incredible experience to have walked with Jack and with Bobby…with such great people. We never should’ve lost Martin Luther King, and we never should’ve lost Bobby Kennedy! A real tragedy.

Kessler: So very true. Well, Art, thank you for reminding us vividly that we’re not the only decade to grapple with political difficulties and for pointing out that our world today isn’t so far removed from the way it’s always been. It has been a rare treat to view politics of the 1960s from your experienced eyes and to learn from all you shared and accomplished. I appreciate you so much!

To learn more about Art Schreiber and to purchase read his wonderful book Out of Sight go to: http://www.artschreiber.com/