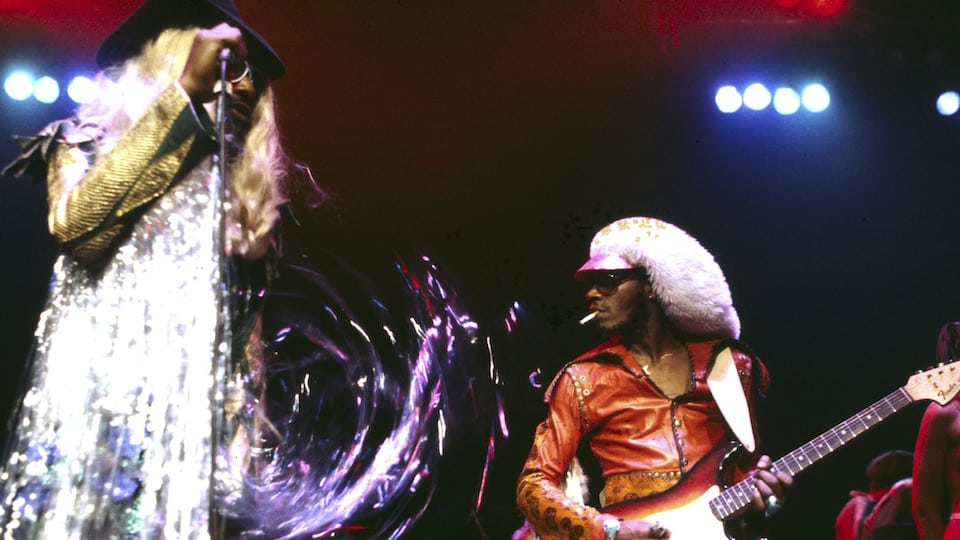 Exactly 40 years ago, the musical collective known as Parliament-Funkadelic was enjoying their most successful year ever, one that resulted in a series of genre-defining and genre-defying albums that yielded a string of gold and platinum awards. It’s worth noting that the groundwork for this journey actually started in December of 1977 with the release of Funkentelechy Vs. The Placebo Syndrome, an extraordinary album that wouldn’t take full flight until the following year. What follows is a “bump by bump” rundown on how George Clinton, Bootsy Collins, and the rest of P-Funk were transformed into international superstars in the span of a mere twelve months.

Parliament’s “Flashlight” is released by Casablanca Records and immediately becomes the band’s first number one hit on the Billboard R&B singles charts. It would eventually attain gold status — one million units sold — by May of the same year. Meanwhile, Player of the Year by Bootsy’s Rubber Band is released by Warner Bros Records on Jan. 27, soon thereafter peaking at number one on Billboard’s R&B album chart with “Bootzilla” becoming that band’s first number one single on the charts (ironically knocking “Flashlight” out of the top spot).

On the 22nd of this month, Funkadelic’s One Nation Under a Groove is released on Warner Bros Records. The album and title track single both hit the top of the Billboard R&B charts. Both become certified million sellers and eventually become Funkadelic’s biggest releases (and also feature ex-Ohio Player Walter Junie Morrison). Shortly thereafter, the Brides of Funkenstein — consisting of former P-Funk/Sly Stone background vocalists Lynn Mabry and Dawn Silva — release their debut album Funk or Walk on Atlantic Records. The album’s first single “Disco to Go” climbs all the way to number seven on the Billboard R&B singles charts.

Parliament releases the LP Motor Booty Affair on Nov. 20. The album quickly achieves gold status (over 500,000 copies sold), makes it all the way to number two on the R&B album charts while the album’s first single “Aqua Boogie” reaches number one on the R&B singles charts.

P-Funk closes out a spectacular year with the debut album of keyboardist-composer Bernie Worrell: All the Woo in the World (released by Arista Records). Here, the one-time musical director of P-Funk takes center stage, assisted by musical cohorts Bootsy Collins, Garry Shider, and of course, the good doctor his self, George Clinton. The stand out track on this particular project is the Clinton-Collins-Worrell penned masterpiece, “Insurance Man for the Funk.” There were also a number of projects done by former P-Funk members that were not produced by George Clinton, including another from Arista Records: the self-titled debut LP of the short-lived band Quazar, led by former P-Funk vocalist Glenn Goins who would sadly pass away from Hodgkins Lymphoma on Jul. 29 of this very year. Lastly, fellow P-Funk vocalist Clarence Fuzzy Haskins released his second album on Westbound Records entitled Radio Active. Like we said, 1978 was the year that Parliament-Funkadelic ruled the universe.

38 comments on “1978: The Year That Parliament-Funkadelic Ruled The Universe”