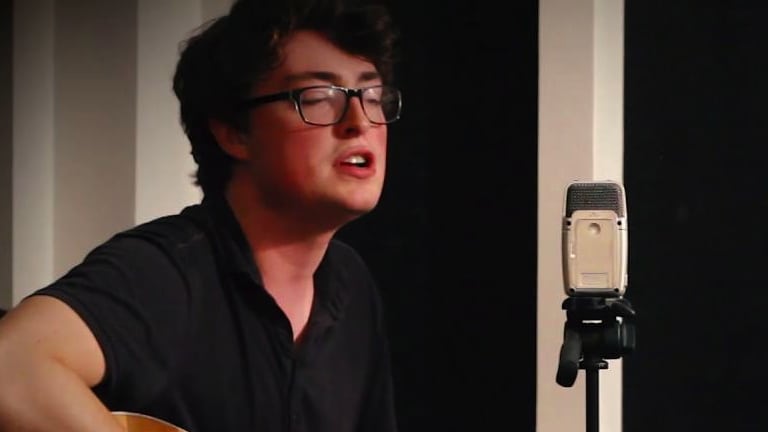 Singer-songwriter Carson McKee isn’t simply one half of the country-folk duo The Other Favorites (which recently released a new album, Naysayer). Sometimes, he’s also one half of Wine & Vinyl, the CultureSonar web series — hosted by his band-mate and buddy Josh Turner — that pairs classic albums with equally memorable vintages. These two musicians have a long history together having met in middle school (more on that shortly). In the following interview, McKee enlightens us on the power of Pinot Noir, his not-so-secret craving to have a conceptual video shot, and why nothing beats playing music in his hometown.

Related: See all the episodes of Wine & Vinyl here.

Q: When did you first pair up with Josh?

A: Josh and I met auditioning for our eighth-grade talent show in Charlotte, North Carolina. I was born and raised there; his family had recently moved from Cincinnati. Our classmate Cole Gage was actually the instigator of the band – he approached us after the show and asked if we wanted to be in a bluegrass group. I knew from the outset that Josh and I had a certain chemistry…we were kind of yin and yang; I sang lead and played rhythm guitar and Josh sang harmony and played lead. Our voices blended together surprisingly well, sort of the way family members’ voices do. I believe the first original tune we worked on together was “Flawed Recording,” and from that collaboration on, I realized that we had tapped into something unique.

Q: You co-host on a few episodes of the CultureSonar series Wine & Vinyl. Does drinking wine impact the actual conversation you two are having?

A: A bit of wine can certainly loosen us up, but we’re goofballs even without. Tasting the bottle we’re discussing is essential to the process, though – comparing a drink to a record is a bit of a conceptual/creative endeavor, so letting the flavor and the experience guide us in the moment provides a foundation to extemporize around. In the case of the Gaucho episode, I’ve listened to the record probably a thousand times and can get it playing in my head if I need to analyze a particular sound or section, but I’d had zero experience with the Sandhi Pinot Noir…matching the spirit and character of the wine to my memory of the record in real time is what made the episode an interesting challenge.

Q: For the series, you usually pair a wine with a particular album but if you were to work in reverse, what might you pair with a bottle of Chianti?

A: Anthony Hopkins’s 2012 project Composer, without a doubt. I’d also recommend some fava beans with that. In all seriousness, I’m not totally sure; Josh is definitely the sommelier of the band. My instinct would be to pair Chianti with something quintessentially airy and Italian…folk music of some variety. Perhaps that’s an easy/stereotypical answer. I’ll consult with Josh.

Q: You two have created a number of homemade videos for songs off your new album Naysayer. If you could have anyone direct your music video, who might that be? What song would you want to use? Details, please!

A: Give us a huge budget and a crew and let us do it! I’d love to work with an innovative cinematographer like Emmanuel Lubezki – maybe fiddle around with filming a music video in a single shot or using some sort of moving set. “Solid Ground” and “House of Yes” would probably lend themselves best to more conceptually-oriented videos given that they revolve around surreal lyrical vignettes. I’d want to push the envelope a bit and try something odd.

Q: Do you guys play all the instruments on Naysayer?

A: We don’t! The fiddle and mandolin player, Grant Flick, and the bassist, Jacob Warren, are musicians Josh met at The Acoustic Music Seminar at the Savannah Music Festival in 2015. They’re some of the most incredible musicians I’ve ever had the pleasure of working with – they rehearsed using demo versions of the tunes before coming into the studio, then spent maybe thirty minutes before tracking each song to arrange their parts. “Coney Island Fair” and “Saturn Rising” in particular really became convincing pieces with the addition of their talents. The drummer was Joe Howard, a coworker of the producer and recording engineer, Andy Riehle. He did a killer job despite having very, very shaky scratch tracks to work with, and given the fact that he had to contend with our obsessive quest to make the kit sound as late-‘70s as possible. Josh and I both drum a bit, but nothing beats having a true professional like Joe in the studio taking care of business.

Q: What’s your personal favorite song to play off Naysayer?

A: “House of Yes”. It’s fun to waltz around in that country ¾ feel – and “House of Yes” is one of the tunes I’m most proud of lyrically. I wanted to capture the sense I’d had of being overwhelmed by all the beautiful weirdness of Brooklyn – crazy characters, wild nights in strange clubs – and wrapping a narrative about those bizarre experiences around a traditional country structure gives the song a kind of emotional dissonance that I’ve always admired in the work of other songwriters. Josh and I had the opportunity to play “House of Yes” live with Jacob and Grant while we were in Milwaukee recording the album, which was a truly flooring experience.

Q: You guys have done quite a bit of touring. What’s your favorite city to play in?

A: Pete’s Candy Store in Williamsburg, Brooklyn is a favorite haunt of ours. That’s one of the first places I performed in the city. The stage is in a small back room that has this vintage speakeasy feel to it, and the audience is always up-close and engaged. Josh and I have been fortunate enough to play shows as far away as Brittany and the Big Island of Hawaii too – our shows in Plabennec and Waimea were so surreal in their loveliness that it was like being in a dream. To me, though, it’s always hard to beat going home to Charlotte… Nothing gets the energy of a place going like having your family there dancing and singing along.

Photo Credit: Image of Carson McKee courtesy of the artist.